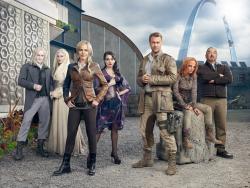 The televised sci-fi genre at it’s best is an exercise in world building. Large numbers of episodes combined with story lines that often require some degree of exploration require massive worlds, multiple races to inhabit those worlds, technology that those civilizations can wield, and traditions that seem foreign without entering the uncanny valley (unless of course, the writer deliberately wishes to emphasize that). It is from this tradition that Defiance emerges, it’s world having not only to be large enough to fit a TV show, but a full scale online third person shooter as well (the two are tied and marketed as equals, as opposed to one existing solely as a vehicle to profit off of the other).

Defiance is set in the slightly futuristic earth of the middle 21st century, in Defiance, a town that was formerly St. Louis. Much has happened in the 30 years between our world, and theirs however: Aliens have landed on earth, bringing advanced technology. This led to eventual war between humans and the Votans that lasted well over a decade. 15 years after this war, Josh Nolan (Grant Bowler), returns to Defiance to see a lawless border town and becomes its’ chief lawman, trying to prevent all mayhem from breaking loose between humans, Votans, and military scavengers.

When reviewing any sort of sci-fi, my focus will immediately gravitate towards the visuals. Defiance definitely brings the sort of visual effects that one would expect from a show that mixes aliens and Mad Max. The show’s wide angle, ark, and space oriented shots are particularly breathtaking, often providing the sort of ethereal glow one would expect from alien technology. One minor quibble, and one anyone whose ever seen Star Wars will make though: doesn’t underground kingpin Datak Tarr’s (Tony Curran) heavy look a little too much like Chewbacca to be a coincidence? Similarly Irisa (Stephanie Leonidas) looks like a palate swapped Na’vi.

The pilot is incredibly entertaining, as it bounces around a number of areas and incredibly implausible scenarios, giving large amount of insight on a number of characters in a very short amount of time. While many of these characters seem to be cherry picked from your standard issue science fiction tropes (A roguish hero? I’ve never seen that before), Defiance also mixes in your fair share of political drama and story line between two rival families that seems straight out of Dallas. It is also incredibly well paced, taking advantage of its’ two hour time frame to create a story line more out of a movie than a TV show.

One thing I cannot knock is the acting. Most of the Votan seem slightly socially inept while being just human enough to survive in a world full of humans. Graham Greene and Tony Curran both click excellently as rival family heads looking to one up each other even though the Tarr’s control the metaphorical underworld and the Macauley’s control the literal underworld (mining). Similarly, Stephanie Leonidas does an incredible job portraying Irisa as an emotionally aloof and immature alien thrust into a situation much bigger than either she nor Nolan recognize it to be.

The Final Verdict: Defiance might be the closest thing I’ve seen to a live-action Cowboy Bebop  that I’ve ever seen. While it seems to blatantly kidnap from aspects of the science fiction playbook (there’s a twist about ¾ of the way through that’s horrendously telegraphed because it happens to be  an exact copy of a similar character’s arc in Star Wars), the novel aspects of the show (most notably the Hatfield-McCoy style rivalry of the Macauley’s and the Tarr’s, and Mayor Rosewater’s “little mayor that couldn’t” routine) are enough to distance those similarities into the back of your mind. It’s worth checking out if sci-fi is your sort of taste, though I have no idea what effect the tie-in with its’ video game will have in terms of the long term quality of the show.

On an unrelated note, I would like to take a minute to express my condolences for those whom were lost in Monday’s Boston Marathon bombing and wish a speedy recovery to those whom were injured. My thoughts and prayers are with you all.