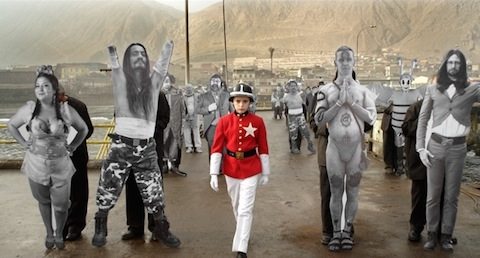 The first time I ever saw Amarcord, I had had my wisdom teeth removed and was on some pain killer that contained codeine. My mind slipped in and out of attentiveness as for one moment there are young boys frolicking with naked large women, another moment Nazis and dancing through the streets, and at any moment silly or sober everyone’s uniform was more or less some form of clown caricature.

Jodorowsky’s Dance of Reality roughly matches this experience, though it’s only slightly less somniferous than actually being on codeine. Like Amarcord, Dance of Reality is an autobiography in the small vignettes projected through the kaleidoscope of the Carnivalesque. Jodorowsky returns to filmmaking after 23 years of expanding into other media such as Tarot decks and comic books, to explore his own childhood with his usual in absurdist spiritualism, slaughtered animals, and background characters of various deformities.

The story follows young Alejandrito, child of a family of Russian Jews in Ibanez’ Chile.  His father Jaime Jodorowsky is a strictly atheistic, high strung admirer of Stalin, and his mother Sara Jodorowsky a heavily bosomed and spiritual mediator who delivers her lines entirely in libretto (sometimes to the tune of the score, sometimes not). The underlying structure of the movie is difficult to sum up without going into detail about all the various trials and tribulations of the family, but overall Jodorowsky the younger has to deal with his father’s constant and sometimes contrary attentions toward masculinity, pride, and appearance even as such attitudes eat away at Jaime, leading him ultimately on a spiritual adventure after a few near-fatal run-ins with Ibanez himself. Jodorowsky himself shows up as a guardian angel to comment on the proceedings and to give his younger self much needed sympathy.

Sara acts as the spiritual conduit between them, often providing just the right ritual, observation, or  attention to save the two men from themselves. Though her esteem grows in both men’s views, it raises from zero in the case of Jaime whilst grows larger for the adoring Alejandro.

Perhaps because of the autobiographical nature of the stories, or perhaps because of his age, Jodorowsky has contained himself somewhat on the freakshow aspects. He also seems to be taking the opportunity of digital production to make add even more saturated colors and even a bit of computer generated effects.  The uncanny valley of CGI works in Jodorowsky’s favor here since the movie already looks and feels so strange anyway.

Certainly the movie manages to slip in and out of a solid dreamy feel, though like Jodorowsky’s other movies, its loose structure and whimsical tangents eventually promote exhaustion rather than awe. Jodorowsky has this terrible habit of running a movie a good half an hour or more longer than its purpose, and at least in this movie the fat is between the scenes instead of loaded at the end. Like a codeine trip, it is at points aware and attentive, and at other points only seems like you’ve nodded off a bit, but with a stronger awareness of passing time. And hey, this time it doesn’t seem like he actually put his actors on LSD. Hopefully. At least I don’t think he did.

One of the better aspects of the movie is the costuming. Jodorowsky starts right off with clowns, but from there forward most people have costumes just like their usual uniform in society – except the exaggerated colors and design go to show that even in the way we dress, we caricature ourselves. The same sort of Carnivalesque joke underlines all of the production design, even in the case of the landscapes he chooses to shoot (broad oceans and absurdly large mountains). So the movie is a consistently a pleasure to watch on that visual level.