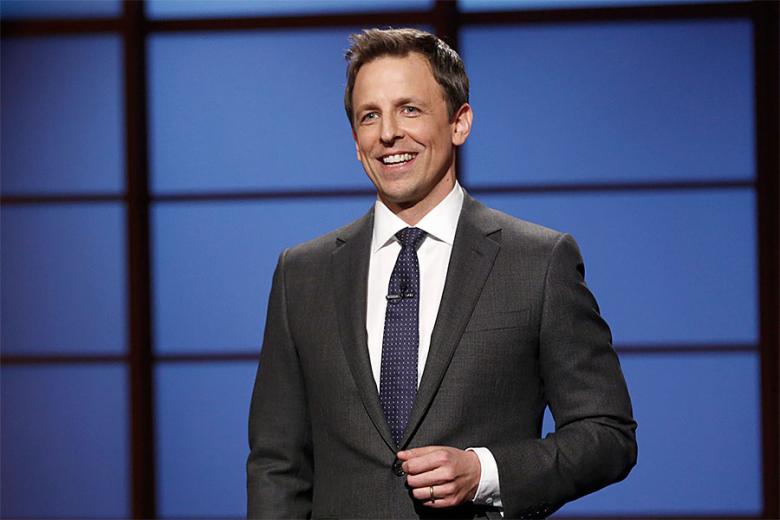 Seth’s Hosting Job: I think Seth did a great job at keeping the proceedings going, but at times the show hit a very late night vibe with minimal grandiosity. This may be in part because his monologue was so brief and he was introduced with minimal fanfare (there wasn’t much of an opening credit sequence that you tend to see in awards shows), but what should be considered one of the big four awards shows almost seemed infinitely smaller than it should have. His monologue was not only short but seemed to fall fairly flat with the crowd, which was unfortunate because it was actually very funny, but the crowd seemed to appreciate the jokes more as the night went on.

The Show Itself: This show seemed to completely lack luster from well before the show even began (as one can expect from a show that scared off of a Sunday for the friggin VMA’s). Normally from awards shows we expect a pompous overblown affair with tons of glad-handing, self-aggrandizing, multiple sets and set changes and **shiver** overwrought musical numbers, however we got a bare minimum of those tonight. The one area the show completely dominated over the prior edition however, was in it’s memoriam segment, while last year we got six funeral dirges, this year we got one simple, classy, memoriam with Billy Crystal providing the best awards show eulogy for a man I’ve ever seen in his speech about Robin Williams.

It was a surprisingly good night to be CBS (or Modern Family): If last year was the story of cable and Netflix burying those last shovels of dirt on the big four, then this year would be about the big four making the most of their nominations. CBS picked up three Emmys on three different shows (Allison Janney for Mom, Jim Parsons for The Big Bang Theory and Juliana Margulies for The Good Wife). Modern Family also picked up a trio of Emmys for Best Supporting Actor, Best Directing and Best Comedy Series, meaning that yes, those pesky broadcast networks managed to pick up all but two of the major comedy awards tonight.

Breaking Bad Gets A Stunning Victory Lap: Up until the 10pm hour, the story of this night seemed to be parity. The comedy category split awards between five different shows (Modern Family, Louie, Veep, Mom and The Big Bang Theory), The miniseries hour saw similar division. However, once 10 pm hit, it was win after win after win for the last half-season of Breaking Bad. The final list included Best Supporting Actor (Aaron Paul), Best Supporting Actress (Anna Gunn), Writing (Moira Walley-Beckett for Ozymandias), Best Actor in a Drama (Bryan Cranston), and Best Drama Series.

On the Red Carpet Front: The story of this night on the red carpets is most definitely the color red. You could find red dresses anywhere on the red carpet, from Heidi Klum to E! Host Giuliana Rancic to Julia-Louis Dreyfuss and Christina Hendricks. While red is typically a very bold choice, the color seemed to work equally well on everyone wearing it even as the cuts varied wildly.

In terms of winners and losers, this is a night with way more winners than losers, especially on the comedy side. In addition to the red dress brigade, I was a big fan of Sofia Vergara’s white and gold combo, Sarah Silverman’s jade green dress, and . I think the big winner of the night was Laverne Cox who shone through the sea of champagne and red with an amazing and downright sexy white dress.

What didn’t work on the red carpet? I wasn’t a fan of Lena Dunham’s light pink look. While Dunham typically goes for something a little more anti-fashion as a rule, the dress, her skin, and her hair somehow managed to clash horrendously. Similarly Hayden Pannettiere’s decision to combine a deep plunging neckline and a third trimester baby bump just did not work for me. But for me, the biggest loser of the night was clearly E!’s clutch cam, which didn’t provide either the scandal, entertainment value or buzz (seriously people, it’s a bag – I may watch red carpet but I draw the line at accessories).

The Night In Speeches: In keeping with the pace of the show, everything seemed quick and to the point. Ty Burrell opened up the night with a pretty funny speech written from the kids on the cast of Modern Family. Sarah Silverman gave a similarly funny but incredibly winged speech after winning the writing award for her recent comedy special on HBO – thanking her agents while naming them after The Three Stooges and a number of other close confidants in one of the rare speeches that can be categorized as both short and rambling.

Steven Colbert and Jimmy Fallon teamed up after a flub filled award win for The Colbert Report to put together a pretty funny speech in which Colbert put words in Fallon’s mouth ultimately forcing the censors to jump in (in retrospect, I wonder why NBC didn’t offer Fallon the gig, he seems tailor made for stuff like this). Weirdly enough, the funniest speech of the night was Bryan Cranston’s self deprecating speech for Best Actor in A Drama

In Summation: This was a surprisingly tight show, fitting pretty squarely inside the 3 hour window NBC gave for the show. The Emmys also managed to avoid the funeral dirge angle that last year had with it’s six memoriam segments (five spotlights and the one usual montage) but also still seemed to miss the celebratory nature of these sort of shows. I think that the blame rests squarely on NBC, whom clearly treated this show as an afterthought (there’s still time left in the broadcast, let’s rush Vince Gilligan offstage in the last award of the night!), with little pomp and less circumstance. I don’t necessarily think that the show was bad, just lacking in star power (the only music segment featured “Weird Al”) and grandiosity (when you’re taking the backseat to the lowest wattage VMA’s in recent memory in spectacle, you’re clearly doing something wrong) and almost felt that the awards were reduced to a formality – a function i’m willing to guess was in part a result of the lack of love the peacock got in the nominating process (CBS and ABC did quite fine thank you).

Last but not least, this is my last day at Manhattan Digest, so I want to take this moment to thank Ryan for giving me a forum to grouse about TV over the last year and a half. It’s kinda crazy to see how I’ve grown as a writer and even moreso as a pop-culture consumer (lets just say I’ve watched more E! and Bravo in the last year and a half than I had any business doing in the 26 years of my life prior). I also want to thank all of you whom have read, commented, and devoted a little bit of time to reading this.