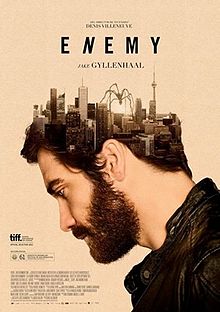 I’ll be honest, I feel that to review a film like Enemy will spoil the experience. It’s a movie that’s all the better when viewers go in with as little knowledge as possible about it, as well as a film that I feel is very different from what it’s advertised as, but for once I am okay with that fact. The film was presented more as a conventional thriller involving a doppelgänger in it’s trailer, while in reality it’s far more uninhibited to be simply seen as a genre picture. It’s an art house film, that uses it’s guise as a thriller to play with our expectations, even when it’s so ostensibly trying more to mystify, rather than thrill.

The film at first follows the character of Adam Bell(Jake Gyllenhaal), a history professor living in Toronto, who seems rather distraught and unexcited by his repetitive life, which seems to consist mainly of work and having sex with his girlfriend Mary (Melanie Laurent). One day a co-worker of his recommends that he check out a movie, when he notices that there’s an actor in the film that looks exactly like him. After doing some research he discovers that this man’s name is Anthony St. Claire, and decides to get in contact with him. We eventually discover that Anthony also lives in Toronto, and is married to a pregnant woman, Marie (Sarah Gadon). As  Adam and Anthony’s two worlds collide, they both find themselves and the women they loved caught in a very tumultuous ride, that progresses in a way no one would expect.

Enemy marks the second time that Canadian director Denis Villeneuve and Jake Gyllenhaal have collaborated, after last year’s sleeper hit Prisoners. While that film demonstrated that Villeneuve could add grit and an emotional factor to a conventional studio-released crime drama, Enemy is much more a return to the art house sensibilities he showed in his earlier work such as Polytechnique and Incendies. The film is very abstract, and has recurring imagery and symbolism pop up throughout it, and it also wears it’s influences on it’s sleeve. It’s has more than a passing resemblance to films like Eyes Wide Shut and Persona, with it’s themes of duality, lust and imagined realities. On a more surface image, however, Jake Gyllenhaal’s dual-performance calls to mind Jeremy Irons in Cronenberg’s doppelganger classic Dead Ringers. Of even more merit though, the movie also is self-aware of it’s position as a movie (it’s no accident that Adam discovers his double while watching a film), and it’s clear that Villeneuve had a lot of fun making it, and exploring his knowledge on film theory.

Jake Gylenhaal also possibly gives his best performance here. He portrays both characters differently, yet with a nuance of sameness to let viewers suspect parallels between them. The women in their lives also appear well cast, with Laurent and Gadon coming off both as sexy, believable and eerie for the film’s tone, with the latter giving a particularly brave and ambiguous portrayal of a mother-to-be. Also, Isabella Rossellini’s holds a small role in the film, but symbolically, her moments might come as the apex. Longtime appreciators of the renowned Italian actress will be simply delighted in her casting, as well as formulate their own meanings on what her presence conveys.

Many people will leave Enemy frustrated, as the movie doesn’t give any clear-cut answers for any of the plot’s questions, and it ends on a note that is both sudden and bizarre. It’s unfortunate though, as those people will be missing out on what a taut and intriguing puzzle the film is. It’s carefully paced and delivered up to the film’s dynamic climax, and at a snug 90 minutes it really does feel entirely compact and necessary. I just can’t help but go back to certain scenes in the film and analyze them again-and-again and see how they correlate to the cumulative experience, a quality that I wish was present in more movies. It’s a film that everyone will have their own interpretation for, but I feel most will agree on one thing: Enemy is pure cinema.