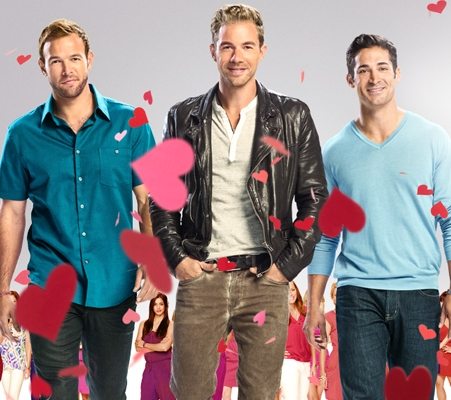 The dating show is an interesting specimen that’s evolved with TV over the past half a century. We started with the bubbly dating game show in the Dating Game evolved to the video-dating style of Love Connection and eventually to the reality model of The Bachelor. NBC is banking on the idea that the dating show can move into the American Idol competition age with it’s latest offering.

From executive producer Eva Longoria, Ready For Love is built around matchmakers searching for Mrs. Right for three very eligible bachelors: civil engineer Ernesto Arguello, financier Ben Patton, and Plain White T’s singer Tim Lopez. These men, with the help of their matchmakers, will then try to figure out which (if any) of the twelve lucky bachelorettes will be their perfect soul mate.

Tonight’s episode focuses solely on Tim Lopez (gee, I wonder whom NBC is marketing as the star on this show?) while next week introduces Ernesto and Ben. The show also takes time to introduce it’s matchmakers, including Amber Kelleher (who takes the fairy tale angle), Matt Hussey (focused on the male), and Tracy McMillan (the straight shooter).

Our show begins with Longoria opening with a brief explanation of how the show works, and it’s emphasis on finding the perfect match vs. a casting angle. This then led into a 6 minute-long expository preview video that didn’t give many details as to how this competition works. From there our bachelors must remove three contestants straight off of the bat before they ever lay eyes on their respective suitors. A spanner is immediately thrown in the works as one of the suitor’s in Matt’s pool has a past with Tim. From there we switch to more video packages, where our first set of suitors move into their house and the matchmakers give last second advice before their big first date.

Our second hour kicks off with the girls showing up for their big first group date with Tim, who immediately shows a sense of humor by fake-ratcheting up pressure before putting on a concert for all of the girls. He then has the suitors’ write lyrics to a new song he was working on, which they then sing in groups split up by matchmaker. We also get our first example of gamesmanship, as Leah, the girl from Tim’s past, isolates him for a short period of time, raising the suspicions of our other contestants. After the dating segment, our suitors’ rejoin the matchmakers in the studio, who critique them on their performance in a manner once again not far removed from your standard issue competition show. Each judge then sends one of their “team” up for elimination, with Tim ultimately choosing one to come home. After sparing one of the girls, Tim and the two remaining girls go down to the “garden room” to eliminate one of the girls.

Our hosts Bill and Giuliana Rancic seem passable in that role, but sometimes come off a touch maudlin, as if they were introducing the In memoriam segment of an awards show. It feels very counterproductive, however, that the hosts often work solo, with Giuliana single-handedly emceeing our first hour. Additionally, some of the platitudes felt odd and slightly redundant (at one point Giuliana said “Three of you will be in the bottom three”. In spite of that, Giuliana manages to show incredible efficiency at stoking the fire, making a large issue of the Leah power-play that occurred during the date. Bill, however, seems like complete window dressing, there solely to make the married couple host gimmick work.

Ready for Love seems to borrow liberally from The Voice with the first two episodes being a pretty blatant copy of The Voice’s blind auditions. Additionally, much like it’s lead-in, the show posits our bachelors’ search for love as a competition between the matchmakers (whom also double as our suitors’ coaches). Similarly, all in-studio criticism feels like they are analyzing these girls like its’ a performance art or worse yet some sort of sick experiment in how to get a guy to fall in love with you, which completely counteracts the whole “finding real love vs. the fake love of reality TV” nature of the show that Longoria promised.

This may be the first episode, but the show moves at a glacial pace with large numbers of long and ultimately irrelevant video montages (it’s bumps run a minute plus a clip, and Tim, all three matchmakers and the show itself all receive lengthy video packages). This seems particularly egregious when you consider that each episode runs a way too long two hours and the third set of blind picks were rushed to make room for more irrelevant video montages after devoting two segments a piece to each of the first two batches of contestants. This is made worse when you consider that every major twist is turned into a cliffhanger that leads into a commercial break mid-sentence and that every commercial break is preceded by constant previews of the same 30 seconds of next week.

The show works best once it moves back within the reality paradigm, as it allows the show to play with its’ cast’s personalities (Hailey’s the funny one, Leah is the girl from the past, Christina is the serious one with the Musical Talent). Unfortunately, it is also a slave to many of the genre’s cliches (the three girls who get the most screen time during the date are inevitably your bottom three). This is a shame, as less of the time is focused on building the relationships than the gimmicky and half baked in-studio segments.

The Final Verdict: It’s bloated, it’s exposition is in all of the wrong places, and it starts throwing in twists before it can even establish a format. In a lot of ways Ready for Love is a hot mess that wants to have its’ cake of being a Bachelor clone, while also eating from the ratings cake of its’ Voice lead-in. Any ethical concerns aside about love being a competition, the show suffers from terrible pacing that bogs down any action. Would it have really killed the producers to eschew that opening 10 minutes and half of the bumps for a full third blind audition segment and/or to introduce us to the rest of Tim’s suitors in the date segment? Skip this one, it doesn’t do romance any favors and there are better ways to spend two hours of your Tuesday night.