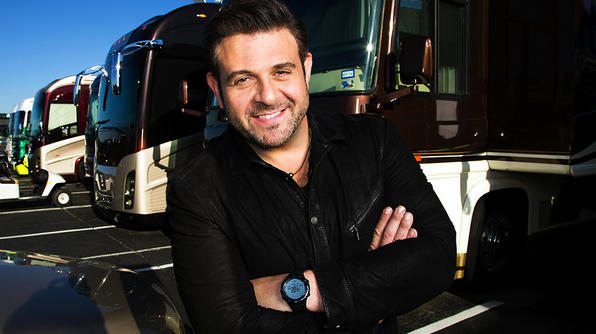 Five years ago, we were introduced to Adam Richman, a mere mortal who went forth and attempted to take on our nation’s most treasured eating challenges in Man vs. Food. In that time, we have clearly seen that despite the fact that it ultimately ends in our gullets, food still wins an alarmingly high amount of the time. That show ended not because of slipping ratings but because of Richman’s retirement from competitive eating and the inevitable toll such a show has to take on one’s health. But fear not, as Richman is back to show the world more waistline-obliterating culinary delights on his newest series: Adam Richman’s Fandemonium.

Fandemonium follows Richman as he travels around the country spending time with some of America’s most prestigious tailgating fan bases. This entails not only football events, but also NASCAR races, the Kentucky Derby, and even arctic sled races. It is here that he gets to eat considerably healthier portions of the best tailgating has to offer while bringing his own takes on pre-game meals in return. Along the way, we learn more about these events and why they attract legions of dedicated fans every year.

Our premiere episode has Adam exploring the super fans of the Daytona 500. Richman begins by looking at the high end trailers on the man-made Lake Lloyd. Here, people pay $3,000 to park their high end RV’s (the two shown each have an estimated cost in the high-six to low-seven digits). From there, he moves to the considerably cheaper (and trashier) Tent City and you can tell the vibe is very different. In tent city, he encounters an all-food replica of the track with over $300 in groceries. He also checks out some of the finest barbecue in Tent City, including a roast pork shoulder that has been three days in the works. Finally, we sample some of the nightlife out in the tents, including drunk wheelbarrow racing and an infield discotheque.

So, does this show do justice to the notions of food, fun, and community? Well, it’s safe to say that the show is extremely similar to it’s predecessor. Adam’s wild eyed enthusiasm and gameness for anything are a perfect match for the show, as it really allows for Richman to show off a “man of the people” persona. That persona is essential for making Fandemonium work, as it truly feels like an insider’s guide to tailgating as opposed to the more academic travel shows you might see on public television. It’s also nice to see Richman’s personal culinary trappings, including a cool hybrid of pulled pork and waffles that he gives as a thank you (in the brief end of every show) to the people who let him in to their world for a little while.

The Final Verdict: Adam Richman’s Fandemonium is an interesting take on the foodie tour sort of show that Travel Channel has become known for in recent years. It’s also the best showcase for Richman yet, as his willingness to join in on the craziness (an episode in Florida has him flying around in a mud buggy without a seat belt at the insistence of the owner, and his dance at the end of the Daytona episode is hysterical) truly sells the tailgater street-cred of the show. While the show runs up against some stiff competition (notably The Newsroom), it’s completely worth checking out, regardless of your interest in the subject that week.