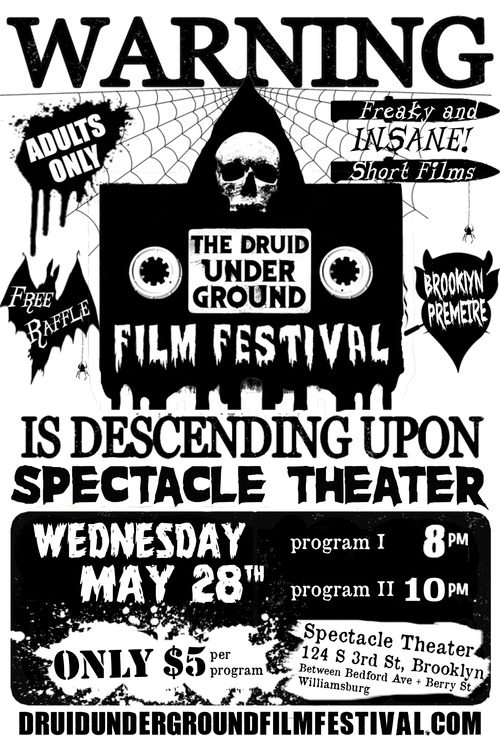 But what does ‘underground film’ mean? ‘Underground’ is the type of word that provokes strong expectations, but those expectations will vary person to person. Underground implies both independence and some significant degree of obscurity; it’s rarely used as a pejorative but the implication is that it should be. With increased accessibility of the Internet, is anything truly ‘underground’ anymore?

In 2011 I attended the Alternative Film and Video Festival in Belgrade, a festival for ex-Yugoslavian and international experimental film. Each year during the festival the festival hosts hold a panel discussion where they discuss the semantics behind their choice of the term ‘alternative’ to describe the particular type of movies they show.

The problem is, many forms of experimental filmmaking are no longer really ‘experimental’ in the sense that the filmmakers making them are drawing from a rich tradition of specific cinematic techniques. Or to call it ‘amateur cinema’ implies that it’s unprofessional even though the original term ‘amateur’ meant ‘lover-of’ or lover practitioner instead of trade practitioner. ‘Independent’ cinema has not only been taken by more or less American groups of non-studio feature length filmmakers, but the dimunization ‘Indie’ refers to a genre of youth stories featuring specific tropes.

Sometimes it’s called ‘non-narrative’ or ‘anti-narrative’ cinema even though some of it has a narrative. Sometimes it’s ‘subversive’ cinema even if it doesn’t particularly subvert any real or theoretical authority. Bryan Konefsky of Basement Films in Albuquerque calls it ‘undependent cinema,’ as in cinema released from the dependence of market, genre, or other established forms.

So anyway, what the hell does ‘underground’ even mean? It turns out that this two day event was bookended by two found footage films (actual found footage, not the horror movie subgenre popularized by cheap disposable income teen money seeking substudios), the first by Billy Burgess himself and the second from a Massachusetts VHS mixup collective called The Whore Church. These presentations could be considered the thesis statement and conclusion of Burgess’ programming tastes respectively.

Burgess’ Self Defense and the Occult for Teens and Law Enforcement is a mashup of Christian, instructional, law enforcement, cult movies, and related content featuring witches, troubled teens, and a fairly linear progression from outright existential anxiety to mystic world destruction. The story itself is fun, but Burgess’ selection of content (self-professed to be administered by a mixture of drunkenness and instinct) is pretty much like his curating of the festival as a whole: a sort of glorifying abject attraction to sensationalistic sub- or countercultural communities.

The Whore Church Mixtape Vol 1 is very similar, except that Night II turned out to be more explicit (perhaps even pornographic) than Night I, and so was this found footage film to Burgess’ own.

Which would all be silly and even merely overstimulating if it weren’t for the fact that occasionally you can tell that the subjects featured in the films represent what some people actually feel, believe, or even do in real life. ‘Real life’ being somewhat of a misplaced term here, being that each of these people and communities represented all seem to live in their own warped geography of reality, whether they consider themselves to be the authority or anti-authority. Fear of witches isn’t significantly different than fear of communism or fear of youth, hence ‘witchhunt.’

Basically, the Druid Underground Film Festival makes the argument that boiling under the surface of culture are subcultures, one and all ready to pop… or preferably explode. And yes, most of the films are fictional, but those that are fictional often function in and of themselves as attacks on the overhead pressure of non-underground society. When not fictional, such as the Jan Soldat film ‘Law and Order’ featuring an aged S&M couple who’ve been together in East Berlin since before the wall fell, it just punctuates the fact that much of the content shown is not as much wish-fulfillment fantasy as perhaps some people would want it to be.

Most of the footage was lo-fi, either being shot that way or an accident of the copying and compression for presentation. There were a couple stand out technical films that only serve to make the whole presentation feel weirder. One was Clown Town, an Expressionist film either shot at a very low frame rate or possibly even stop-motion animated (of live actors) that leads an uncanny motion quality that will fuck your dreams. Another was the viral video “Danielle”, the compositing production where a woman ages from infant to elderly in five minutes (featured at the end of Night II after a series of videos that seemed to be about creeping fatality, more or less).

Thus as proclaimed by the mixtapes, the films Billy Burgess likes to select exist at the intersection of commingling spheres of alternative realities, whether those realities stem from histories pagan, punk, cult cinema, horror, or even anti-communist.

Fortunately, it’s not quite over yet. The Druid Underground Film Festival will be continuing at Spectacle Theatre in Brooklyn May 28th for the long form shorts program. You still have a chance to watch Satanists and sex fiends release some of that workaday pent up frustration you’ve been emotionally snowballing.

Oh, and Billy Burgess gives away prizes. Though it’s unclear whether these would be the sorts of prizes you really want to win.