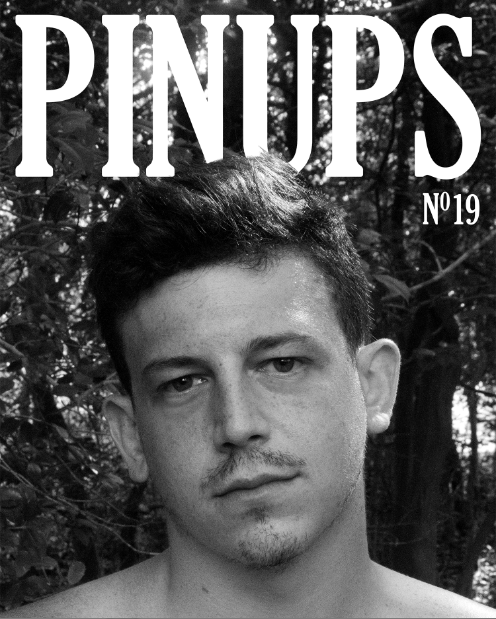 Towards the end of the summer I had the pleasure to sit and chat with Christopher Schulz at Gali in Soho. I’ve known Chris for some time now. We shared a pizza once watching Werner Herzog’s ‘Nosferatu The Vampyre’ at his place when we both lived in South Williamsburg circa 2008.

Chris is a fixture at the New York Art book fairs where you can find him exhibiting his queer zine ‘Pinups’. Each issue has the same unified parameter: a pictorial of a male nude shot digitally in black and white. His photos are printed, full bleed on paper in a staple bound zine. Every issue follows the same template: its dimension being 8 x 10 inches and 56 pages that, when dismembered and the loose pages tiled, reveal a single, monumental image of the subject. In Chris’s words:

The zine’s two states conflict, resulting in a visual and narrative abstraction: a dialogue between its physical structure and its printed content.

The tactile relationship one has with ‘Pinups’ is what makes reading it so satisfying. It’s not just the tastefully shot images of the handsome nude men or the effortless design of the periodical that make engaging with it so pleasurable. It’s also the delight one has pulling the zine apart and constructing it as a poster. Beyond its mechanics you begin to notice how well the ink sits on the pages. Your fingertips feel the weight and texture of the paper as you carefully dismantle it, all the while looking for clues in the abstracted images as to what you’re about to see. When these apparently disparate images are pieced together the scale of the subject shifts and details overlooked in the original format become wonderfully apparent: the way a patch of hair, for example growing on the small of ones back or a crease at the corner of ones mouth all begin to suggest a narrative the reader is inextricably linked with.

During our conversation Chris talked about an influential lecture Vanessa Beecroft gave when he was studying at the Chicago Institute of Art:

It was a very interesting talk. She was saying that using the nude body… is like creating a blank canvas. That conversation and that point really stuck with me… thinking about what it means to be taking portraits of people clothed or not clothed.

An assumption a casual reader flipping through Pinups makes is that it’s solely a zine featuring photographs of naked, bearish men. The bodies of these men are pedestrian. They’re not primped and exercised. They’re not an ideal male form made for any kind of visual consumption or appreciation, at least not in any mainstream commercial sense. In Chris’s mind the naked bodies are blank pages that readers of his periodical project upon.

Throughout our conversation Chris stressed how disinterested he is in the nude bodies he photographs as being overtly sexual. He wants us to think about the naked body beyond its being sensationalized:

“I’m more interested in things that are never discussed or not explored as much, those other layers are interesting to me. Earlier on I was like, no tattoos, no piercings, I wanted the photos to be inspired by early 50’s thru 70’s representations of nude portraiture. I wanted (my) images to reflect that particular time and not contemporary times. I didn’t want any signifiers. Now I don’t care. In the early to mid publication of the magazine I was more interested in stripping the image of any cultural signifiers.”

This shift in Chris’s concept of Pinups is most apparent in issue #17. Chris shoots Jake Dibeler posing in various accouterments like hoop earrings, pumps, and a wig. Jake is a performer that plays with gender and was the first subject Chris shot that had conditions. Chris embraced them wholeheartedly and describes this shoot as a breakthrough:

“That was the first time I focused on the subject and letting something personal come through that was larger than just a picture. When I asked Jake to be in the magazine he had conditions, which I knew he would. He felt that if his nude image was to be presented it had to be on his terms and so it became a dialogue between him and the viewer where he was throwing a wrench in expectations. We put some pieces on took some pieces off. He was always wearing something, at least one or two things. It provided a narrative to the piece that really came from whom he is that I felt carried through (in) the magazine. When that happened I thought Ok for the next issue I want to do something similar. I want to tap into something the subject does… something the subject was that provides a deeper layer.”

In the following issue #18, Chris shoots the artist Elijah Burgher painting one of his sigil paintings. A sigil is an inscribed or painted symbol considered to have magical power. There’s an interesting relationship between Elijah’s sigil paintings and the physical structure of Pinups. They both sublimate desire through the process of abstraction. That trace desire is at the root of both bodies of work however deeply buried beneath visual fetishistic processes. Chris invites us to enact this process by dismantling and reconstructing his zine while Elijah weaves letters and symbols that represent his desires through painting his sigils on canvas. What remains for us to see in both Pinups and Elijah’s sigil paintings are the mechanics of a spell and the mystery of the enchanter’s intention behind its being caste.