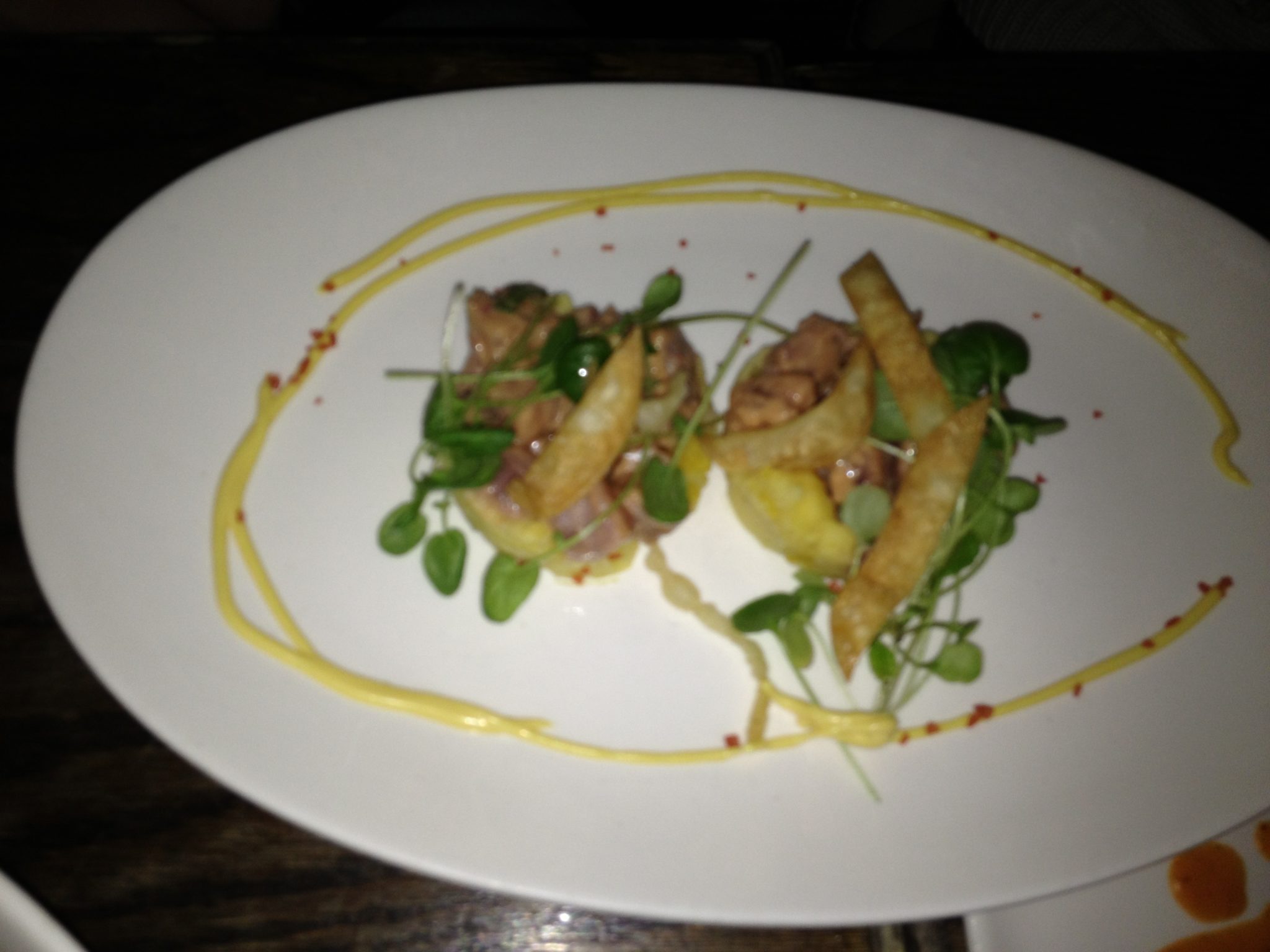 What can I say, I just was not impressed. Its really seamed like dad wasn’t home so all the kids were at play. With Chef Julian Medina’s name and reputation I expected the food to be much better than it was, at least when I ate at Yerba Buena.

The service was warm and always with a smile, despite the number of requests my table, unfortunately had to make. Only two menus for three people, only 2 knives, having the request dinner sized plates for dinner. Things like that. But, no matter the request or question every person there was warm eyed and kind. Even when I walked out of the bathroom with toilet paper stuck to my shoe, my server noticed and discretely asked me if he could remove it. (how embarrassing…but thank you!)

I did a full tasting of the NYC Restaurant week menu, with the help of two friends and across the board none of us were impressed by what came out of the kitchen. There was a close competition for the worst dish between the Lechon (suckling pig carnitas) and the Causa de Tuna, but the tuna won.

The menu explains the dish as tuna tartar, potato salad, , crispy wanton. The tuna, oh I feel bad for the tuna. It just treated so poorly, it was grey, tough and not properly chopped. The knife skills show here were only adequate for a child. The pieces were uneven, not always cut the whole way through the membranes and the pieces were just way too large to begin with. The “potato salad” was more of a mashed potato. Which is just not what I would ever want with my tuna tartar. I don’t know why it was even on the plate. All it did was take away from the really nice aji Amarillo sauce that was drizzled across the plate. This bright and vibrant South American yellow chili sauce with the watercress was the best part of the dish.

The best dish also a fish dish, Parihuela. Which was explained as “Seafood stew, shrimp, fluke, clams, mussels, ginger, Peruvian corn, roccotto.” Here the shrimp was cooked to perfection, but the muscles and clams were overcooked and chewy and the fluke provided a nice contrast in texture against the other fish and the corn. I found myself searching through the soup for more bits of the unique oversized Peruvian corn pieces. I had a lot of fun eating the dish. The broth was aromatic and strongly flavored with corn, ginger and rocket (popular Peruvian salsa base).

All and all I would try another restaurant of Chef Medina but I will most likely be calling a head to see if he is in the kitchen. I am really hoping that he was not in the kitchen the night I ate at Yerba Buena, but any way you slice it the food was below my expectations and I was disappointed.

One area that I was very happy the Yerba Buena with was the fact that the portions were not huge, and the food was not heavy. I was completely satisfied when it came to all of those aspects of the meal. It was not overly fatty or seamed to be heavy in any sort of butter. There was very little as far as creams and caloric rich foods, yes some of the sauces were not light on calories, but the portions used were great so that I felt as if I could enjoy the whole portion with out the guilt. Who does not love a really great sauce? We can and should all have some wiggle room in our diets for enjoying the scrumptious drizzling, but we should not be be dousing our whole plates in the sauces, thats an easy way to kill a diet.

All and all the restaurant was so close to being great, there were hints of it. For instance, the bar was great. The bartender there really knows how to mix a great concoction. And  I call some the drinks that with some love, because you didn’t have to know what you wanted to order, you could just tell him what you like, the flavors and liquor, and presto, a delicious unnamed drink will appear courtesy of the bartender.  There were so many hints of great, but they were all muted out by the disappointing aspects of the same bit of the evening.