The Chase: Tuesdays at 9 p.m. Eastern on GSN

It’s August, the time of year in which the metaphorical new show faucet slows to a trickle. One of the perks of this, however, is that I get to diverge from my regular new TV diet of sitcoms, dramas, and cheap reality shows and look into areas that I don’t necessarily get to give my full attention to. This is particularly evident this week, as this week I instead look in on the debut of some new British TV as well as tonight’s show, which also happens to be a show adapted from across the pond.

The Chase is adapted from the British game show of the same name. Teams of three contestants build a large cash pot by answering a series of rapid fire questions. The contestants then each put their share of the pot on the line against a trivia ringer referred to as “the Chaser” (in this case, Mark “The Beast” Labbett). From there it becomes a race against both time and the Chaser as the contestants look to protect their money as a team in the final chase, with failure to do so costing the team its’ bank.

Brooke Burns, of Dog Eat Dog fame emcees the proceedings with a surprisingly high amount of enthusiasm, something that’s fairly welcome in a world where many such hosts of recent vintage have seemed fairly wooden (Apolo Ohno and Dylan Lane are the worst offenders). Her reaction to some of the more ridiculous questions (most notably that asked: during the Vietnam War which country was headed by a Ho?) seem to allow for her personality to break through, adding a little spontaneity to the proceedings. Unfortunately, her chemistry with the Beast feels off, as her retorts to Labbett’s zingers feel a little forced.

The Beast seems to work as an affable villain, talking just the right level of smack to have you root for the contestants while being just likable enough that one doesn’t feel compelled to change the channel. He also clearly knows his stuff, as even his misses have a certain clear logic that seems familiar to anyone whom has ever taken a scan-tron style test in their lives. The first episode seems to imply that the Beast is his own oddsmaker, as he put much sharper odds on our third contestant, putting 20,000 more on the long path than against a prior contestant.

For those of you who prefer hard quizzers along the lines of Jeopardy!, this show doesn’t necessarily show the same degree of difficulty, but is still suitably difficult enough to play along with. Additionally, the game avoids the painfully slow pace of most of the post-Millionaire era contemporary quizzers (i’m looking at you Greed, and Deal or No Deal) instead moving at a much more rapid clip. Unfortunately, the contestant pool in our first episode seems woefully unaware of contemporary pop culture, missing obvious questions about such fairly well known shows as Breaking Bad, and equally well known musicians such as Katy Perry.

One minor gripe that I can’t get let go of are the buzzer noises in the final chase. Would it really have killed the producers to just let the contestants verbally jump in as opposed to the obnoxious announcer voice announcing the name of the contestant buzzing in?

The Final Verdict: The game show junkie in me couldn’t be happier that this show is on the air. In a TV environment where the only real game shows on TV (or for that matter most of GSN’s original lineup) are either long runners (The Price is Right), rehashes of older shows (Let’s Make A Deal, The Newlywed Game), or shows destined to fail (Take It All), The Chase is a breath of fresh air. It’s always a good sign when a show is renewed prior to it’s debut, and the first couple episodes of The Chase seem to justify this call. Check it out if you’re looking for something to watch, you won’t be disappointed. 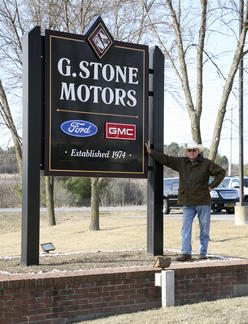 Am I the only one who remembers when GSN only showed game shows? Probably, but in the last half decade or so they’ve expanded their reach, whether it’s trying to capitalize on the poker boom in the mid-00’s (High Stakes Poker, and World Series of Blackjack), competition shows (reruns of Dancing with the Stars), and whatever you would call Kenny vs. Spenny.

Their biggest stretch from the original format of the network has been their new found obsession of grafting “reality” programming into their scheduling. Tonight marks the debut of GSN’s newest offering to the genre: Family Trade. Family Trade depicts the life of a family whom owns an automobile dealership in Vermont. The key twist, however, is family patriarch Gardner Stone’s guarantee that he will accept anything in trade that he thinks he can sell in exchange for a BRAND NEW CAR! (Sorry, I just couldn’t resist the urge there.) His children, Todd and Darcy, question this strategy at every turn while having the difficult task of moving the objects that their father just bartered away a car for.

So how does this mash-up of Let’s Make a Deal and Pawn Stars fare? Well for starters, the stakes don’t seem that high. In both instances, the barters only covered a portion of the down payment, which takes all of the stakes out of the game (one barter for Maple Syrup involved $2,500 in Maple Syrup, however the cost of the truck in question was over $50,000). Furthermore, there seems to be an absolute minimum of substantial conflict as Gardner always wins these disputes (one employee flat out states it).

The show was also advertised as having a focus on family drama, yet Family Trade comes out lacking there as well. In the first two episodes, there was a dearth of conflict or even raised voices. This becomes particularly glaring as the show relies on filler shots, a tension chord, and straddling deals over commercial breaks to create a seemingly false sense of tension.

This lack of drama would suffice if there were other reasons to emotionally invest in the Stone family. Unfortunately, Family Trade limits each of it’s primary characters to a cardboard cut out. We only learn about Gardner that’s he bull headed and he’ll trade for and with anything as long as he comes out ahead. Similarly we learn that Todd is skeptical of the barter business and that he thinks Gardner is nuts for taking the deals he has but that’s it. Darcy and Travis, the two other employees of G-Stone motors who get remotely regular screen time tend to come off as faceless entities.

When the focus changes to Todd and Darcy dealing with the ramifications of Gardner’s decisions, the show gets considerably more interesting. This is particularly notable when Gardner and Darcy can’t bring themselves to sell the pigs they bought from a customer looking for a trailer at a farmer’s auction. Darcy’s imploring Gardner to find a more humane end for the pigs while Todd is bewildered at why they took the trade to begin with. Similarly, when Gardner sells maple syrup in barter to win a selling contest for the leftover maple syrup with Todd, the two squabble because Gardner made a “profit” in credit from the restaurants while Todd took a loss but picked up actual cash.

The Final Verdict: Family Trade is incredibly bland. Whereas many shows in the reality genre focus on hair-pulling or seemingly life and death choices, Trade is hyped to be a big deal but ultimately focuses on life’s little problems and a quirky dealership. The show probably would have worked better if they spent less time trying to punch it up in the drama department and instead focused on taking a more slice of life perspective and divulging a little more on its’ key stars than the two dimensional caricatures we get. Skip it, Tuesday’s one of the stronger nights on the dial and once you’ve seen one episode you’ll feel like you’ve seen all of them.