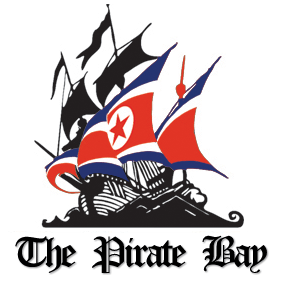 The Pirate Bay has moved to North Korea.  Moments ago history was made.  Hollywood succeeded in blowing another crushing defeat to The Pirate Bay  by disconnecting their stronghold in Norway.  The Norwegian hosting provider that was supplying bandwidth to The Pirate Bay was forced to discontinue service.  To the uniformed, The Pirate Bay is a website that skirts all international law on sharing data, copyrighted or not.  With a colorful history and millions of users The Pirate Bay is often forced to find new hosting partners.

Visitors today may notice the site is running slower than usual.  This is a result of The Pirate Bay finding a new hosting partner in North Korea.  Surely this will have geopolitical repercussions as North Korea is well known for their human rights violations.  North Korean prison camp survivors have likend their experiences to that of  those who endured World  War II concentration camps.

This strange and desperate move by The Pirate Bay that seems to highlight how effective Hollywood has been at dismantling a global network that once hosted The Pirate Bay.  The move also demonstrates how out of touch the International community has become with the desires of the citizens they are supposed to represent.  Many would liken The Pirate Bay to a global Library, an Information powerhouse, and the greatest knowledge sharing system ever devised.

Whatever the end result for The Pirate Bay this is a sad day for freedom loving people everywhere, when one of the most repressive governments in history is the last refuge for one of the most open and liberating websites in history.