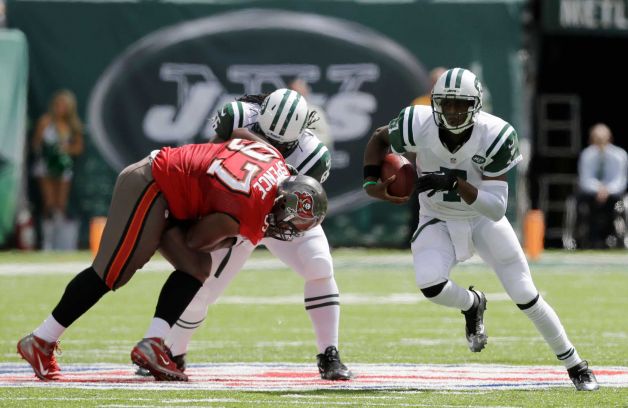 What would the kid do? Personally I looked at my roommate Dean and said, “Do you know what time it is?” He replied “No” I than proclaimed  “It’s Geno Time”. With just over a half minute to play in the final quarter Sunday Geno Smith ran the Jets offense out there like a seasoned veteran.

“I just went out there,” Smith said, “and told those guys it’s never over.”

Down by 2 (17-15), the before mentioned Smith would drop back to pass but to find nothing to his liking. In his best Steve Young impersonation he would scramble for a gain of 10 while being shoved out of bounds by Bucacaneers Lavonte David, which is an additional 15-yard penalty. Once the player dedicates himself to leaving the playing surface anyone who tackles such player is subject to a 15-yard personal foul penalty. The additional infraction would put kicker Nick Folk in his range where he would come on to win the contest with :07 left. Folk’s kick would register 48 yards.

“Man, oh man,” head coach Rex Ryan mentioned after the game.”We talk about a resilient group, and we certainly have it. We fought all the way to the end. One team, one fight, well, there it is.

The Jets were elated once the kick went through the field goal post as they all jumped up and down on the field and in addition to the sideline. A similar scene to the Buccaneers moments earlier when kicker Rian Lindell booted a 37-yard field goal with 34 seconds left. Smith who is starting in place of QB Mark Sanchez who is out with a torn labrum said “If there’s time on the clock, I expect us to go out there and execute, And that’s what we did today.”

Prior to the contest The Jets announced that Sanchez would be receiving a second opinion by Dr. James Andrews sometime this week, in addition the NFL announced before the game that Grammy-winner Bruno Mars will perform at halftime of the Super Bowl at MetLife Stadium (NY/NJ) on Feb. 2.

It took numerous attempts but the Dallas Cowboys finally defeated the New York Giants in their shiny 1.2 billion dollar stadium, New York was previously (4-0). Tony Romo who seemed not to be fazed by an apparent rib injury which took him out of the game late in the first half came back strong delivering two touchdown passes to his favorite target, Jason Witten. Eli Manning of the Giants would do his best to counter punch by throwing four touchdowns of his own including three passes to Victor Cruz. Surprisingly despite 6 Giants turnovers, New York some how was still in position for a comeback victory.

“It’s infectious. It’s contagious,” Cowboys head coach Jason Garrett said. “We challenged them at halftime. We had three, let’s get three more.” Garrett a former Giants QB was referring to turnovers, something that new defensive coordinator Monte Kiffin has seemed to improve in the offseason. DeMarcus Ware intercepted Manning’s first pass of the game, and the Giants turned it over on their first three possessions.

In the loss the Giants lost starting cornerback Prince Amukamara to a concussion. He is questionable for Sunday’s game vs. Manning’s older brother Peyton and the Broncos at 4:15. 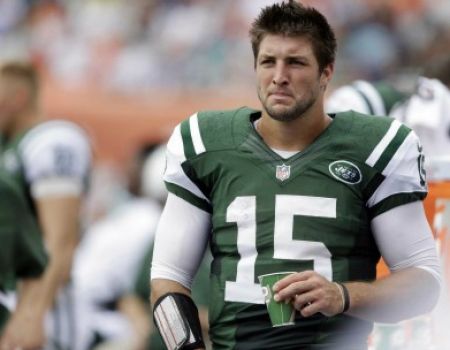 NEW YORK CITY, NEW YORK; Highly touted former West Virginia quarterback Geno Smith had one of the biggest fall’s in recent NFL draft history. There was Aaron Rodgers and Brady Quinn, both potential top 10 guys who fell to much later in the round but Smith was different. Geno was projected to be a top 10 pick like the previous 2 players, but unlike them he wasn’t selected on day one. Geno Smith was among about 12 college players who had accepted an invitation to attend the draft. Invited players are placed back stage in the green room at Radio City Music Hall where he would stay for most of the first-round. He would often be seen on the table landline phone, or even his cell phone potentially talking to suitors. I have inside information that has stated that his table # was leaked and people pranking his table was the cause of his angst. When the first-round reached the final few picks, and with those picks being held by teams that have no need for a quarterback, Smith would leave the building as it was evident he would not be selected until Day 2.

It had originally been reported that Smith was not going to attend Day 2 of the draft, but last second the star QB decided to change his mind and give it another go. He returned to Radio City Music Hall on Friday and would wait for his name to be called. He would only wait 8 selections as the New York Jets decided to select him 39th overall. Must be nice to be drafted by an NFL team right? Of course it is but his projected contract should be in the range of just under $5 million with over $3.1 million in guaranteed money. If Geno Smith had been selected in Round 1, his contract would be worth, at minimum, $6.7 million with around $5.4 million in guaranteed money. Huge pay difference, but who is to blame? For starters Smith thinks it’s his agent and he has fired him barely a weekend since the draft concluded.

The financial difference, as well as having to return to a green room for a second day, appear to be the reason why Smith is changing agents.

With Geno being introduced to the nation as the newest Jets QB in Florham Park,NJ on Saturday that left a bit of log jam at that position for the team. On the roster currently they had 6 Quarterbacks, but that has changed as the Jets decided to cut former Heisman trophy winner and 1st round pick Tim Tebow, and all the baggage that came along with him. With Mark Sanchez’s huge contract the move was to release Tebow, as Mark seems to be stuck for atleast one more season. But another question has been asked. Why did the Jets even want this guy?

All of which would make sense if Tebow came pulling an arrest record or showed up late for meetings or cost the Jets the playoffs with a bad interception. Instead, the disdain with which the Jets threw him out the door after barely using him in a waste of a season – he appeared in just 77 offensive plays – raises a bigger question that speaks to the chaos of a franchise that never gets it:

Why did the Jets want Tim Tebow in the first place?

This organization who has been known for its dysfunction were the ones who initiated and pursued Tebow last spring, pushing extremely hard to get him, and their was nothing the fans could do. They would watch the courtship occur and wonder why their team would want and under skilled QB who brings a lot so much more than just football, but a media circus. If it’s not questions about his religion, its about him being a virgin, or his family or other beliefs. If you think about it Tebow is a handsome, religious football player without a rap sheet. He seems to be the perfect role model!

They would find themselves in an unusual bidding war with his hometown Jacksonville Jaguars, eventually trading a fourth-round pick to get him 13 months ago. They would convince Tim and his family (which means everything to him) that they were the best fit for him and his career. They even leaked that they had a plan and a formation that would be dedicated to him. He would sometimes play QB, with a little receiver, maybe some running back and occasionally block. That doesn’t seem like much of a plan, but rather a lot of, yup dysfunction. They wanted Tim to be  similar to what they had with former Mizzou QB Brad Smith and something they missed after he departed to division rival Buffalo before the 2011 season.

Instead of putting Tim in a position he can succeed or even keep their promise, they told him a fib and a lie to the disdain of Jets who threw him out the door after barely using him “in a waste of a season – he appeared in just 77 offensive plays – raises a bigger question that speaks to the chaos of a franchise that never gets it”. (yahoo sports)

Rex Ryan and the Jets failed Tim Tebow, he was told and preached one thing and was lied to. Now with the draft over and OTAs, and conditioning camps starting rosters are filled. It will be hard for ole’ Tim to find an NFL job now but, Don’t count him out.