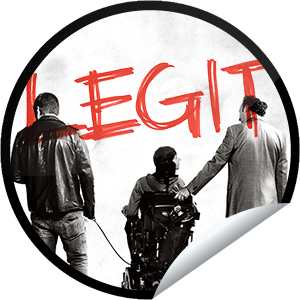 Over the last few years, one of FX’s strongest suits has been the lowbrow comedy about flawed people, whether it be the remorseless gang of It’s Always Sunny in Philadelphia, the maladjusted spies at ISIS in Archer, or the failed lawyer who gets high with a dog in Wilfred. Their new series Legit is a perfect fit in this mold.

Legit follows Jim Jefferies (in his stand-up persona), a stand-up comedian who is known for immaturity and for generally being an all around jerk as he tries to become more “legit” in the eyes of his mother. He is aided in his task by his best friend Steve (Dan Bakkedahl –the name may be unfamiliar, but he has had guest runs on shows ranging from Community to Veep to 30 Rock) whom has a considerably straighter moral compass than Jim and recommends that Jim do good things for people as a way to become “legit”.

When Jeffries’ gets a call from Steve’s younger brother Billy (who has muscular dystrophy and is confined to a wheelchair), the show’s plot wheels begin to turn in motion. Billy’s major concern in life at the start of the show is that he has yet to have sex and begs Jeff to take him to a hooker. This leads to a debauchery laden road trip that sets the overall tone for the series (and leads to the events of the next episode).

The second episode, “Dreams” picks up where the first one left off, with Jim and Steve off to break Billy out of his rest home but being saddled with his roommate, a developmentally disabled dwarf named Rodney (who drives a hard bargain and is really good at Wii Bowling) for a night of hard partying that leads to, Billy’s eviction and the return of Steve’s overbearing mother (and the clear fore-runner for Jim’s sitcom nemesis) Janice (played by Mindy Sterling) who insists on being the caretaker for Billy now that he can no longer be in the rest home.

The show as a whole is fearlessly raunchy, with two large benders in the first two episodes (in the form of the road trip in the pilot and a party off-screen in episode two), and features a very take-no-prisoners approach to its’ humor (if you’re not comfortable about a man in a wheelchair tripping out and being surprised at the notion that “he can’t feel his legs” this show is not going to be for you and you probably should disregard this review).

Where this show truly succeeds is in those heartwarming moments where Jim suddenly becomes a little less self-centered, be it when he hands a homeless man a five for listening to him ramble on about how dreams and goals make him miserable, trying to talk Billy out of killing himself after being forced to move in with his mother, or his genuine joy when Rodney gets a perfect game on Wii Bowling (even if the latter occurred while Steve was bugging out about returning Billy and Rodney to the rest home).

The Final Verdict: Legit clicks with me. It’s honest, it’s funny, it’s a little dark at times, but it fits perfectly into  FX’s 10:00 PM Thursday comedy hour that has been home to some of the funniest comedy on television (and Unsupervised) over the past three years. It’s particularly strong at reaching both the most cringe-worthy of lows, and yet still succeeds in creating heartwarming moments. This will likely be part of my regular viewing (it’s lead in Archer has been for me since day one) and I look forward to how this twisted redemption tale plays out.