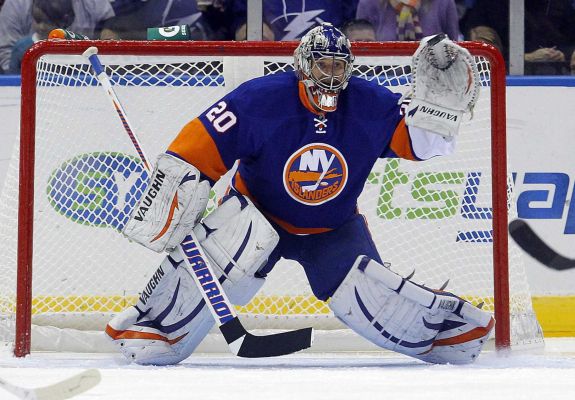 There are two professional sports traditions in the New York Metro area every Martin Luther King day. Every MLK day both the New York Islanders and the New York Knicks host matinees as most people are off from work while all are off from school to honor the American Icon. This year it was no different as the Islanders hosted the Tampa Bay Lightning and the Knickerbockers entertained the Brooklyn Nets.

First to the ice.

UNIONDALE, N.Y. David Ullstrom scored early in the third period which would give Islanders a dominant four goal lead, but I will divert to the ole’ adage “it aint over till the fat lady sings”. Tampa Bay would score the next 3 and would

cool off the young crowd at the coliseum. Luckily for their fans the Isles would escape with a narrow victory as mental mistakes and errors, which would lead to crucial penalties, would mar the final few minutes.

Jack Capuano the coach of the Islanders would take part in his first game of the season as he missed Saturday’s opening night as he was hospitalized due to surgery to remove a kidney stone. Michael Grabner, Matt Martin and Kyle Okposo would also light the lamp in addition to Ullstrom. For the Lightning Martin St.Louis, Benoit Pouliot and 2012 NHL scoring leader Steven Stamkos would tally in the loss. Both Teams are 1-1 with 2 points. The Islanders next contest will be Thursday as they head north of the border for a conference matchup vs Toronto.

The afternoon finale on the Hardwood.

The suddenly mediocre New York Knicks hosted the upstart Brooklyn Nets. The Knicks have play once in a week as they traveled across the Atlantic for a game verse Detroit this past Thursday. The Knicks would come into MLK day dropping their previous two MLK contests. Would traveling and jet lag fatigue be a factor?

NEW YORK, NEW YORK: Former All star Joe Johnson made a go-ahead shot with 22 seconds left as his 25 points would lead the Black & White from Brooklyn to a 88-85 over there rivals from Manhattan. In the first year of the Brooklyn Nets they would split the 4 game regular season series. The Knicks who came into the day with a two game division lead had it cut 1 as suddenly they are reeling on their home floor.

Three Nets players would register double doubles including Kris Humphries who was a spark plug off the bench. Carmelo Anthony for the Knicks would drain 29 points but would come up short in the fourth quarter shooting 0-6 from the field. Melo looked tired and drained as his baseline attempt in the final minute looked deflated. Melo would gain separation from the defender and come up with a great look from 12 feet, but looked lethargic in the actual execution. The Knicks are 4-6 in their last ten while Brooklyn is 9-1. It doesn’t get much easier for NYK as they will head to Boston Thursday for a 8pm contest vs the Celtics. Brooklyn is 12-2 since PJ Carlesimo took over as head coach December 27th.

Amare Stoudemire (Damaged Knee Tissue Debridement Surgery) would play 27 minutes which is the most he has since complaining of knee soreness on January 7th. This was Amare’s 8th contest of the season; in those he has averaged 10.4 PPG while averaging 20.8 minutes.

Iman Shumpert (Torn ACL & Meniscus) scored 2 points and played 20 minutes, which is his limit per game to start. As his season progresses he is expected to extend those minutes based on a timetable and overall comfort. Shumpert’s defense which is his staple is almost on point, which shooting and timing will get better with more playing time.

NEW YORK, NEW YORK – With this lockout shortened 48 game season has commenced every day is double as important. The Pittsburgh Penguins have four points and lead the Atlantic Division. On the Flipside the Vegas favorite New York Rangers and Philadelphia Flyers have zero. With the season being so short, it is never to early to look a head to the post season. When Pascal Dupuis tallied the Penguins fourth goal of the game just 29 minutes into the contest it would chase the reigning Vezina Trophy winner Henrik Lunqvist in favor of back up Martin Biron. All en route to a 6-3 Penguins victory. “Personally, it was a tough night,” Lundqvist said. “I don’t really have a good explanation. I just have to keep working hard and try to get better. “I understand the decision. It’s a game where right from the get-go, it felt like the puck was really bouncing my way.”

“I don’t think we’re pushing panic buttons,” said new Rangers addition Rick Nash. “It’s not the start we wanted. We’ve got to get back to work. There are a lot of mistakes out there we have to correct. It’s a short season, so we’ve got to correct them fast.”