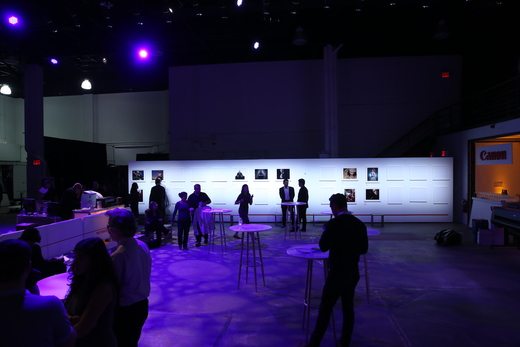 A glorified PR event to showcase a camera company’s new printers has never been so much fun—which is of course unfair for me to say, having never attended one before.  In favor of Canon’s “Behind the Print: A Look Inside a Photographer’s Obsession,” which took place on the evening of Wednesday, October 21st, there was plenty of opportunity for photography enthusiasts to get involved in the action. Several impressive sets for shooting were assembled across the venue, ready for use by renowned photographers, guests, and a host of models.

The renowned photographers, Joel Grimes, Lindsay Adler, and David Bergman, sat one to a set as guests arrived, shooting models while surrounded by several assistants each. Each of these photographers has attained a level of editorial and commercial success that’s put them in publications you’ve heard of, like Rolling Stone (Bergman) and Essence (Adler), and paired them with clients whose products you’ve used, like Red Bull and the US Postal Service (Grimes). Their work shares a common focus on portraits, capturing humans at close range, whether they’re modeling designer outfits or showcasing rippling muscles.

As these portrait-focused photographers snapped pictures, Canon employees printed out their best shots on the evening’s main attraction, Canon’s new series of professional, large format printers. These photos went on to fill a “work-in-progress gallery.” In other words, white picture frames that stood empty on one wall of the venue at the start of evening became filled, as the photographers worked away, with highly accomplished, commercial-looking shots by the evening’s end.

The event’s whole design cleverly showcased the printers, making them an integral part of the interactive experience and, simultaneously, the means to a cherish-able souvenir for the select guests allowed to use one the company’s newer cameras while directing and shooting models of their choice. These guests, identified in advance as photographers by the event’s organizers, also had available to them a costume and props station from which they could pick how to adorn the models they’d shoot. Models ranged from a veritable contortionist who looked great with the provided balloon animals to a clean-cut woman in a volleyball player’s getup, jumping to spike balls as Joel Grimes took pictures.

As the last “photographer” of the evening scheduled to make use of the sets, I (I’m no photographer) ended up in the one Lindsay Adler had been using. It offered a striking, red background and perfect lighting. Having never had to direct a model during a photo shoot before, I started off feebly—“Uhh, look down, and, uh, raise your arms above your head?” I graduated to more secure directions that resulted, actually, in worse pictures. “Pretend you’re on a family vacation that you really don’t want to be on.”

Thanks to the professional grade set with a professional model (and Canon’s new printers, surely), I ended up walking away with a great looking picture, one I could show my friends with ample pride. “Look, Mom, look what I made at this Canon event!” As I waited for the photo to print, an actual photographer stood by my side, waiting on a print from Lindsay Adler that he could take home.

“Isn’t she great?” he remarked as my photo came through. “Yeah, the model is gorgeous,” I replied, confused. “No, Lindsay Adler,” he said, thinking my picture had been taken by the well-known beauty photographer. I explained his mistake. “I guess with the right lighting and a whole professional team, anyone can take a great photo.” I agreed. Still, it was an ego boost, one smartly designed by Canon’s PR team.

After the “interactive” part of the event, when the hor d’oeurves switched from tiny sliders to remarkably dry cupcakes, the renowned photographers sat on an elevated platform for a panel discussion on how “obsession,” the theme of the event, ties into their art. “Three inches makes or breaks the shot, so I obsess over that,” said Grimes. Adler, who spoke of “juggling so many things” when shooting earlier in the evening, from shadows to the model’s dress falling the right way, described “obsessing over everything.”

Ultimately, I obsessed a bit more over the dryness of the cupcakes than I did the outcome of my photo shoot, but I was still kind of obsessed with the photo I got to take home with me. Even with my hesitant direction and lack of experience, the set, the model, and the equipment did a lot of solid work on my behalf. So, thanks, Canon. Your professional, large format printer helped me fill out my own “work-in-progress gallery,” my living room wall.