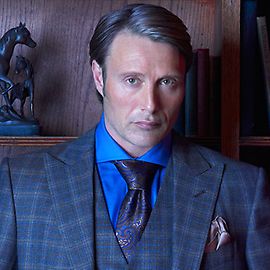 In a year where killers are in mid-season vogue (Cult, The Following, Bates Motel), it would only make sense that one network would take on one of the silver screen’s most genial killers of all time: Hannibal Lecter. This has potential to be a huge risk, however, as Anthony Hopkins’ turn as Lecter in Silence of the Lambs remains one of the most iconic performances in cinema history. Add in the fact that NBC’s last 10pm Thursday offering remains one of the most abysmal offerings of a show this season (Do Not Harm) and we suddenly see one of the most high-risk, high-reward scenarios in a time slot that has held some very lauded offerings (Hill Street Blues, L.A. Law, ER).

Hannibal follows a much younger Lecter than we are used to as the show takes us back to the origins of Lecter as a killer. When criminal profiler Will Graham (Hugh Dancy) consults Lecter (Mads Mikkelsen) in order to track down a criminal whose head he can’t get into, it looks like the beginning of a beautiful partnership. They are surrounded by a veteran cast including Lawrence Fishburne as Dr. Jack Crawford, whom doesn’t always agree with Graham’s methods.

The premiere has Crawford going to Graham to chase down a serial killer whom murdered eight girls in the Minnesota area. When they struggle with the forensic details and Graham cannot get into this killer’s head (despite his pure empathy), Crawford recruits Lecter in order to get in the head of a cannibal (any guesses who this cannibal might be?). However, Graham views Lecter with suspicion due to the issues between himself and Crawford, while Lecter uses subterfuge to try and break Graham.

The first thing I noticed, and I think many people will notice, is how visually impressive the show looks. It has the best set of blood effects I’ve seen on a show this ilk, and the cinematography of both Will’s murder replays and his dream sequences never fail to impress. The show has a very cinematic feel to it in general, especially in terms of the camera work even in it’s more subtle instances, such as the dark silhouette-like introduction to our titular character.

In addition to the visual beauty of the show, the show is well acted. Hugh Dancy’s Will Graham perfectly displays the sort of anti-social (and tortured) personality that they have written for him without being excessively hammy. Mikkelsen’s Hannibal is friendly, a touch stern, and far enough removed from Hopkins’ portrayal that over time I could see one becoming comfortable with it as an alternative approach to the character, while portraying Lecter’s love of mind games and foreshadowing the monster to come. For me however, the biggest surprise was watching Scott Thompson (of Kids in the Hall fame) playing an understated and astute forensic pathologist.

The writing also feels tight in a number of ways. First and foremost, it was not afraid to take its’ time bringing Hannibal into the party, instead focusing the first half hour on Will Hughes, whom in and of himself is a gripping protagonist. Similarly, I appreciated that the writing showed small flashes of the cannibalistic killer we all know and love, including the standard issue Hannibal lectures, the emphasis on politeness, and the overall mastermind aspect we’ve come to expect from the character. The ending felt a little rushed to compensate for taking the time, but considering the way the episode resolved itself (I try to avoid spoilers wherever possible), it makes perfect sense in hindsight.

The Final Verdict: Hannibal just clicks. The show is visually vibrant, its’ characters are incredibly deep, and the show is not afraid to put spanners in the works to keep its’ characters from succeeding (for me one of the worst things about the forensic drama genre is when it becomes incredibly obvious that the criminal will always end up in cuffs at 55 past the hour). The show seems compelling as Hannibal will continue to find new ways to break Will, Will tries to shrug off Hannibal, and Crawford will be completely confused by both of them. My recommendation? Watch it.