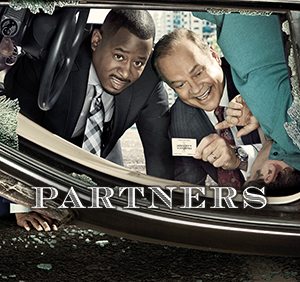 Partners: Mondays at 9 Eastern on FX

FX has made a number of bold and interesting moves over the past few years – they focused on expanding their comedy division and had strong successes with Louie, Archer, and The League. Two years later, they laid the groundwork for a split into three networks: the FX we all know and love, comedy-centric FXX, and the movie channel FXM. Lately, the network has been an aggressive participant in the event series trend, with limited run series like the various seasons of American Horror Story and Fargo. However, they pay for all of these gambles from a trick they learned on one of their least critically acclaimed shows in the form of Anger Management, where they started using a 10 episode first season and 90 episode second season model to bring in top name stars for their newer shows, like they do with Monday’s new debut Partners.

Partners stars Kelsey Grammar and Martin Lawrence as two attorneys who start a legal partnership at their respective nadirs. Grammar’s character, Alan Braddock, is a hotshot attorney who just got fired from the family business and is making money doing some horrifically unethical legal work. Lawrence’s character, Marcus Jackson, on the other hand, is battling a divorce and has much of his work being performed pro-bono for baked goods. When the court forces the two to work together, they form a partnership in an attempt to be profitable and ethical something neither has completely grasped.

Partners is ultimately a mess. It’s pilot is an origin story that feels thrown together, with it’s points being held together with the absolute minimum of internal logic. The end result, is a story that feels not only rushed, but nonsensical at points due to the wild jumps of logic that the show makes. Furthermore, this show about lawyers seems to take a long detour into Braddock and Jackson being private investigators (while their assistants do seemingly nothing) at least once during every episode. Add in some tacked on family subplots by giving Braddock an unnecessary daughter and you have an incoherent plot soup.

Worse than that, much of Partners feels incredibly tired. Many of the the jokes feel like a raunchier version of something out of a 90’s sitcom (which is no surprise when you consider the showrunner is Robert Boyett whose mostly known for ABC’s TGIF block). This tiredness extends out to much of the line delivery, which for Lawrence especially feels flat and uninspired, as if it’s clear he took the script for the paycheck.

The one bright spot on the show is Grammar-himself, who keeps the same Grammar-esque pomposity and tone adds a little bit of the levity to the shows delivery. While normally I’m not a fan of someone hamming up on a sitcom, here it’s necessary if only to breathe life into the otherwise dull proceedings. Unfortunately, however, even that one bright spot is but a tiny shrub in the path of the awful tornado that Partners ultimately is.

The Final Verdict: The latest 10-90 experiment by FX, I would be surprised if Partners makes a second season. It mixes tired jokes, incoherent plotting, and mostly uninspired acting into what feels like an interminable 22 minutes. Skip this one, FX doesn’t misfire often, but Partners is a complete dud.