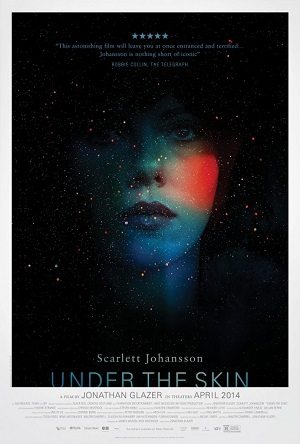 Some might say we live in a day and age when works of genre are gaining more recognition and artistic respect than ever before. Game of Thrones has practically legitimized high fantasy for audiences of serious drama, vampire films like Let the Right One In and The Only Lovers Left Alive have given art house takes on the well-worn genre, and Animation Studio Pixar proved to put out some of the most lauded films of the last decade (animated or otherwise) at a highly consistent rate. Still, I feel that people that say this belittle the fact that there have always been pieces of genre that have blurred the line between fantasy and surrealism, with many sci-fi works of the post-war era proving to be pivotal for international pop-culture. Robert Heinlein’s sci-fi novel Stranger in a Strangeland is often attributed to starting the hippie movement, and Stanley Kubrick’s 2001: A Space Odyssey has become one of the most revered films in history. I’d even say that it seems rudimentary at this point that every generation gets at least one sci-fi film that truly tries to come off as artistically expressive and daringly unique, whether it be the 1970s (The Man Who Fell to Earth, Stalker), 80s (Alien, Blade Runner), or more recent years (Children of Men). Now, while it’s not certain that Under the Skin will receive such a label, but it’s inherence to this pattern is viable, and it’s also the first sci-fi film to really feel atmospheric in a very long time.

In Under the Skin’s vague yet linear plot, we follow an alien that takes on the form of a beautiful female human (Scarlett Johanson). Driving a van around the countryside and cities of Scotland, we see this creature attract horny men into coming back to her abode, only to be lured into a trap, and then destroyed for some unknown reason. However, the alien eventually seems to grow an interest in examining these people, and even a bit of sympathy, and she then abandons her original objective to see if she can find a true place in this strange, dangerous, yet still beautiful world.

A great deal of anticipation has settled around this film since it’s announcement, for the chief reason that this is British director Jonathan Glazer’s first film in almost ten years. Glazer has been known for nearly two decades now for his work directing stunning music videos and television commercials, but his first feature Sexy Beast proved to be a success with critics, and while his second feature Birth wasn’t nearly as lauded, it has since developed a loyal cult following. Still, neither of those films quite matched the viscera of Glazer’s shorter pieces, and it’s comprehendible that Glazer’s long directorial hiatus was because he was waiting to get his next project just right. Not only did he find the ideal script for his sensibilities (which he co-wrote with Nick Wechsler), but he made a film more rich in film theory than any of us might have expected. 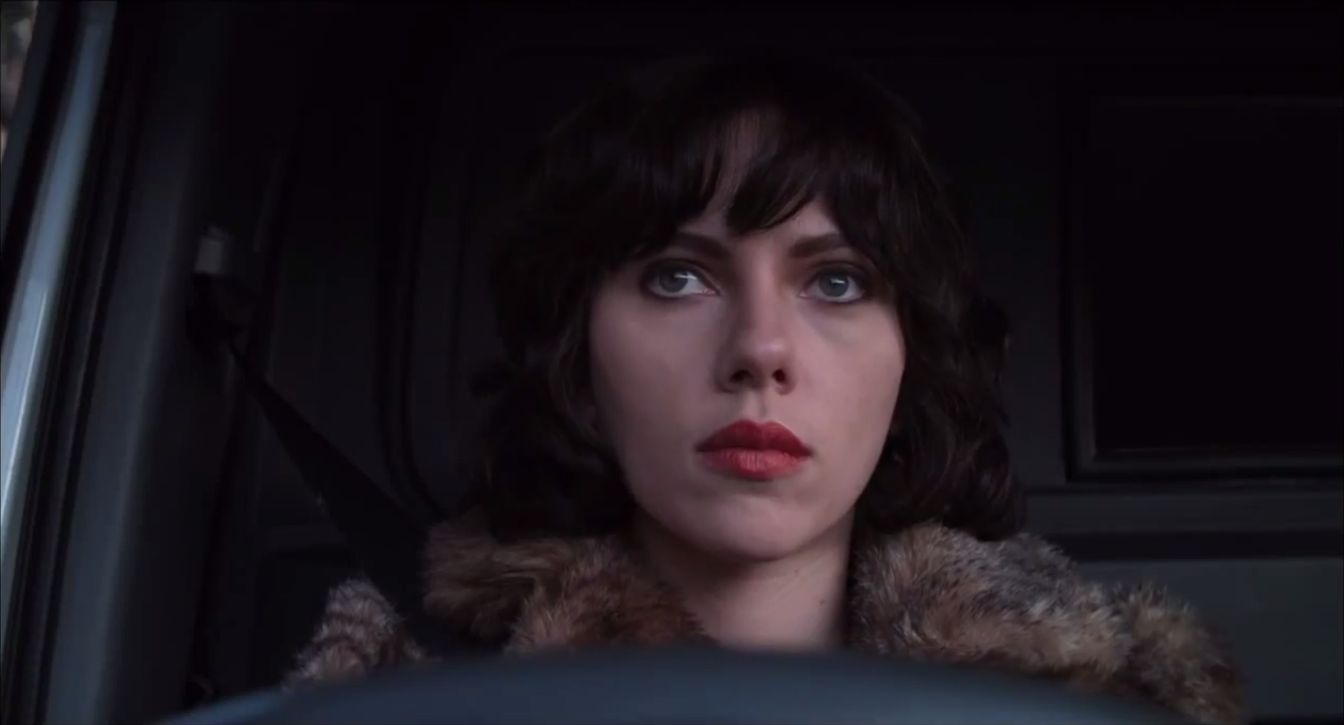 Under the Skin is centrally a mood piece, as right from the beginning Glazer seems to be telling viewers that they’re in for a slow burn, but a fully entrancing one too. The film begins with an extended sequence of alien technology meshing together, all while we hear the word “film” repeated over and over, finally concluding with the technology forming a circle and then transforming into the image of an eye. The film has several other elongated sequences like this opener too, including a scene where Johansson’s alien views the daily activities of humans, with the shots eventually being bathed in a cascade of neon orange, as well as a death sequence (or two) that is equal parts beautiful and intense. The film’s narrative is also delivered in a way that’s more concerned with tone and imagery than storyline, and it carries an aesthetic that feels both expressive, yet also artificial (look at the typeface on the poster to get a good idea of what I mean). Enlisting the talents of cinematographer Daniel Landlin, and musician Mica Levi (front woman for English band Michachu and the Shapes), Glazer has giving his film an immersive sense of spectacle that is unnerving, and haunting, even when the storyline is at its most impenetrable.

It can be a difficult film to fully understand, as dialogue is minimal (and often hard to make out due to the heavy Scottish accents), character motivations are never explicated on, and it’s never revealed why our alien has come to planet Earth. Jonathan Glazer even admits that he wasn’t too concerned with any allegory the film might pose, and was mainly shooting things as they felt came naturally to him. Still, much can be read about the film’s inner meaning through Scarlett Johanson’s performance.

The 29-year old actress may have started out in indie films like Ghost World and Lost in Translation, but for the past few years she’s mainly been known for her role as Black Widow in the Marvel Movie Universe and topping magazine lists for the world’s most attractive/beautiful/hottest actress. In Under the Skin though, Johansson uses more than just her sex appeal, to convince us that she is a predator on men. Some of the conversations we see her have were actually not shot with actors, and instead Glazer used hidden cameras to capture improvised conversations Johansson had with unknowing citizens. An experimental method, but also one that mostly works, as the film’s most efficient moments are when the alien is observing our reality, witnessing ugliness alongside beauty. The second half of the film actually sees our alien revert from predator into prey, with Johansson giving her role a much wider range of feeling, as she attempts to understand her surroundings, as well as fall victim to her curiosity. The film’s strongest case for justification, is its theme of sexual predation, and it’s unsettling when one considers that this creature sees the most efficient means to obtain what she wants is by relying on the fact that men are primal in their desire to have sex with women.

At it’s best Under the Skin is a haunting sci-fi film that’s closer to the works of Rainer Werner Fassbinder or Michelangelo Antonioni, rather than James Cameron or Ridley Scott. At it’s weakest, Under the Skin is an interesting art house take on the alien-killer genre, that’s a mite bit unfocused, and emotionally vacant. Still, Glazer has made a film that feels unlike anything else, and it’s evident that only he could have made it such. Hopefully Glazer’s next project won’t take 9 years to form, but let’s hope that he carries on knowing that Under the Skin’s strongest aspects are the marks of his auteurism. 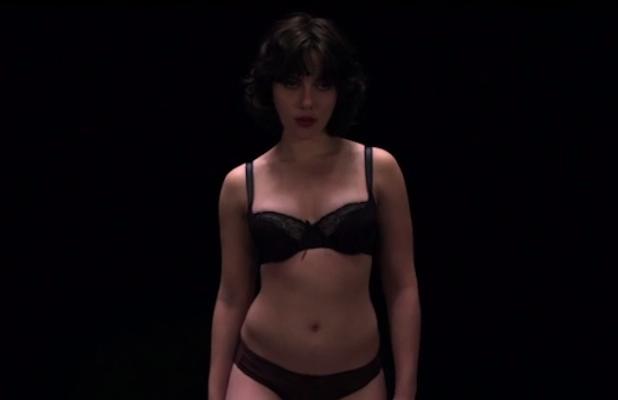 Tomorrow, or tonight at midnight, if you’re that big a fan, the movie of “Ender’s Game” will come out. What you might not know is that there has been a grassroots movement, spearheaded by the folks at Geeks Out, to “Skip Ender’s Game.” I know a lot of people who have had questions and concerns about the reasons to boycott the movie, along with people who have no idea why anyone should boycott the movie. So, I sat down with one of the founding members of Geeks Out for a chat about the movie and the boycott. END_OF_DOCUMENT_TOKEN_TO_BE_REPLACED