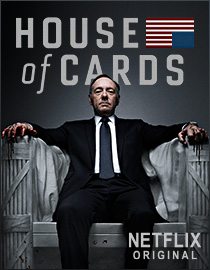 Similar Too: The West Wing, Homeland, Breaking Bad (or maybe it’s better called a combination of those shows?)

Well, here it is. We’ve been talking about it for years, and now the time has finally come for web-based television. Analysts have been predicting that the state of the internet would eventually combine with that of television, allowing for TV shows to premiere, air, and be viewed entirely online. Netflix, perhaps America’s foremost distributor for on-demand streaming media, has certainly been an indication of how close we were coming to that day, but all their shows had aired on other channels previously. Now, however, Netflix has finally bridged the gap, with House of Cards, a new political drama that had it’s entire first season put on Netflix on February 1rst. House of Cards Season 1 has already become Netflix’s most watched program, and has been met with high critical acclaim. So in regards to popularity and it’s reported potential to change the television landscape, the only question is if the show really lives up to all the hype.

A remake of a British mini-series from the 90s, House of Cards Season 1 is set in contemporary America and focuses on main character Frank Underwood (Kevin Spacey), a South Carolinia congressman who can’t really be called a protagonist. The character is so ruthless and unquestionable in his methods that he can’t really be seen as an anti-hero either, he’s closer to being a straight up villain. The closest thing we have to a protagonist in this show is a young journalist (Kate Mara) who gets tied up with Frank after he’s denied a promotion to secretary of state. We then see how Frank has composed an elaborate plan to get what he wants in office, and needless to say plenty of bad shit goes down, from his involvement with a drug-abusing Pennsylvania congressman (Corey Stoll), to the tilting relationship he has with his wife (Robin Wright).

I have to admit, it’s funny that I was watching this show intermittently while viewing The West Wing. I couldn’t help but compare the two, as they’re both political dramas set amidst a fictional presidential administration, but the two shows don’t really have very much in common at all. If anything, House of  Cards is a more serialized version of The West Wing, that’s also R-rated, and happened to have really brushed up on it’s Shakespeare. Right from the start the show has really noticeable tension, from the music to the camera work. As the story goes on, and the twists become more regular, you start to realize that none of these characters are safe, and the show certainly doesn’t disappoint in regards to closure. For this reason the show really benefits from having it’s entire season released at once, as viewers can go through the show at a brisk pace without it ever losing any of its intended momentum.

The show certainly has quite a group of talented backers, with Beau Willimon (The Ides of March) as showrunner, and Eric Roth and David Fincher as producers. Fincher (The Social Network) definitely appears to be a driving force for the show, as he directed the first two episodes. Having an A-list director for the first two episodes could have actually hurt the show stylistically, similar to how people were complaining that Martin Scorsese’s direction of the pilot of Boardwalk Empire made the work of that series’ other directors seem inconsistent. Instead though, the show never outdoes itself, and it actually retains its unique style throughout. One of the most distinguishing features of this show is that they allow Frank Underwood to break-the-fourth-wall from time-to-time. Such a tactic could have proved gimmicky, especially for a show as serious as this, but instead it acts as a fascinating feature for us to get inside the mind of this cunning character, and eventually we realize that we the viewer are the only person that Frank tells the truth too.

With all it’s double-dealings and smoky room politics, the show sometimes feels like a 70s political thriller, but it’s undeniably ultra-modern. There’s a lot of usage of technology on the show, including internet usage (the show makes a reference to how satirical youtube videos can really harm a politician’s career), but most notably cell phones. Introducing another cool technique that plays with Fincher’s visual sensibilities, occasionally you will see character texting. Rather than have the camera zone in on the cell phone, the view will instead stay on the character and then a dialog box will pop up that shows what they are reading/saying. It’s used quite effectively in the start of the season, although it becomes less common in the second half. I really hope that the next season will find even more clever ways to use this technique.

So how’s the acting? Well, it excels here too. Kevin Spacey has always been one of our generation’s best screen actors, and he certainly indulges in this character. Speaking in a southern accent and using colorfully flamboyant language, Frank Underwood holds every scene he’s in, even if we’re aware of how evil he is. The supporting cast is all great too, with Kate Mara proving that acting ability runs in her family, as yes I will admit that I was under the impression that she was her sister Rooney for most of the series (I misread the credits I guess). Corey Stoll also gives a rather excellent performance as the womanizing and drug-addicted Peter Russo, as he gives the character the right amount of affability and cowardice that makes you really wish that he achieves redemption.

House of Cards is certainly a great show, but it isn’t perfect. The plot is spread too thin at times, and there is a sense of filler every now-and-then that does give me the feeling that I’m watching a TV Show. I feel that the best television dramas (The Wire, Breaking Bad, The Sopranos) have a more organic feel, and really give you the sense that you’re viewing a great movie, or reading some sort of excellent novel. House of Cards Season 1 does feel a bit televised at time, but that shouldn’t distract that this is possibly the best freshman season of a show to come out in a fairly long time. Already you can feel the writers and film makers have found a voice for the show, and it results in a sublime series that really unravels the seedy side of politics. With a second season already in the works, as well as the much discussed revival season for Arrested Development nearly here, Netflix might very well become the best television breakout since AMC, and it’s not even on TV.