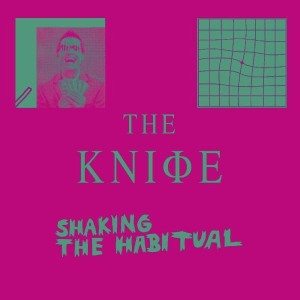 The Knife:  Shaking The Habitual

Leave it to The Knife to create the most divisive and puzzling album of the year. Last week, when the Swedish siblings’ long awaited 4th album became available for streaming, message boards instantaneously became flooded with polarizing viewpoints regarding its quality. While many seemed unable to form an opinion at all, others attacked the group by stating the album was overloaded and pretentious. Indeed, at nearly 100 minutes, Karen and Olaf certainly are testing our patience. At times, such as the 20 minute drone piece “Old Dreams Waiting to be Realized”, it is even tempting to feel as though the two are playing a trick on us. Believe me though, “Shaking the Habitual” is no April fool’s joke – The Knife have never been more serious.

The Knife have been devoted to their own brand of weirdness for some time now, so it’s not entirely a surprise that this album is as frightening as it is. The surprise with Shaking the Habitual comes with the absence of anything that could be considered within the realm of pop. “Silent Shout” was already otherworldly, so in order for the group to continue to defy expectations they have stretched their trademark sound to incomprehensible means.

About 2/3 of the album is jarringly inaccessible experimentalism. It is easy to see why the group considered releasing the album under a pseudonym, because this acts as the antithesis of their previous work. The 13 tracks range from being confrontational (Full of Fire) to barely rising above a whisper (Cherry on Top). While I love experimental music as much as the next music critic, not all of these tracks truly work.

Regardless, I can without a doubt claim that this album has groundbreaking moments on it. That may be more than I can say about any album that has come out this year. With that said, there are other sections (specifically the droning ambient pieces) which have been done to a far more interesting degree by other artists. This can make for a frustrating listen, but I was never tempted to skip tracks like many other people seem to be doing. The album is meant to be listened to in its entirety. For instance, “Raging Lung” acts as a monumental payoff after the aforementioned 20 minute drone track. The album wouldn’t contain the same specific appeal if the quieter pieces were cut out. There is a sense of scope here only possessed by a handful of albums; most recently, Swans’, “The Seer”.

Perhaps the album’s most interesting aspect is its message.  Shaking the Habitual is about realizing how you are an evil, selfish being. “Ready to Lose” is a song about how we must learn to rid ourselves of our dirty habits for the bettering of humanity. For instance, if you are white, you must realize that you are given certain advantages not afforded to others, and you are merely lucky for having this inherent advantage within society. Refusing to believe this fact means that you are racist and a supporter of our evil capitalist society.

The topics brought up throughout the album include gender issues, patriarchy, male hegemony and so forth. This is an incredible, AOTY worthy basis for an album, however, the abstractness of the music makes it very hard to grasp in its entirety. In fact, if it wasn’t for interviews where Karen and Olaf explained the origins of the album, it would be hard to decode at all. The Knife have a message that is meant to be heard by everyone, but it’s going to be heard by very few when they refuse to work within a digestible framework.

It is easy to see why Shaking the Habitual is made up of such cold, unsettling music. If the album landed The Knife another hit such as “Heartbeats”, their message towards the destruction of the wealthy would have proved hypocritical. Nearly every political album has fallen flat for this reason, so it is a testament towards The Knife’s vision that nothing on this album could top any chart. It is also startlingly brave to potentially isolate your fan base by putting out a record as daunting as this. It turns out The Knife are even more fearless than we thought, and they managed to make some spectacle worthy music while proving it. When looked at by these means, “Shaking the Habitual” is a complete success; unfortunately, it won’t change the world.

4.) Without you my life would be Boring

7.) Old Dreams Waiting to be Realized