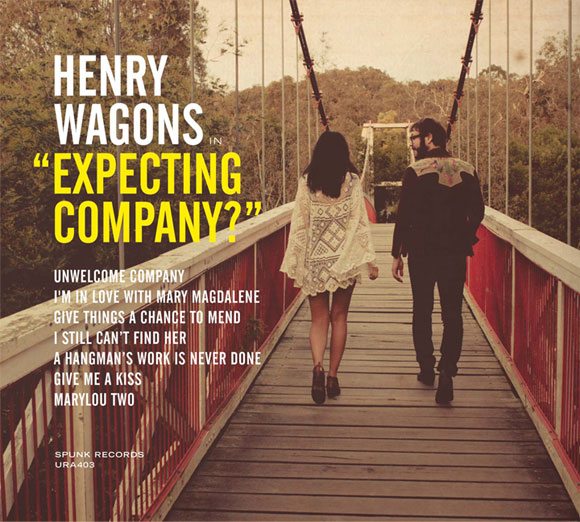 Henry Wagons’ EP “Expecting Company,” brings the vintage Johnny Cash sound back with a twist. Wagons, of Australia, expressively howls through the 7 track EP with the accompaniment of other vocalists on almost each track. It’s a trippy sound with raw vocals that are undeniably full of Western masculinity.

Wagons’ has carefully paired other vocalists on his tracks, where not to shadow his talent, but rather compliment each note. While I listened to the opening track, “Unwelcome Company,” I felt transported into Wagon’s and Alison Mosshart’s state of mind, which was probably altered by some sort of recreational supplement. It encompasses that 1960’s sound and channels the track “Jackson” by June and Johnny Cash, with a darker edge.

During “Give Thing’s a Chance to Mend,” I could not stop thinking about film. Initially I was confused why I felt I was in a movie and then it came to me. All I kept hearing was Nancy Sinatras “Bang Bang” in the female vocals section. I did a little research and found that this song with featured in the film Kill Bill. The similarities are almost frightening. The strum of the guitar progression, the sound of the vocals and even the tempo; it’s a good song, but I still feel the album altogether is missing something.

The track that saved it for me was “I Still Can’t Find Her.” It sounds original and catchy (yet not annoying) while keeping me interested. The track tells a story and is musically and lyrically captivating. It has that something that the other tracks don’t have, and for me that’s heart.

Don’t get me wrong, the other tracks on the album are good, but it feels like Wagons may be trying a little bit too hard. His problem is trying to balance being too cool with a sound of country and a side of raw rock and roll. Sometimes a little bit of everything doesn’t make an album commendable. He should stick to what he’s good at and that can ironically be found in “I Still Can’t Find Her.” Since it’s a short EP it’s fairly inexpensive, so give it a listen it’s at least worth the exploration into Wagons’ head.