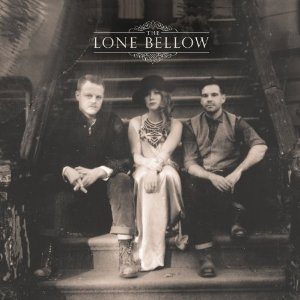 Listening to my “OLD FAITHFUL” radio station 90.7 WFUV one autumn afternoon, a voice came through the speakers of my car. I said to myself, “Is this some sort of compilation featuring Steven Tyler?” I listened hard and still couldn’t figure out and reached for my Shazam app for assistance. THE LONE BELLOW – YOU DON”T LOVE ME LIKE YOU USED TO.

After a little research, it turns out that Steven Tyler has nothing to do with THE LONE BELLOW. The group is actually from Brooklyn, NY who formed after the lead singer Zach Williams, wife suffered temporary paralysis. He learned to play the guitar and discovered that his vocal range was extraordinary and began to pursue his career. THE LONE BELLOW now consists of Brian Elmquist on Guitar and Vocals, and Kanene Donehey Pipkin on mandolin and vocals.
The harmonies created by the group are clean and cut. Replicating the sound of a fine trained choir while beckoning the American Folk Rock genre. To have such a clean sound with this genre really makes THE LONE BELLOW stand out with the best.
In their opening track “Green Eyes And A Heart Of Gold”, they set the mood with a train like enthusiasm of getting up and going. He keeps his lyrics simple but not boring. Where some groups simply repeat their chorus, verse or bridge (middle 8), Zach Williams recreates it. During the first half of this track, he has a sub chorus / verse that starts of as “We’re Broke in NYC…”. It is sung simply with the standard melody of the song, and then in the last half of the track he breaks it out again but almost as a bridge, where you can’t even distinguish that the two sections are one in the same aside from the lyrics being identical.

Probably my favorite, and I think their first single is “Bleeding Out”. Harnessing the power of the three to create a beautiful trio of harmony, in a Vienese Waltz, while having a more rock edge with a folk sound. The literal beating of the drums lets you feel the emotional beating that Williams experienced while his wife was suffering. I imagine him walking down the streets with the weight of the world on his shoulders expressing
All the buildings, they lean and they smile down on us
And they shout from their roof tops, words we can’t trust
Like you’re dead, you are tired
You’re ruined, you’re dust
Oh you will amount to nothing, like tanks full of rust
But we scream back at them
From below on the street
All in unison we sing, at times, been redeemed
We are all of the beauty, that has not been seen
We are full of the color, that’s never been dreamed
Well, nothing we need ever dies, yeah

The group is full of passion, harmony and simplicity. THE LONE BELLOW is on the radar to be one of those break out groups and with a little bit more promotion, touring and street cred, this group has the potential to share the spot light with groups like Mumford and Sons and The Punch Brothers. Tomorrow night the debut their first show at Carnegie Hall. So if you’re in the area, I’d grab tickets and get the full LONE BELLOW EXPERIENCE.