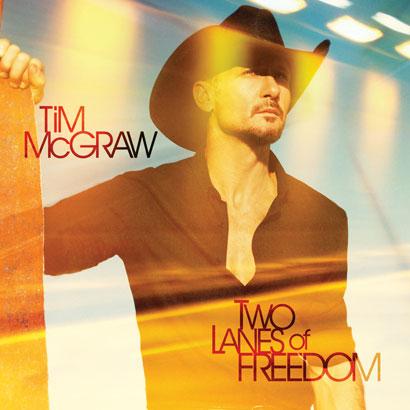 Tim McGraw’s newly released album “Two Lanes of Freedom,” has still truckin’ got it! The new album, his first on Big Machine Records, is indicative of its title. After a legal battle with previous label “Curb Records,” he truly sounds like he is free to express his musical talent and kicked the last label to, well, the curb.

The title track, which is the first song on the album, serves as an invigorating introduction to the album. It embodies the heart of country, with lyrics describing, “Now honey, how fast you wanna go, NASCAR driving Miss Daisy” and “God made old country roads for driving and dreaming.”

“One of Those Nights,” the first single released off of the album, has a pretty slow tempo; it’s not as slow as a ballad but not quite there to be considered upbeat. It’s a good track, don’t get me wrong, but I feel that the title track would have been a better single to release first. It’s romantic and sweet and encompasses all that is a ballad except the tempo, explaining a night out with a lover, while being proud and enamored with the one they are with.

The other tracks are just as notable though, and bitterly honest. “Friend of a Friend,” is about a past love who just won’t get the hint to go away, with “Nashville Without You” giving tribute to the town and those who have made it the place it is today such as Willie Nelson and Dolly Parton, while “Number 37405” chronicles an individual who drank under the influence and took a life, ultimately serving 15 years of prison, all while life kept moving on with out him.

But the most fun track is “Truck Yeah.” It’s a little cliché, but it’s loud, it’s proud and it’s sexy. It shows that country can be trendy and prominent even here in Long Island where it is so easy to say, “I listen to everything except country.” With the raw guitar riffs, relatable content and easy to sing along chorus, “Truck Yeah” invites the listener to sing along and shake it out.

The other tracks are great as well, don’t forget to listen to “Southern Girl,” “Book of John,” “Tinted Windows,” and my personal favorite, “It’s Your World.” You can skip over “Mexicoma” though, it’s a bit juvenile for my taste, but I’ll give McGraw a pass for this one. There’s also a collaboration that is beautiful with Taylor Swift and Keith Urban, “Highway Don’t Care,” that shows off the talent that all three have together.

The album is superb, and has set McGraw free of himself (and his old label for that matter). He is changing with the times, but still embodying his country spirit, gathering a greater and more diversified listening pool. There are too many great tracks on this album to pass this up and miss out on what I consider a heartfelt and fun album by the great artist Tim McGraw.