You are here: Home / ENTERTAINMENT / Dance Moms Recap: An Eclectic Celebration of Dance 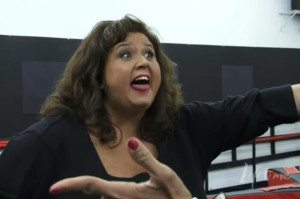 Last time on Dance Moms, it was the last of the five hour episodes, which, thank the hundred little gods!

We start out with the POS and Abby jumps right in with yelling at folks. We came, we danced, and Cathy ate it. This week we’re traveling to Dance Expression in Grand Rapids or something like that. Brooke starts us off on the POS because she talked to Rosa Parks, and that’s a no-no. I think Abby needs to reread her history book to remember what actually happened to Ms. Parks. Brooke and Kelly start laughing about it, which doesn’t please Abby too much. Brooke’s not dancing in the group for today/this competition, though she’s expected to come to class. McKenzie’s on the bottom because she didn’t dance last week and was running around. Abby acts like it was McKenzie’s decision not to be in the dance last week, which might have been, but still. Nia was outstanding, but we don’t know why she’s on the bottom. Holly’s upset. Kendall’s on the bottom because that’s where she is.

Chloe takes second and is back where we all started. She got the overall high score on the duet but it wasn’t the best performance of her life. Paige joins her, but it’s up to her to really WANT to dance. Maddie’s on top because, duh. Everyone claps as if this is a big deal. Kendall’s doing a solo that’s going to be stamina based and is told to start jogging in place. Chloe also gets a solo and is super excited. Maddie’s not doing a solo because she’s doing a duet with McKenzie called “Run from Mother,” which is starting to weird me out. The group is called Gold Digger, which sounds just plain dumb. Everyone starts jogging.

Up in the DMPAL, Melissa drops that she got married. All the other moms are shocked and confused. Did she wear the dress? Yes. Kelly was apparently in on this because Paige was part of the wedding party. We get pictures. Gold Digger might be a tribute. Uh oh.

There’s a surprise guest. Some woman swans in wearing a whole lot of makeup. Who is this? She’s apparently Rachelle Rack. Who? Oh, she’s a musical theater dancer. Pretty col. She’s got a lot of eye shadow and camel toe going on. We’ll be doing Fosse, and at first, I’m nervous, but Rachelle shows that she’s knows what she’s doing. There’s a lot of pep talking and Paige gets some featured dance stuff. Go Paige! Everyone wishes Brooke was here and Rachelle flips over. Abby thinks that the dance is being taught too slow, since she only gives the students two days to learn. Way to go. The moms are concerned that the girls are learning bad technique, which shows they’ve never seen any Fosse.

Brooke is running a little late and Abby thinks that she should have been able to call a taxi. Sure lady. Other people are running late and Abby bitches about everything. Jill semi argues with her. Kelly walks around and slams the door to the dressing room. The girls are all pleased to be doing something different. The moms talk more about Rochelle and Kelly brings up these plant extract wraps to try and slim down. Christi thinks there’s not enough fabric for herself.

Abby’s trying to “clean up” the routine which means she’s changing it. It’s obvious she knows nothing about Fosse and is already yelling at the girls for doing Rachelle’s choreography. Chloe’s the first one to cry. Congrats.

Maddie and McKenzie are with Abby and practicing their Mommie Dearest routine. Up in the DMPAL, the moms ask if McKenzie’s foot is ok and then talk about dancers working through the pain. Chloe comes out and Abby wants to see this without a mistake. Oh good. That’s gonna go well. It’s an edgy 80’s theme, complete with eye roll. Chloe’s ready to do her best and comes out kicking. The moms think she’s doing a great job, though she misses the land out of a cartwheel thing. Abby doesn’t bother to actually address it as a mistake and fix it, and instead yells until Chloe’s in the dressing room crying.

Later, the moms are enjoying a Momtini and a seaweed wrap thing party. Melissa is wearing a great pushup bra and the moms wrap themselves in stuff and saran wrap. Apparently, Melissa and Kelly wander around naked in front of each other. Who knew they were that close?

Back at the studio, we’re working on Kendall’s stamina number, which is a Roaring 20’s piece. The moms all think she looks happy and we’re getting a lot of peanut gallery stuff. The group number rehearses and McKenzie gets pulled from the dance because she’s too short or she sucks or something. Everyone starts arguing.

We cut right to Dance Expressions! Why is there a blow up doll in the corner of the changing room? Anyway, we’re practicing and it turns out that in the span of two days, the group number has been changed way too many times and doesn’t resemble Rachelle’s Fosse choreography at all. Abby’s angry at everyone while Christi and Chloe have a pow-wow in the corner.

Kendall wants to beat Chloe, since she’s done it in the past, which seems really lofty.  Kendall’s solo, as we’ve said before, is a flapper number, and her dress is REALLY short for a flapper piece. Plus, you don’t normally see flappers doing cartwheels and other gymnastic s tricks.

Maddie and McKenzie come out with their weird duet. Why are these kids running from mother? I thought Abby liked Melissa. Anyway, McKenzie has to do the exact same choreography as Maddie and she’s turning it out, so I give her props for that. However, this really seems like Abby’s not choreographing around what the kids can actually do, but that’s not anything new. Melissa thinks the piece was great, like she always does, and thinks it will be a win, like she always does.

Chloe comes out and Abby’s ready to tear her apart. There’s a lot of hairography and flailography. She was even changing her spots on the turns, which is a hard thing to do. Anyway, she nails it, but as she’s walking off, she remains in character and does the “rawk!” horns, or devil’s horns or whatever, which sends Abby into a RAGE.

Backstage, we’re all working on the group number and Rachelle comes back to see how it’s going. Abby confesses that she changed the whole thing and took McKenzie out. Rachelle wants to see the choreography, but doesn’t look too hyped up about it. However, she maintains her professional demeanor. Abby starts in on some nonsense about how working on a Broadway show and running a competition dance team are two different things. You’re right. One requires long hours and lots of crying and stupid outfits and the other is some dumb fat woman yelling at 9 year olds.  Anyway, Rachelle thinks McKenzie looks fine and wants to ad her back in. Abby makes some comment about McKenzie drawing the eye because she’s short but Rachelle’s not having any of it. Abby snarks more about the difference between amazing performers and competition routine directors. Notice that the term “choreographer” was never uttered by Abby. I think that’s telling. Rachelle gives some things a go, starting out polite before taking control and going “It’s my choreography, I don’t have to ask.” HA! I love her. Unfortunately, Rachelle has a real job and needs to take off, leaving Abby and the girls by themselves, giving Abby another chance to bitch.

The moms ask about the make-up and Abby responds with “What did Rachelle say?” And since she didn’t design the costumes and organize the make-up and hair, she FAILED AT EVERYTHING! Jill starts on this whole “Abby, it’s your team, if you don’t like it, don’t use it.” By this point, all professionalism has left the room.

The dance starts and Abby’s already nitpicking and being a bitch. The number’s not bad, but they had a new choreographer, new dance styles and did this in two days. Abby seems to not understand this and expects shit that seasoned professionals wouldn’t put up with.

Awards. Kendall gets third and Chloe gets first, which, yay for her! Duet gets first, and the group number pulls in first. It’s an overall win for Abby, who immediately turns this into how Rachelle did nothing. What an ungrateful bitch. All the moms think the girls did good jobs, only Abby is appalled and proceeds to yell at everyone. Kendall was practicing backstage and Jill feels singled out. More yelling. Abby brings up Chloe’s rock hand sign, and acts like this is the worst symbol ever and who would DARE teach her this. We get a clip showing Christi talking to Chloe about this that we didn’t see before.  Then there’s this whole weird thing about how you’re supposed to bring something to the choreography, but not really.

Anyway, Abby talks about training the girls for careers, but in reality she’s not. The only thing she’s teaching them is that they’re going to have to put up with bitch and annoying egotists in the field. We end there, thankfully for me.