You are here: Home / ENTERTAINMENT / Game of Thrones Recap: I’ll Be Your Mother Now 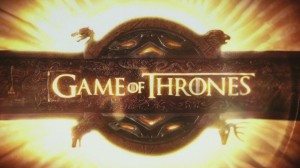 Previously, on HBO’s Not Enough Naked People, people ran around. Some got caught in the mud and some got chained to a St. Andrew’s cross and Daenerys kicked everyone’s ass.

We start out in the cave of the Benevolent Brotherhood of Man, getting ready for Sandor’s trial by combat. Beric gets ready by lighting his sword on fire. The battle is super dramatic with lots of swordy shots but we’ve seen shit like this in every fantasy and period movie since Errol Flynn was old enough to don a pair of tights. It’s very nail biting until Deric gets stabbed and falls over. Sandor looks relieved but Thoros jumps up and starts praying over Deric. Arya’s pissed. Deric stands up, completely alive. At first, Arya’s super happy about all this, but then gets told that, no, Sandor’s been acquitted and gets to go free. Arya’s back to being pissed.

Up in wildling country, we see a lot less snow. Red Beard talks to Jon about the castles guarding the wall. There’s a lot of penis waving and Beardy’s all “I like you but don’t think I won’t stab you. Afterwards, Ygritte steals his sword and that isn’t a euphemism, but could easily be an allegory. She leads him into a magical cave where I’m assuming there’s a hot spring, even though we don’t see the tell-tale hot spring steam rising. She gets all naked like and tells him to come have his way with her. He does. Something, something, cunnilingus. Afterwards, Ygritte is all “no one’s ever done that to me before” and gives a litany of all the men she’s slept with. Jon isn’t happy about this.

Brienne and Jamie end their trek from hell in a town, being given to Lord Bolton. Bolton’s none too happy about Jamie’s lack of a hand, and Greasy Lackey points out that the hand is still there, just not attached. Jamie asks about the capitol, and Bolton delights in telling him all about the battle, and then finally dropping the “yeah, you’re sister-wife is totally safe.” We bring in Qyburn to look at Jamie’s stump. Jamie doesn’t want to have his arm taken off and Qyburn’s all “hrm.” That’s gonna be REALLY hard, bro.” Jamie says to do it anyway and, oh, yeah, he doesn’t want any drugs. Apparently he wants to feel the pain. A bunch of 15 year olds wearing The Cure t-shirts nod in agreement.

Baelish and Cersei meet in some courtyard. Cersei drops some hints about the Tyrells and a plot is hatched, but not before Cersei makes some snippy comments about Baelish’s ability to find people.

Tyrion and Olenna have dinner, served by Podrick of the Magic Penis. Olenna and Tyrion discuss wedding plans, and unfortunately, Tyrion is no David Tutera (you might need to Google that). He complains that the city is broke and can’t afford a huge wedding. Olenna bites back with the fact that the groom’s family pays for the wedding. Tyrion mentions the war. Olenna returns the volley with all the Tyrell’s have done to support the war, and insults Tyrion by calling him a bookkeeper.

Arya and Gendry are arguing about Gendry’s going to stay and be the Brotherhood’s smith. He mentions how he has no family and Arya, trying to recreate hers, offers to be his family.

In Riverrun, Old Man Karstark sneaks into the cells where the young Lannisters are being held and kills them before rushing out. Rob is pissed. Karstark says that this is a war and we kill our enemies and all that. Rob continues to be severe. Karstark says that Rob has lost the north. Rob orders his execution. One man objects, because he was forced to watch. Rob says that he should be forced to watch the others die and then be executed himself. Catelyn warns him that the Karstarks will abandon Rob if the execution goes as planned. Cut to a rainy day where Karstark is on the chopping block. Karstark brings up old history and the blood of the First Men and finally denounced Rob as king. Rob beheads him.

Arya recites her litany of death. Thoros is drinking and Beric is showing off his scars of death. Arya asks how he comes back to life and Beric and Thoros try to explain the whole religion thing. Arya asks if they could have brought back her father. Nope. Sorry.

Selise is praying in her room. Who’s Selise? Stannis’ wife. (Nerd note, I think the actress is too pretty for the role) Stannis shows up and there’s forced talk about how he’s coming to have the sexy times with her, oh wait, he’s not. He starts talking to her about his affair thing with Melisandre and Selise stops him, saying she knows. Apparently, Melisandre and Selise have discussed this and WHY ARE THERE BABIES FLOATING IN JARS?!! No really WHY ARE THERE BABIES FLOATING IN JARS? We find out that they have one kid, a daughter. Who’s in a prison cell, and looks like she’s eight. We see that half of her face is scarred. This is no way reminds me of Romantic Gothic literature.

Brienne is bathing and naked Jamie shows up. The Jamie Ass Cam is set up and follows Jamie into the pool where Brienne is suddenly modest. Jamie points out all of Brienne’s flaws and screw ups until Brienne stands up, defending herself. Lots of camera angles going on here, folks. Finally, Jamie talks about his past and why he ended up killing the king. The thing is, every thought it should be done, but since Jamie broke an oath, somehow that makes everyone hate him. Jamie falls over and there’s an almost silly scene where Brienne refers to him as “The Kingslayer” and he goes “that’s not my name” before passing out. Carrie White would be proud.

Princess Shireen, Stannis’ daughter, visits Davos, who’s in a cell. She’s brought him a book, but he can’t read. Shireen offers to teach him, and he balks. She points out that both of them are locked up, so what else can they do?

Dany and her army of eunuchs are traveling along the river. Barristan and Jorah discuss old battles and Barristan wants to know what it’s like to serve someone with pride. Dany talks to a soldier about how HE feels and asks him his name. It’s Grey Worm and she says he can choose a better one. He finds this one to be fortuitous since that was his name the day he was freed. Barristan and Jorah swing their cocks around each other some more, and it’s not a sexy as you think.

In Riverrun, the Karstarks have left. Talisa and Rob talk about the implications. One being that he decides to attack Casterly Rock, which is now empty.

Loras meets some random blonde dude, and the conversation quickly gets all naked. It turns out, however, that Loras’ new boyfriend is a spy for Baelish and informs him about Margaery’s plan to marry Sansa to Loras and get them out of there. Baelish goes and talks to Sansa and starts going into creepy mode. Call me Petyr, indeed.

Tyrion meets with Cersei and Tywin. Cersei found out about Loras/Sansa and is looking extremely smug. The Karstarks have gone home, so once Rob is dead, Sansa’s the heir to the North. Tywin doesn’t want the Tyrells to have it. Cersei’s about to burst. Finally, Tyrion gets that what Tywin wants is to marry Tyrion and Sansa and flatly objects. There’s a brief mention of a past marriage, and its’ left at that. Tywin tells them both to do what they’re told. Cersei sputters when she finds out she’s to marry Loras. She must produce more heirs and she hates being a brood mare, again. Tywin leaves, calling them both disgraces.