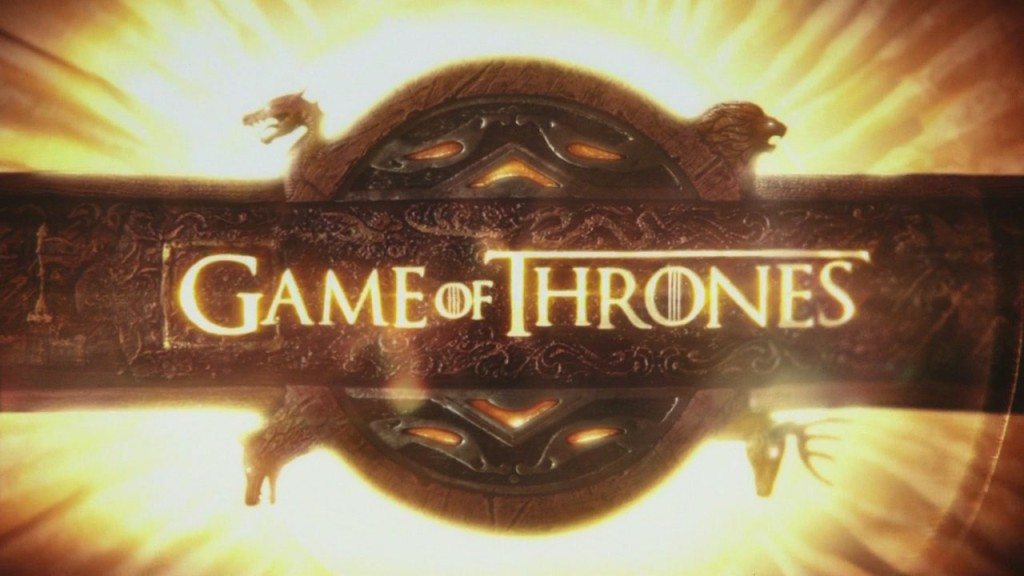 Last week on Game of Thrones, Matt Damon pranced around in a speedo, looking all fine and dandy, while Michael Douglas . . . wait, no. Last time on Game of Thrones, Dany wore a beautiful robe for some long haired hippy punk and Sam killed an ice zombie.

Rob is staring at his giant game of Risk, talking himself into meeting with the Freys and overtaking Casterly Rock. Catelyn isn’t sure about all of this, and wonders why Rob wants her to be there. Rob says he’s asking for her advice, since he’s ignored it before and ended up in the dog pound. After some deliberation, she says that she’s totally cool with sticking it to the Lannisters.

Cut to Walder Frey serving his guests small nibbles and salt. Now, for those of you who don’t know, serving and taking bread and salt has been a long standing tradition in many European cultures as a welcoming ceremony. Furthermore, both in Westeros and in many of the traditions this sprang from, hospitality was a very important part of the culture. In many places, your own worst enemy/Hitler could show up at your door step and if he was begging for hospitality, denying him that would be a grave sin. This is also why the actions of the townsfolk in the story of Lot and the angels is such a big deal. So, are we all caught up on history? Good. Rob and his people take the hospitality offering and are now guests. Rob gives a big speech and prostrates himself, figuratively. Walder comes out and says that Rob needs to apologize to his daughters and granddaughters, since one of them was supposed to be queen. I can’t tell if it’s the lighting, but a parade of rather homely looking girls is trotted out. Edmure looks nervous, since he has to marry one. Rob gives a noble-ish sounding speech. Talisa is asked to step forward and Walder points out that, yes, she’s hot. And then he proceeds to inform everyone that he can see what she looks like under her robe and that he can tell that she passes the pencil test. Firm tits have been many the reason why an oath was broken and Walder understands. All is forgiven, in an incredibly creepy and leering sort of way.

Dany and Daario are meeting and he’s flirting. There’s a back gate to Yunkai that he can get them through. Does Dany trust this guy? Grey Worm seems to, so let’s go do something. Really, this plot, right now, is just filler.

Sam is giving Gillie a history of the Night’s Watch, and it’s more boring than my history of bread and salt that you just read. Gillie stops him and asks how he knows all this, and Sam explains that he can read it. Gillie’s super impressed and calls Sam a wizard. While some might think this is foreshadowing, I was distracted by the shit eating grin that Sam got, and you can tell that the d20 beating inside his chest just grew three sizes. They stop and look at the Wall.

Sandor and Arya come across some random dude with a cart that’s stuck in the mud. Sandor fixes it, and then immediately punches the guy in the face, knocking him out. Arya stops him from killing cart man, and points out that Sandor acts all tough and only takes on old men and children. Arya points out that she knows a real killer and it took me a moment to figure out who she meant. She finally talks him out of killing the old man, who’s now just coming to. Arya knocks him out and they steal the cart.

Bran and Co approach Queenscrown. Or at least, I assume it’s Queenscrown. We’re not told, but we get another history lesson about the Gift, which is the land just south of the Wall. Rickon starts talking about Wildling customs and all the things that he’s “heard” and Osha thinks he sounds like an idiot. Random thunder and lightning mean we’re taking shelter in the tower.

There’s a farm in the middle of nowhere with some horses and it’s very quaint and bucolic and All Things Great and Small. Which means that there are wildlings hiding around about ready to fuck some shit up. The wildlings decide it’s best to kill the old man and take all the horses. Jon is against this plan, but he’s overruled. So, while they’re storming the farm, he knocks his sword against a rock and spooks the horses, which alarms the old farmer, giving him a chance to take off. Ygritte gives him a look.

Arya sees the Twins and is ready to be reunited with her family. Um, isn’t there supposed to be a tower in the middle? I know, I know. Shut up, fan boy. Sandor’s gnoshing on pigs’ feet, and mentions that Arya’s afraid. She points out that he’s super afraid of fire and he gets indignant. Arya promises to kill him one day and Sandor seems to believe her.

In the Leaky Tower That May or May Not Be Queenscrown, the ragtag group of castaways debates about how to get through the Wall. Osha is against this, and thinks they’re all going to die. Meera interrupts this because she sees a rider, who turns out to be the old farmer guy. He’s being chased by wildlings, in the rain. Hodor freaks out about the thunder and lightning. The Warg thinks he can hear something and there’s a tense moment before Bran ends up possessing Hodor and puts him to sleep. Meera and Jojen freak out a bit, quietly. The Warg tells Red Beard that he heard stuff, but Red Beard doesn’t care, because there are geriatrics to slay! Wolves appear on the outskirts, looking wary. Warg decides that Jon hasn’t done enough to prove that he’s a Wildling and tells him to kill the old man. Jojen tells Bran to possess the wolves, and we get a drawn out scene where Bran thinks he can’t but Jojen thinks he can that mirrors Jon’s “do it” “I can’t” scene. Ygritte just shoots the guy and the Warg feels vindicated. Summer starts growling and he and ShaggyDog kick the shit out of some Wildlings. Jon kills Warg, who transfers to a bird, trying to scrape out Jon’s eyes. Jon runs off to nurse his pretty face and Ygritte looks pissed.

At Yunkai, we see Daario, Jorah and . . . why is Shredder apart of their team? They sneak in and fight some random ninja army that’s not doing a lot, only to be surrounded by a slightly larger ninja army.

Cut to the big wedding! Walder escorts a veiled bride to the sept and Edmure looks nervous. His new wife is brought out and it turns out that she’s the hot Frey. She gives Rob a look, and Walder gives him this “Yeah, you totally could be banging that” look.

Back in the Leaky Tower, Bran realizes he is now an X-Men but is warned to never body surf again. Bran tells everyone that Jon was with the Wildlings and Osha says this is a sign they should go to Castle Black. She refuses to go further than that, and makes a play for Rickon’s safety. Bran decides to break up the Fellowship of the Outcastes and Rickon goes into full on Child Actor mode. We get a tearful goodbye.

Dany’s waiting with Barristan and they have some small talk before Jorah and Grey Worm show up presenting the city to Dany. Where’s Daario? He got some sort of cloth to make it all extra special.

At the Big Society for Creative Anachronism Wedding, everyone’s drinking and partying and cornholing and Edmure is the happiest groom of all time, because he doesn’t have to marry an ugly girl. Cat talks to Bolton and asks why he’s not drinking. He says that he doesn’t drink and he’s also married to a Frey. The fat one, since she came with her own weight in gold. Talisa and Roslin both look nervous for different reasons. Edmure just looks horny. Bolton leaves to go find a tree, and Talisa and Rob start talking and trying to not be cute. Cat looks apprehensive as one of the Freys closes and locks the main door. Grey Wind is upset.

Arya’s almost to the castle, but Sandor is stopped and the guard is being outright hostile. Arya slips away and Sandor turns back.

Walder says the Starks haven’t been given the hospitality they deserve. Cat sees that Bolton is wearing chainmail and knows something’s up. And then people start getting killed. Since this was a rather visceral moment, I don’t plan on giving you an accurate recount. Basically, the Starks and their supporters are killed, and Walder Frey watches on.

Arya is almost to the castle when things start going down. Soldiers kill Grey Wind. Arya’s about to start killing people but Sandor stops her, knocks her out and carries her off.

Catelyn pleads for some form of mercy, only to see her son get stabbed in front of her. Walder has no pity or remorse. Catelyn Stark cuts Walder Freys wife’s throat, and in turn, has her own throat cut. End credits.