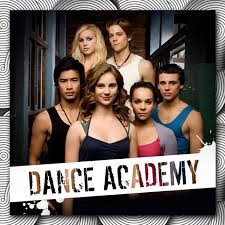 Second Dance Academy in a row? That’s right folks; we’re playing catch up here! What happens to Tara and the gang?! WHO KNOWS?!

Previously, on Dance Academy, Tara was the Wurst and then she was the Best, and now she’s sort of in the company!

Tara tracks down Christian, and I have no idea about the geography here, but these kids sure to a lot of traveling around, for dancing 8 hours a day, six days a week. Christian is staying with his dad, lounging around and being emo. It didn’t work in Twilight, and it doesn’t work here, kid. Plus, we’ve seen this attitude before, and it wasn’t cute in season 1 or 2. I was hoping we were over this crap.

Anyway, the three all-stars head to rehearsal with the company. Excitement. Ben’s wearing a name tag, because, why not? Tara is beside herself.

We start out with backstage shenanigans. Ben is looking for a changing room, and the chorus boys send him downstairs to the principles rooms. The main principle dancer is a complete ass-hat and tells Ben to get lost. Ben gives his best kicked puppy look and shuffles off.

Tara and Grace head to their dressing room and Grace immediately starts out by being a jerk to Tara. As they walk in, though the other girls have put up Grace’s ballet magazine cover all over the place. Grace is not amused, and it turns out that Isabella, Ethan’s ex-girlfriend is here. Tara is saved! They bond, and the other girl is freaked out by walking in on Ben, changing in the hallway. Note, this would never happen. Backstage, you just about don’t care what the other people are doing and it’s not until you get some sort of star status that you can afford to pretend there is privacy. Showgirls does a better job of showing people backstage, but this is also a kids’ show.

Abigail and Katrina, meanwhile, are putting together a random audition video for Abigail, who has decided she will never be a ballerina. Abigail is dead set on what she feels she needs to do, which is certainly not a metaphor, at all.

Christian is being emo and skater with his emo skater friends.

At rehearsal, the company is doing some weirdo chicken farm dance. Tara and Grace are told to watch until they pick it up. Grace, of course, immediately jumps in. This is not how rehearsals work, folks. Plus, I can’t tell what the hell this stupid chicken ballet is, and it’s pissing me off. The director urges Tara to jump in, and Tara starts to ramble about being a farm girl and chickens. She jumps in and promptly messes things up.

Abigail does a series of non-ballet numbers and Katrina films them.

Christian is still being a hooligan, but starting to miss dance.

Tara starts ripping up her leotards, thinking that she has to look all flash dance for the other people in the company.

Christian’s dad finally gives him the “Do something or leave” talk that’s been building up.

At company rehearsal, Grace is in full on punk ballerina wear, and starts making fun of Tara, who’s dressed like a student, and bonds with Isabelle. Everything goes along smoothly, and there’s talk about Giselle (finally! A real ballet!) until Saksia comes in!! DUH DUH DUUUUUUUUUUUUH!!

Abigail approaches Miss Raine about getting some sort of letter saying how much of an amazing dancer she is, even though she’s thinking about leaving the school. Miss Raine says, “No.” End of story.

Christian is pissy while making surfboards. Some of his friends show up, and it turns out they’ve stolen the car they’re in. Christian wants to go home, but they won’t let him until he threatens to scream, and they call him a wuss, and he gets out. He comes home, hops on his motorcycle and drives back to Sydney. Let’s never talk of this again.

Tara sees Saskia and tries to hide. Saskia sees through this and wants Girl Talk. She goes into mentor mode, and sort of apologizes before launching into another series of back-handed compliments that are designed to tear Tara down while sounding like good advice. Or something. This is pretty strained as it is, since Saskia has no reason to be jealous.

Katrina gives Abigail the video, and while it’s not what Abigail ordered, it makes her cry. She ends up, alone, trying to throw all her dance videos into the ocean. Miss Raine takes a moment and sits her down for some talk. Abigail feels she’s not good enough and wants to leave on her terms. Miss Raine stops that and tells her to take a sabbatical.

We end on the Chicken Ballet. It’s weird and I have no idea what’s going on. Tara is second guessing herself, of course, and Ben is being stupid. Finally, Tara starts doing her own thing, but I can’t tell if it’s a hallucination, her screwing up, or her being a diva. Did she just do her own solo? Anyway, Quentin Crisp isn’t happy, but Saskia shows up to stand up for her. Why? I have no clue.

Afterwards, Tara is leaving the theater, but some little girl wants her autograph. I guess she did something right? Who knows? They get home and Christian is there. Waiting to be let back in!

Will he or won’t he? Find out next time, on Dance Academy!!