You are here: Home / LIFESTYLE / Does Size Really Matter? 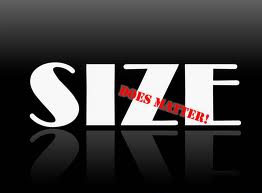 No we aren’t talking about the size of the house you are buying nor how many ounces of steak you want for dinner tonight (although some people prefer to pitch a tent and like a good 8 ouncer.  Giggity).  A big thing (so many puns) that is talked about in the gay community to a certain degree is the size of either your own or someone else’s manhood.  Men consistently worry about their sexual performance on a multitude of levels and one of the degrees of their worries is obviously cock size. The last thing we want is to get naked with the other person and for them to have what I simply call “The Look”.  That look of “Oh crap, what am I going to do now?”.  No one wants that.   When we watch a good ol gay porn flick, the last thing we are expecting to see is either guy having a small (or flaccid) cock on screen.  So how does that translate into real life?

This can be a variable into so many different things.  Does it matter for sex just being sex?  What about for a long term relationship, is this something that would be a big concern for your partner in the long run if they aren’t feeling sexually fulfilled because of it?  I polled a bunch of different men I know who come from a variety of backgrounds in terms of color, shape and size and had quite an interesting amount of things to say when it comes to this issue.

“Well I think that’s a yes and no. Sex is sex and having a fulfilling sex life is important to any relationship . Love is love and they aren’t exactly the same thing.  Dick size sure doesn’t matter for love. Would it matter to some people for sex? Probably to some extent”.  Another friend of mine had something similar to say- “Well with a sex partner, cock size is important for some… not all.   In terms of an LTR –I dont think so.  Sexual attaction needs to be there but in an LTR, sex and lust is not the primary focus of the relationship.  The dynamic changes….companionship, trust, comfort, safety along with dealing with challenges as a unit: mortgages, potentially children, marriage… it really shifts the priorities.”

What about when it comes to just a hot one night stand?  Let’s say you are at the Eagle or a super busy gay bar that has a ton of available options for guys you can bring home.  Even those can have variables.  “Only if I’m looking for that. I usually top people and don’t care how big their dicks are”, one friend of mine says.  If you are playing the top card, usually the focus isn’t on the front of the pants but more so the back of them.  What happens about being in the other arena AKA the bottom?  “To me, it can depend on a lot of different things.  Sure if they are big it’s great.  I happen to know a good amount of guys who are the bottom usually that are afraid to date or even have sex with a guy who has a larger than normal manhood because they mentally don’t know if they can take it.  For me, it just depends on how good you are at topping. ”

At the end of the day, the consensus that my friends really gave to me (and I agree with completely) is that it is all psychological. Sometimes it can be a situation where it really is all in your head.   “When it comes to size, I don’t think it matters.  The most important factor is how good you are. Where your manhood matters is in what she/he may or may not “report” to his/her friends. But for the most part that’s not something you’re worried about”.  A straight friend of mine said that last quote.  I just added the his/he part.  He has a true point on this though, in that it really is a slight social stigma that we have to deal with in order to have a good time with a partner or someone that you won’t remember their name the next day.

What do you think?  Does it matter?