You are here: Home / ENTERTAINMENT / Reign Recap: No History was Harmed in the Making of This Feature 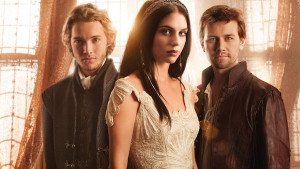 Reign. You might have seen the posters of it around town, with some woman who almost looks like Kim Kardashian sitting with two generic CW hotties behind her. Once I realized that it was about Mary, Queen of Scots, I knew that it was going to be a hot mess, and I should totally jump on that train. So, join me as I recap “Reign.” Warning, you might need a bottle of wine to go with this.

We open up in a forest with a young tree with white flowers and a bunch of symbolism. Young, Sexy, Nostradamus walks up to the tree. How do I know he’s Nostradamus? Because I’ve seen the preview. Blood drips down and he wakes up panting. I think. I might have already been glazing over.

The scene cuts to a stone structure, and for a moment, I thought they were going to try to pass this off as a Scottish castle. I mean, they gave all the French people British accents, so why not? It turns out that it’s some random convent in the FRENCH countryside, and the Exposition Fairies tell us it’s 1557, and Mary Stuart is being raised there for her protection (the first of infinite historical inaccuracies. In fact, it’d be easier to say what this show gets right). Mary is out, playing some prototype soccer game with the other girls, while a Muse/Mumford and Sons knock off band plays over. The girls and nuns sit down to dinner. One nun keeps looking at Mary before getting a really bad case of bleeding ear and foaming mouth and dies into the soup. The nuns all rush to “save” Mary, which, if one of them is the killer, it’d be REALLY easy to stab Mary in the press. You also might want to eat dinner inside, or keep Mary’s identity a secret or something. The nuns tell Mary that it’s not safe here, so we’re shipping you to live with the king of France. If that was the safest place for Mary, AND she was engaged to the Dauphin, wouldn’t she have been raised there? I mean, that’s what people in History decided, but it doesn’t make a good opening, I guess. All the nuns and girls see Mary off. Again, not doing the secrecy thing very well.

At the court of France, a young, vivacious, tall, healthy Francis (the real Francis was only one of those) is coming from having sex with someone and runs into some guy who gives him grief over it. Mary’s arrival has everyone twittering, especially Catherine d’Medici, who was not a red head or English, who is upset since her daughter’s marriage to Phillip II of Spain is about to be overshadowed. Henri tells Francis that Francis is going to marry Mary, but Catherine goes into Mother, Dear mode and implies that she’ll make the bad girl go away.  Cut to Catherine and Nostradamus. Catherine is concerned about love and if she will be able to brow beat Mary into doing her bidding.

Mary shows up and there’s a big scene of people in dresses and shoes exiting carriages. Four teen girls are there, looking like the Midge, Francie, Teresa, and Skipper to Mary’s Barbie. While they all exit and meet, a scary figure wearing a sack cloth over his/her head looks through a window. It’s very Jane Eyre, but probably more Flowers in the Attic. More Faux Mumford music plays and Henri and Diane de Poitiers arrive. The audience knows who they are because Midge tells us so. I know who they are because I read things regarding history and Diane de Poitiers is the ultimate cougar. We get an assessment of the males and the teen girl squad twitters. We find that the other teen boy from the opening is Sebastian, Diane’s only son. Catherine shows up, fashionably late, and stands in front. Francis shows up annoyingly late and there’s a goofy re-meet cute. Nostradamus has a vision and, after Catherine’s prodding, says that Mary will cost Francis his life (in reality, she doesn’t).

Some noble lady talks to the Teen Girl Squad about their duties. They’re all wearing some sort of Disney princess dress, and I realize that we’re not even looking at period outfits, but stuff to look period but also like you could wear it to a Game of Thrones themed prom. That makes this even worse/better. There’s a drawn out sequence of Tudor styles of putting make up on, just cause. Mary goes wandering around the castle. She comes across an abandoned room where her old toys are and Francis is making swords. Don’t you need a forge or something really hot to do that? It turns out that Franics doesn’t want to be a prince and would rather make swords or movies or something equally predictable. Mary says that she can do poor people stuff, too, so they can get married and go milk goats and catch the plague like everyone else. Francis doesn’t like this idea, since he seems to not be that into Mary. He leaves her to go find some naked teen girl named Natalia.

Mary goes outside to collect rocks. Everyone has to have a hobby, I guess. Her dog starts freaking out about something in the woods and Mary gets up and brings some of her stones to Francis, who’s currently finishing up with Natalia. Mary offers her stones as a gift (hrm) and Francis goes into stupid teen male boyfriend mode and gives her a speech about respecting his room or something. Mary goes back into the woods, where the dog continues to freak out and bounds off. Sebastian stops her from running into the woods. They banter. I smell a love triangle, which smells like Satan’s ass after bathing in hot wet garbage. No really, I hate love triangles.

Someone is having a bath, and when some boy shows up, it turns out that it’s Midge. Her boyfriend/thing came to France on a boat, and no one really questions this. They go to Catherine seeking asylum or permission, which seems like a stupid idea, though she IS the queen of France. Colin is the son of a servant and Catherine is very… impressed by this and asks him to stay and talk, while throwing everyone else out.

One of the Not Marys (I can’t remember which one) tells Mary that Sebastian is BAD, which of course, makes Mary’s teenage heart flutter even more. That’s when she notices that her river rocks are sitting on her dresser. This is followed by ominous creaking, which Mary follows until she sees a hand on the screen in a corner of her room, and a voice tells her “Don’t drink the wine!!” After the voice leaves, Mary finds the secret passage and hears someone running.

It’s time for the overshadowed wedding of Elizabeth to Phillip II of Spain. Only, in this version, they are about the same age (Phillip, for those of you who care, was married to Mary I of England. You know the scary mean one in the movie Elizabeth who killed all the Protestants). Courtly dances happen. Colin is not talking to Midge, and Midge gets jealous. Mary remembers being told to avoid the wine and has to deal with awkward looks sober.  Her way to get around this is to grab her friends and tell them to kick off their shoes and dance. They start twirling around like flower girls at a wedding reception and mysterious feathers start falling from the ceiling. Slow-Mo love cam is in full effect. Afterwards, everyone heads to the bridal chamber for the consummation ritual.

By everyone, though, I mean a few old men we’ve never seen and Mary and Co, who are hiding. Sex starts happening. Phillip is super young and has a British accent. Everyone gets oddly turned on and runs off. Skipper doesn’t like it and everyone runs around with their prom dresses flailing. Teresa runs to the top of the stairs and starts feeling herself up, when she’s interrupted by Henri. This is going to be fun.

Mary and Francis have a heart to heart which turns into teenage screaming. Francis says he needs to be responsible and that could easily mean not marrying a Scottish queen if he needs a better alliance. Good luck with that, kid.

Mary is sleeping and Colin creeps up, whispering “I’m sorry” and attacks her. Later, Midge says that Colin was forced, though we have no idea how she knows this. She begs Mary to help. Mary asks Catherine and Henri if she can speak to Colin, only to find out that Catherine is pretty heartless and Colin has been beheaded. We get a graphic image showing us that this really happened. Midge takes this pretty poorly and blames everything on Mary. Mary tries to reason with her, the best way her tender 14 year old head and heart can, but it seems pretty futile.

Bastian shows up with Mary’s dog in a way that cements the love triangle. His interplay is being watched by Diane, his mother, who’s concerned that the dog didn’t find the blood, or something. Ominous.

Francis accosts Mary about how he can’t do this. Catherine watches on with glee, I think. She and Nostradamus whisper in the cathedral while Faux Mumford plays. We end with Mary on the battlement, at night, talking to the mysterious bag lady, who randomly disappears.

Join me next week!!! Hopefully, this show will continue to be awful, because I sure couldn’t take it if it were just boring!