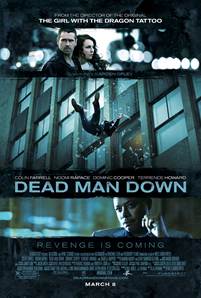 We all know who Fabolous is.  He has had quite an impressive career for over a decade now, since we first heard him featured on one of my personal favorite tracks, Lil Mo’s “Superwoman”.  Now he has branched off into the world of acting, starring in the upcoming film “Dead Man Down”. Dead Man Down is an action thriller that stars Colin Farrell and Noomi Rapace as two strangers whose mutual desire for revenge draws them together and triggers an escalating trail of mayhem.  His hit song “Breathe” is featured in the TV spot for the movie, which is due out March 8th.  Check out the clip here.

Now Fab wants you to be apart of the movie experience by entering his “Dead Man Down Remix Revenge Ultimate Diss Contest”. All you have to do is tell Fab your tale about how you were betrayed, and if chosen he will turn it into a rap song that will be performed on BET’s “106th and Park”.  Translation here, your pain will be turned into a diss track by a Grammy nominated performer.  How freaking exciting is that?

Here is what you do- log onto Complex‘s website and it will further give you details on how to enter.  You have from now until February 15th, so get that story of yours out there and turn it into a nationwide hit, courtesy of Fab.

Here is Fab talking about the contest.  Good luck to all the people who enter!