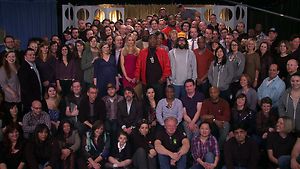 Last night marked the series finale of 30 Rock after seven long seasons, and the show ended as it lived: full of rapid-fire humor, Tracy Jordan’s antics, Jack Donaghy’s classic manipulative tricks, and Liz Lemon being as neurotic and frantic as possible.

The first half of this double header finale revolved around Jack Donaghy’s quest for happiness and Liz adjusting to being a stay at home mom. Neither goes particularly well as Liz immediately starts a fight on a moms only message board (with an anonymous poster that happens to be her husband nonetheless), while Jack goes off to formulaically fill out a pie chart with various things that are “supposed” to make him happy (such as faith, hiring a guy off the street to co-anchor for today, and a threesome with Nancy Donovan and Elisa. Despite filling in his happiness pie chart entirely, after reaching a number of goals (including an angry screed by Nancy Pelosi), Jack feels more disappointed than ever and leaves the job that he worked his entire life to get. Conversely, Liz and Criss come to realization that Liz would make the better breadwinner of the couple and Liz goes off to find a new writing gig. This ultimately leads to Liz and Jack getting into the most tumultuous argument in the seven year run of the show after Liz feels betrayed by the fact that Jack made her “want more” (in terms of dreams, expectations, and generally not settling).

Tracy and Jenna on the other hand, formed the backbone of the show’s two B-plots. Jenna attempts to adjust to the show’s cancellation by throwing Jenna-style tantrums but cannot cope with the fact that absolutely no one is listening to her. As a result she tries TV (only to be forced to play roles like corpses) and movies (only to find everyone in Los Angeles is younger and prettier than her). Tracy meanwhile is upset that Kenneth is not around to do him a favor as he used to in his positions of both page (and janitor), leading to a heartwarming moment where he “releases” Kenneth from his entourage.

The second half of the show revolves around a major plot development that occurs in the first half with Liz having to put up one final show of TGS in order to fulfill a contract obligation to Tracy Jordan. However, a monkey is thrown in a wrench when Tracy runs away in order to ensure the show never happens, unknowing of a hefty penalty in his contract that would be owed to him if the show does not reach the 150 episode milestone. As a result, Liz has to chase him down in order to shoot the final episode. Liz ultimately finds Tracy in a strip club, where Tracy is running from the show in order to avoid having to say goodbye.

Meanwhile Jack is trying to patch up with Liz after the tumultuous argument that occurred at the end of the first part of the show. This ultimately leads to Jack hitting rock bottom and various cast members wondering if Jack was looking to off himself. However, this turns into Jack’s final manipulative game, as Liz finds him boarding a boat to find his true bliss, only for it to turn into the shortest boat trip of anyone’s life after deciding to push a “see-through dishwasher”.

The show’s final C-plot involves Frank and Toofer trying to get Lutz to move off of Blimpie’s when he got to choose the writers’ final lunch. Nothing however will work to make Lutz not pick Blimpie’s as he chosen it for revenge after all of the hell the other writers have given him over the past seven years (until Liz, who is tyrannical about food throws Lutz in her office tells Cerie to order sushi and dessert). However, Lutz takes the ultimate of measures to ensure that the writers’ will eat Blimpie’s, come hell or high water.

The finale as a whole impressed, often juggling four plot lines through both halves of the show, with neither section feeling particularly crowded, and giving every cast member a proper send off, be it Jonathan finally screaming at Liz how Jack was all his, Pete’s attempt at faking his death, and Tracy’s father finally returning from buying that pack of cigarettes. This comes as no surprise, however, as 30 Rock has done an excellent job this entire season of wrapping up lingering plot arcs, whether it’s Kenneth’s final rise to the presidency of NBC (a long term callback to a remark Jack mentioned in which he stated that “Kenneth will be running this company in five years”), Jack’s final realization that despite her salty interior, his mother was really caring for him the entire time, or Liz’s adoption arc that mysteriously fell off the face of the earth somewhere in the middle of season three.

The (in this case, absolute) final verdict: 30 Rock went out with the sort of ending that a show of it’s caliber deserved. Despite the massive changes that many of the major characters had over the course of the show, it took lengths to prove that it’s central characters (Jack, Liz, Kenneth, Tracy, and Jenna) were still at their core the people that they were at the start of the show. As has been the case all season, the show managed to neatly tie up a number of unresolved loose plot lines, whether it’s Jack’s unresolved love life or the Liz Lemon adoption arc that disappeared from consciousness over the past couple of seasons. A terrific sendoff (and the first of many this season for NBC’s Thursday night lineup) for a show that was fearlessly frenetic and funny.