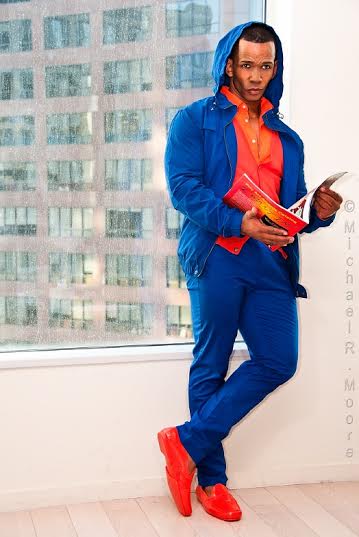 Lancelot Theobold Jr has made quite the name for himself in so many different arenas of what it is to be a professional.  He is an accomplished choreographer, actor and fitness impresario with a great workout he has developed called Ab-Solute Fusion.  On top of that, he also recently choreographed the movie “On Top Of The Pyramid” as well as acted as part of the Soho Film Festival.  So clearly this guy has a lot going for him which is why I wanted to sit down with him and learn more.

Lance discusses how he got into all of this in the first place, his thoughts on living a healthier lifestyle, acting, choreographing and what he sees for his hopeful future.  Take a look.

Hi Lance!  So it seems like you are a good juxtaposition of theater and exercise.  What drew you into both fields in the first place?

Well I was an athlete all my life and enjoyed the preparation for the game as much as playing the game itself. Once football was over I tried owning my own sporting apparel company and had success but was not happy or should I say feeling fulfilled the way I felt when I was an athlete. I met a guy name Richard Willis Jr who introduced me to theatre as a producer first and the theatre was just the spark and excitement I was looking for.

Tell me about how you started the concept of the Ab-Solute-Fusion Workout?

After becoming a producer and then executive producer of theatre I realized that I wanted to be in front of the camera as well. Through contacts I was lucky enough to receive a full dance scholarship at Bernice Johnsons Dance School in Queens NY. I started studying Ballet, Jazz, Modern, Tap and African for the next four years. I began to realize that dancers were tremendous athletes who had great control of their body, explosive power, tremendous balance coordination and a self-awareness of the mechanics of how their body moved. Football, basketball, lacrosse players etc. all need explosive power, balance and coordination as well but most athletes don’t have that self awareness of body mechanics and why they’re able to perform the way they do. The definition of AB-SOLUTE-FUSION is the complete synthesis of dance and athletic training.

Our goal is three fold: To create self-awareness of Body mechanics, strengthen and stretch the components of the body that will produce explosive power, better balance, and coordination while at the same time getting your mind and body into great shape.

How does one people incorporate the Ab-Solute-Fusion Workout into their own daily routine?

If your in Long Island NY you can take class every Saturday morning 10:30 at 340 Wheatley Plaza at Gravity In Motion or Tuesdays 7:30 at Valencia Gym in Elmont, Long Island or you can go to my website www.absolutefusionworkout.com read about it, see video on it or go to my Youtube channel for beginner exercises or go to my Facebook page where I post exercises on a weekly bases you’ll find all that on my website.

What do you think is most people’s Achilles Heel when it comes to not only losing weight but also staying the course and keeping it off?

I think each person’s situation is different but I do know that consistency is the key. Its to easy for people to make excuses on why they can’t and when your surrounded by negativity or people in your circle who are not interested in loosing weight and being healthy it makes it that much easier to quit. It’s not an excuse but it is reality. I watched my mom try diets for years and lose and gain it back. It wasn’t until 7 years ago after a lifetime of fighting she’s finally lost over a 120 pounds and has been able to keep it off. I asked her what was different and she said she just one day made up her mind and believed she could do it and said she watched my sister and I stay in shape consistently for years and it just motivates her not to give up.

Outside of the workout, what do you recommend people do to maintain a healthy diet?

I’m not a dietician but I do know diets are temporary. It’s about a life style change. Eat smaller portions stay away from the sodas and high sugar beverages and treat yourself once week. You can experiment with all kinds of health meals make its all about discovering and learning something new experiencing something different by doing the research, if you want to succeed bad enough you’ll create your new life style.

I heard about your big theater performance in NYC.  Can you tell me more about it?

I’m apart of an incredible theatre company called Open End Repertory Theatre, we performed May 20th as a part of the SoHo Film Festival. We’re a company that is dedicated to the preservation of classic American playwrights and new living playwrights work and we add non-traditional diverse multi-ethnic casting in the mix. Our goal is to bring to life the vision of the playwrights past and present. It was an entertaining evening of one-act plays from an extraordinary group of accomplished actors who have been together for a decade.

.You also choreographed the movie “At The Top Of The Pyramid”.  What was that experience like?

It was an incredible experience to be the lead choreographer and responsible for choreographing over ten scenes in the movie with different types of choreography. I was so grateful to the executive producers for giving me this opportunity especially cause this was my first feature film I choreographed. I enjoyed watching how a movie is shot and just the teamwork and execution and preparation that goes on behind the scenes. When you see the end result on the screen and know what it really took to get it to that point it can bring tears to your eyes the first time you go through it.

Anything else coming up of interest to our readers?

June 19th I’m receiving the national honor of being awarded the 2015 People of Distinction Humanitarian award at the City University Graduated Center in Midtown, New York. In July I go on tour with Hip-Hop Dance Boot Camp. I travel around the country teaching the many different styles of hip hop dance. www.hip-hopdancebootcamp.com. Looking forward to going into production with a Mozell Entertainment project in the fall.