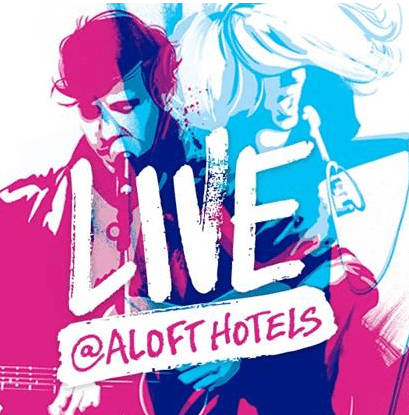 What is better than 100 straight days of some of the best music out there today?  How about a chance to win a free night at one of the best hotels in the New York City area?  You heard that right, famed hotel chain Aloft is opening up its 100th Hotel and is celebrating it in a big way- by kicking off 100 days of music with Rock & Roll heavyweights Better Than Ezra this coming Tuesday at their location in the heart of Brooklyn at 216 Duffield Street.  The show starts at 7pm.

Better Than Ezra is a band that has been around for more than 20 years now, spurring chart topping hits like “Good” from their debut album “Deluxe” as well as other big time hits such as “In The Blood”, “Desperately Wanting” and “King Of Now Orleans” which all fared very well on the rock charts and stations at the time.  They are back with their first album in more than five years called “All Together Now” which was just released on September 9th.  This album finds Better Than Ezra collaborating Grammy nominated producer Tony Hoffer, who has worked with the likes of legends from Beck to Depeche Mode just to name a few.  Should be a big performance to help Aloft Hotels celebrate their 100th hotel and the kickoff of 100 nights of music.

Now all of my readers have a chance to get in on the fun.  Hit up [email protected] to enter into a contest for a free night at the Aloft Hotels and a chance to meet Better Than Ezra!  I will email the winner on Tuesday morning!  Good luck to everyone!  More information about Aloft Hotels on their official website.  For all of you Manhattanites or visiting soon there are locations not only in Brooklyn but also in Harlem on Fredrick Douglass Blvd.  Definitely a great place to stay if you are in the area!