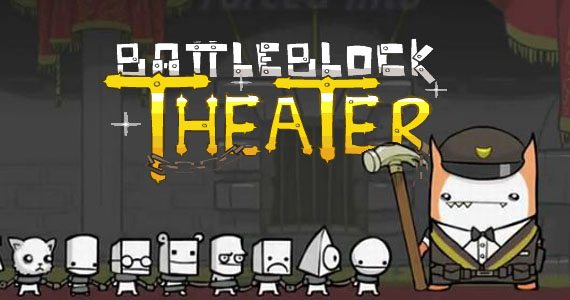 Released on April 3rd, The Behemoth’s BattleBlock Theater is a game that fuses platforming and puzzle gameplay to create an experience that is full of fun trial and error sequences and delightfully challenging, precision jumps. If you’re familiar with either of their previous efforts, Alien Hominid or Castle Crashers, then the zany story and graphics of BattleBlock Theater won’t come as much of a shock to you. You play as one of many “prisoners” who was shipwrecked on an island and taken captive by technologically-advanced cats. The game’s all-around good guy, Hatty Hattington, has been brainwashed by the feline enemies and forced to run their theater, which showcases the prisoners attempting to make their way through the various levels of the game. Each level comes with different flavors of enemies, death traps, puzzle elements, and power-ups. There are cats who will try to punch you into the water (hint: you can’t swim), spike traps, teleporters, and much more within each stage.

Progression through the game is simple enough; you must collect three of the gems that are strewn about the level and then find the exit. Most levels (called acts) in the game have seven gems to collect, and your grade at the end of an act is largely dependent on how many gems you finish with. There are a good amount of gems that can be collected simply by progressing through a given act, but the remainder of them are either hidden or require skilled puzzle solving or jumping to obtain. You can also improve your grade by finding the hidden ball of yarn in each act and/or completing the act quickly. Unrelated to the grade system is the golden hat that will occasionally appear. Finding the golden hat and then completing the act with it in your possession yields ten gems for you to spend. Dying with the hat will cause you to lose it, sometimes for good.

Perhaps the best part of the game is the narrator, who not only provides the backdrop for the game’s story through hilarious cutscenes, but also both commends and heckles your performance as you go along. His witty lines and critiques never get old, and there’s a one-liner for just about everything you do. One death will yield a shocked comment like “Oh my goodness gracious!”, while the next could be met with “That was pretty funny.” Thankfully, there are no lives to lose in the game, so you have as long as you want to try every possible solution and die every possible way before advancing.

The controls in BattleBlock Theater are as tight as you’ll find in any platformer. I never felt like I would miss a jump because of my character sliding off an edge. The characters really stick their landings well, and the ability to slightly change direction in mid-air allows for true precision jumps; which is perfect, because you need to be accurate to complete each chapter’s finale and encore acts. These stages are quite challenging and unlike the normal adventures in the game, you’re on a timer. Failing to complete the act in time kicks you back to the level select.

The amount of customization in BattleBlock Theater is nearly endless. Characters are divided into five categories, by the shape of their head (sphere, cube, pyramid, cylinder, and star, which contains bonus unlockables). New faces for the heads are unlocked by collecting gems and spending them in the Gift Shop. There are some truly wild faces to choose from in the game, such as Elvis, an eyeball, a house, a devil, and an elephant. You can also earn weapons for your character, which range from an exploding frisbee to a vacuum and many more, though only one may be used at a time. Weapons are purchased in the Gift Shop using balls of yarn. You can also pick one of nine colors for your character, which will help you tell yours apart from a friend’s if you happen to be playing the game’s co-op mode. Better yet, you can customize your character while in the middle of a level, should you want to change weapons or faces.

BattleBlock Theater isn’t short on multiplayer versus modes, either. Eight different gametypes await you, each with more than a handful of different layouts to enjoy them on. Soul Snatcher, Muckle, Challenge, King Of The Hill, Color The World, Grab The Gold, Ball Game, and Capture The Horse. All of them offer different styles of gameplay and are sure to entertain for hours on end. These modes can also be played online against other users in ranked or quick matches. The online play is smooth, with little to no latency detracting from the mechanics.

Another awesome feature about this game is the ability to create your own levels to wreak havoc on. I personally am no good at this sort of thing, but given the creations that more creative people have been coming up with in games like Halo 4 and Minecraft, I’m sure that BattleBlock Theater will have a lot of nice content for users to throw down with.

With tons of unlockables, a nice assortment of game modes, and a story mode with enough meat to it for any gamer to be entertained for more than a few hours, BattleBlock Theater really hits the mark. This is one of the few titles that I have no complaints with, and at only 1200 Microsoft Points, this game is an absolute steal. You’re getting about $40-50 worth of game for $15. I’ll take that every time. I’m very happy to award BattleBlock Theater an A. Nice work, Behemoth.