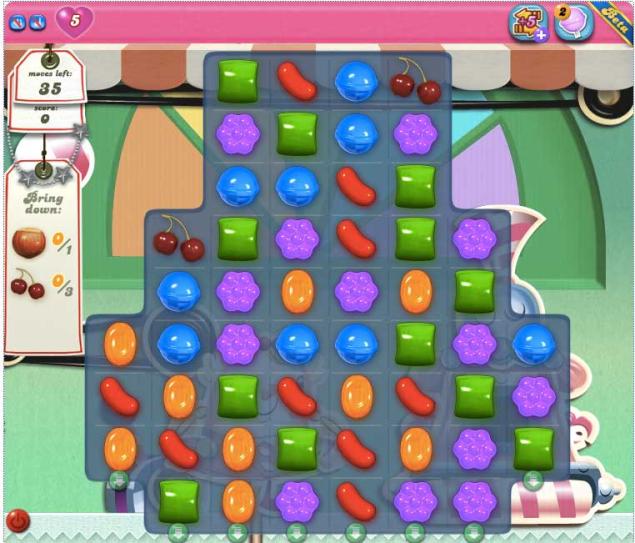 It seems that the hot mobile game right now is Candy Crush Saga by King. The game is free to download on the App Store and Android Market. A few of my co-workers play it, talk about how they’re at such and such level with three stars on all previous boards, so I thought I should try it out. No harm in a free game, right?

If you’ve ever played any of the Bejeweled games, you should know what to expect here. Candy Crush Saga is your typical “match three” puzzle game that has become so overdone that I wonder why anyone still bothers to make them. The one added twist in this game is that each level comes with a specific goal or challenge that you must meet to proceed. So far I’ve encountered three of these: obtain a certain score, clear the “jelly” off the board by making matches inside of it, and move ingredients to the bottom of the board. Unless stated otherwise, all of these challenges must be completed in a set number of moves (some of them have a time limit instead). Sounds simple enough, but once you dive a little deeper in, the evil of this game truly rears its ugly head.

You start your journey into… wherever you are (the game has an attempt at a story that quite frankly I don’t understand at all) with five lives. Every time you fail to complete a level, you lose a life. Run out of lives, and it’s sort of a game over. You have three options once you are out of lives. You can:

A) Wait out a timer that will give you one life per cycle. Usually the wait isn’t too bad, the most I’ve had to endure is 20 minutes per life.
B) Send some of your Facebook friends a request for them to give you lives. I’m not sure how this works; since I hate getting game requests on Facebook I feel bad burdening my friends with them.
C) Instantly buy five lives for $0.99.

See the bold? There’s where the satisfaction of getting a game for free ends. The game is only free if you have lots of patience and don’t mind harassing your friends on Facebook. In fact, there are a good number of microtransactions in Candy Crush Saga that are almost as infuriating as the game’s surprisingly steep difficulty. Failed a level and want more moves? 99 cents. Need lives and don’t have the patience to wait out the clock or your friends? 99 cents. Want a power-up? 99 cents. Want a permanent boost to the number of lives you can have at any given time? How does $16.99 move you? There’s another permanent power-up that will cost you a whopping $39.99 to get your hands on. I don’t know about you, but $16.99 to give myself three more chances to pass a stupidly difficult level before inevitably buying more lives is nothing short of diabolical.

Indeed, there is a business model in place here and it’s so devilish that I’m almost proud of King for coming up with it. In effect, the game preys on the human race’s need for instant gratification, as well as the lack of willpower and the want for “one more try” at something we feel we can conquer. Candy Crush Saga will take your money without you even realizing it. I’ve probably spent about $10 on the game already just buying more lives, because the game’s frustratingly hard levels are a challenge that I want to beat badly enough.

When generating new blocks, the game does you no favors.  At least in Bejeweled, you stand a pretty good chance of getting the gems you need to either begin or continue combos, no matter how far into the game you are. In Candy Crush Saga, it almost seems like the game is seeking to screw you just to get more money out of you once you lose and rage. One of my aforementioned co-workers told me that she’s been stuck on level 50 for weeks now, which I haven’t gotten to yet. I completed level 35 a little while ago, and for my efforts I was greeted with a prompt that asked me to either invite Facebook friends or pay $0.99 just to keep going through the game. To be quite honest, I find this appalling. In a way it isn’t false advertising, because technically the game is still free, but if I’m going to be putting a game on my phone, I want the full game. I don’t want to jump through hoops (or worse yet, pay) just to unlock content that is in the package I got from the App Store. A great example of how to make a game that includes microtransactions but doesn’t try to force them on you is Angry Birds. Mobile game developers should really take some cues from Rovio, maybe then consumers would be happier with the products out there right now.

All that said, the game is still fun and addicting, which are the two qualities that puzzle games are required to have in order to be considered worthy of playing. I can’t consider Candy Crush Saga to be a bad game, because it simply isn’t; it takes the “match three” formula of puzzle games that everyone is familiar with and adds objectives that are sensible and enjoyable. I cannot, however, forgive the exploitative business model at work here. There’s no getting around the fact that this a free game designed to take your money little by little until you wonder where $20+ went. If you don’t have willpower or patience, stay far, far away from this one. I give Candy Crush Saga a C+.