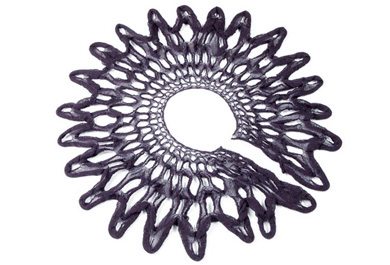 Diana Eng is an American Fashion designer who gained popularity on the second season of the hit show Project Runway.  Unfortunately, Diana was eliminated on the sixth episode, The “Nicky Hilton Party Dress” episode.  Although she did not make it to the winner’s circle on Project Runway, her talent and ingenious designs have certainly won the attention of fashion lovers and nerds alike.

Diana Eng is best known for her innovative and technological designs, yes I said technological.  Diana says she like to, “look at technology, math and science and how to integrate it into fashion designs.”  Diana Eng has surely brought technology into the fashion world with her thermochromic scarves.  Thermochromic you ask?  Scarves that change color and design according to the weather!  She has designed a scarf that when the temperature is below 64 degrees snowflakes begin to appear, and as the temperature decreases, say below 38 degrees, the size of the snowflakes increase and the pattern slowly engulfs the scarf.  It is truly magical to watch and one of a kind.  Below is a video from CNN’s The Next List and shows the science of the scarf.

I just checked out Diana Eng’s website and I am officially obsessed!  She has some amazing items featured.  You must check out her website!

Below are a few of the items that really sparked my interest.

The above Lady Bug pin is featured on CNN’s The Next List’s Blog.

The Fibonacci Scarf utilizes the famous math formula known as the “Fibonacci Sequence.”  Basically the sequence involves adding the next number to the previous.  For example, 1, 1, 2, 3, 5, 8, 13, 21,…  The Fibonacci sequence occurs in nature and Diana Eng used the sequence to knit this impeccable scarf.

Diana Eng is the definition of a unique designer.  Her mix of fashion and science are remarkable.  In a field where being inventive and forward are keys to being successful, Diana Eng undoubtedly brings something original to the fashion world.  Personally, I look forward to watching her career develop and am fascinated to see what new technologically ground-breaking designs she will come up with next.  CNN is going to be featuring Diana Eng on their show The Next List this Sunday at 2:30pm.  I’ve caught this show a few times and admire the way CNN features a new innovator or idea each week.  The subjects of the show are not always well known but definitely deserve to be.  You can also check out their blog if you happen to miss an episode.