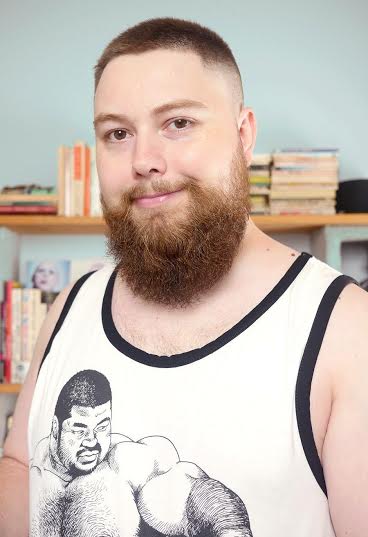 I happen to love when people enjoy what they do for a living, because they had a passion for it at some point and they took that passion and made it a full time thing.  I have done that with this publication, and I can truthfully say the same for the very creative, dashing and smart Graham Kolbeins, who is currently the creative director at MASSIVE and Editor at Gay Manga.

Graham sat down with Manhattan Digest this week to discuss what Manga really is, how he got into the business in the first place, his appearance on “Sex On”, struggles for LGBT businesses to find their way into mainstream, future plans, and more.  Check it out.

So for people who don’t really know, what exactly is Manga, and is gay separate from the word?

Manga is a term for comics created in Japan. Translating to “whimsical drawings,” it was originally used in the 18th and 19th century to refer to impromptu drawings and sketches. Manga as we know it today developed during the U.S. Occupation of Japan after 1945. Osamu Tezuka’s seminal 1952 manga Astro Boy helped usher in the explosive popularity of the manga medium, which has in the past six decades evolved into a multi-billion dollar publishing industry. Even though the publishing industry in Japan (like publishing industry elsewhere) is in decline, an avalanche of new manga is being published every month at a rate that makes American comics seem like a cottage industry. A variety of main genres exist within the manga medium including seinen (comics for adults), shonen (comics for boys), shojo (comics for girls), and the sub-genre shonen-ai (boys’ love or “yaoi”– comics for girls who like reading male-male love stories). gei komi (Gay manga– comics written by gay men) is a relatively niche genre in Japan. For the past three decades, gay magazines have almost exclusively been the platform this type of manga. Because gay magazines don’t typically appear on traditional newsstands, gay manga has been mostly sold in specialty gay shops, below the radar of mainstream manga readers.

How does this differentiate from anime in the first place?

Anime just means animation, and outside of Japan the term refers mainly to Japanese animation. So far there have been no animated adaptations of gay manga. I hope it will happen, though! Gengoroh Tagame, one of the artists we collaborate with at MASSIVE, has written several long-form manga works including the 900-page historical epic Shirogane no Hana (The Silver Flower). I’d personally love to see that manga adapted into an anime series, but the financing and interest just isn’t there yet.

So you had a clear yearning to be in the arts, and usually when people get into any field they have inspirations that get them to that point.  Who were yours?

I look up to so many artists across all forms of art, it’s hard to narrow them down! I will say that one of the immense privileges and pleasures of working for MASSIVE is working alongside some of the artists who inspire me most. Stumbling upon the artwork of Gengoroh Tagame, Jiraiya, and Seizoh Ebisubashi when I was in high school completely changed the way I conceived of gay identity and provided innumerable positive images of my sexuality that I had been sorely lacking. I always saw them as heroes who lived half a world away, so I never imagined I’d actually meet them. A decade later, no one had done the work of publishing their work in North America and I decided to try and make it happen myself. That led me to meeting Anne Ishii (my partner at MASSIVE) and graphic design genius Chip Kidd, with whom I co-edited the gay manga anthologies The Passion of Gengoroh Tagame and Massive. Now I’m working with some of my idols on a daily basis and have to keep pinching myself to make sure it’s real!

So I can see in a lot of the shirts that you design and designs in general for MASSIVE that the Japanese men are husky and muscular ala Bear/Huskular.  Have you always designed your characters that way?

I’m not a character designer myself– I can barely draw a stick figure– but I design the clothes with artwork by Japanese manga artists. So far we’ve been working mainly with artists who have an interest in larger-bodied, masculine-presenting men. Gay manga artists’ tastes are all over the map: some draw characters with more traditionally handsome, muscular looks, and other veer towards the svelte, androgynous bishonen (beautiful boys) of yaoi. It’s the bigger, bearish figures– sometimes called gachimuchi (muscle-chubby)– that really call out to me, personally. Artistic representations of larger men are so rare and the technical skill of these artists is so high that these representations mean a lot to me as someone who desires larger men. It’s also so rare in American culture to see representations of bigger Asian men, so I think that’s been part of the appeal for us– challenging cultural expectations of what an Asian male body can be.

Do you find that the LGBT audience still struggles to get their material to be mainstream overall in this world?

Adding onto that, are you surprised at the amount of people who have a vested interest in this sort of thing?

I think when we released The Passion of Gengoroh Tagame and our first MASSIVE T-shirts in 2013, we weren’t really expecting the huge crowds of dedicated fans that turned out to meet Tagame in Toronto and New York. That really opened our eyes to how many people have been thirsting for these artists’ work in North America and how varied the audience can be. There’s that really solid core audience, and I feel like the clothes have helped bring in new audiences, people who had never heard of gay manga but just fall in love with the artwork immediately. When MASSIVE started collaborating with Opening Ceremony last year, that really blew it up and expanded the audience into the mainstream fashion world in an incredible way. It makes me happy when I meet straight people who can appreciate the artwork beyond sexuality and proudly wear these beautiful hunky Jiraiya pin-ups on their chests.

I discovered you and Manga on the HBO series “Sex On”.  How did that process come about and what has been the experience post airing?

What is going on for the rest of 2015 regarding Gay Manga and MASSIVE?

We’re excited to launch MASSIVE’s Holiday collection this week, featuring collaborations with the great restaurant Mission Chinese Food and new media artist Terrell Davis, who made an amazing 3D collage with Jiraiya’s artwork. The new collection also sees the long-awaited return of Jiraiya’s “Best Couple” sweatshirt, one of our most requested garments since it went out of stock last year. The Best Couple is an original illustration of Jiraiya’s ideal couple, a pair of hulking dudes with comparable BMI who love taking drives down dusty country roads in their Jeep. Though it hasn’t been announced officially, we also have a collaboration with swimwear brand Pretty Snake coming out very soon!

As far as the gay manga genre itself, German publisher Bruno Gmunder has been releasing a steady stream of English-language books from a variety of gay manga artists (many of them translated by Anne Ishii), and you can look forward to even more publications from them in 2016!

In closing, what are you hopeful for regarding both of their futures?

I want to see more acclaim for these amazing gay manga artists, there are dozens of incredible creators out there who deserve to have their work recognized and distributed widely. We’ve only scratched the surface of the genre. At the same time, I’m hoping MASSIVE can expand beyond gay male content and work with more manga artists from across the LGBTQ spectrum and beyond. We’re currently working with the artist Rokudenashiko, who was arrested by the Tokyo Metropolitan Police twice last year for making vagina art (including, infamously, a 3D-printed vagina kayak). She’s brazenly taking on the system right now, challenging her obscenity charges in court. Keep an eye out for Rokudenashiko’s manga memoir, What Is Obscenity? The book is produced by MASSIVE and will be published in May 2016 by Koyama Press.