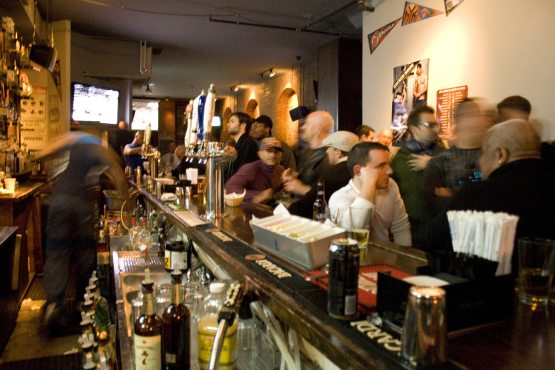 As it has been nine years now since I started going to gay bars back in the day in Providence, I have seen my fair share of quite frankly everything one can see for themselves.  When you live in a city like Manhattan, the gay bars are plentiful and designed for a certain type of atmosphere or look.  Each and every guy you see in there has a purpose of being there.  There are the ones who just got off of work and are there for happy hour and a drink.  There are ones who go to the special leather nights and want to find a guy who either has a strap on their right or left arm (if you get that analogy, congratulations).  There are ones who go with a group and are social just for the fact of being social.  Then there are the elusive ones who are brave enough to go out there on their own and try to find someone.  Be it a conversation, a boyfriend or a one night stand, we have all been there in terms of what we want to get out of it.  So if you are that striking, handsome chap who happens to find themselves at the local gay bar in Chelsea, here are a couple of things you can do in order to make sure that at the end of the night you leave with a smile on your face (and pants hopefully).

Approaching someone who is alone-

This is really the best case-scenario as their is no blockage in the way (groups, annoying girls who show up with them, etc).  There are really good ways to gauge how you can approach something like this.  If you happen to be standing next to them, or across the bar, make sure that you know they are attracted.  How? Usually, if a guy looks up at you a handful of times and stares/smiles, it’s a go.  If they do that and are not moving from the position they are in, generally they want you to come over and say hello. After a handful of smiles, go over and say hello.  Figure out a topic of conversation outside of the “You are cute, so are you” and go with it.  That way, you have found someone of interest and hopefully will have a good night.  These situations require bravery in that you don’t want to keep looking at each other and not do anything about it.  Someone else might approach or a friend shows up late and they get there, and you lose your chance.  Carpe Diem- seize the moment.

This is one of the more trickier ones, especially if you are there by yourself.  Let’s start by making this easier- you are with a friend or two.  There are so many scenarios here.  In a city like New York, so many people know each other.  One good way is if you or your friend happen to know one of the guys in the other group, that way making social interaction is easy and you can go from there.  What if that doesn’t happen? There are ways around it without making it awkward, but if you are in a sports bar generally you can strike up a conversation about who they are rooting for and what they think about the game.  If the other group aren’t dickish, they will respond and generate a good conversation.  If you happen to be alone and see a guy in a group that you want to talk to, I would advise not.  They are there with a group to have a good time and usually will not look for anything more than that.  BUT, if they happen to be in a twosome or threesome, wait for their friend to leave to get a drink and then jump in.  It may not lead to the best case scenario in that other guy might be their date or not interested, but it always helps to go in for the kill.  You never know.

Getting the guys number-

So in those two scenarios, you have made it to the conversation.  Whatever you are talking about, you are getting the feeling the guy is interested.  Here are some good motives to getting that number and securing date number one.  One- try to be witty and cute.  Say something like, “So I’m cute, you are cute, let’s go on a date and be cute together”.  That way, he laughs and knows that you are interested in going on a date without over doing it.  If the witty approach doesn’t work for you, it always works to just be blunt and say “Can I get your number’.  Some like that, some don’t.  There have been situations where a guy will give you a fake number, which is the worst because then you can really tell what you are doing is a waste of time.  Ask him “Here is my number, call me with yours so I can save it in my phone”.  Then you know the guy is for real.

These are just some fun, helpful tips to have a successful night at whatever bar you deemed appropriate to go to.  Good luck, and happy man hunting!