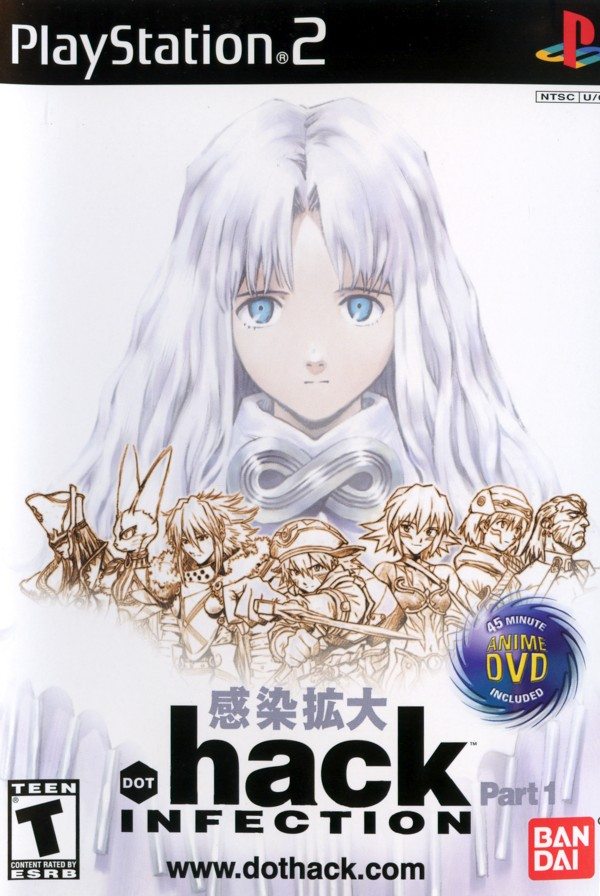 The PS2-era was saturated with RPGs of varying quality. We had Final Fantasy X, Final Fantasy XII, Kingdom Hearts (and its numerous remakes and spin-offs), Baldur’s Gate, Digimon, Grandia, Persona, Suikoden, and Xenosaga. Somewhat lost in all the big names of that generation was a little JRPG that could, and it was called .hack.

Describing the .hack games is difficult to do with words; it’s really better to become acquainted with them through playing. In a nutshell, the .hack games simulate an MMORPG, or “massively multiplayer online role-playing game”. There are multiple MMO elements present here: mounts, trading with other players, the ability to ask your party members to perform certain actions, and a short mail system for forming parties. In this simulated MMO called The World, anomalies in the game cause unforeseen effects on its players, most notably that some players become comatose as a result of playing the game.

It’s worth noting that there are actually two separate series of .hack games for the PS2. There is Project .hack, which refers to the first four games: Infection, Mutation, Outbreak, and Quarantine. These games tell the story of Kite, who on his very first adventure in The World watched in horror as his friend Orca was killed by a bugged monster and rendered comatose in the real world. After his traumatizing experience, the game follows Kite’s investigation into Orca’s demise and his experiences with other player-characters. The second series, known as G.U., consists of three games: Rebirth, Reminisce, and Redemption. G.U. chronicles the adventures of Haseo, who seeks revenge on the mysterious Tri-Edge for killing his friend Shino in-game and causing her to become comatose. Both sets of games rely heavily on their stories to hook players, but the gameplay is not to be overlooked.

When it comes to game mechanics and the like, if you enjoyed Kingdom Hearts, you’ll probably enjoy .hack‘s seven offerings. Fans of turn-based RPGs need not apply, as .hack is a real-time, action-based effort. However, the control afforded to players in .hack was unparalleled for its time. There are general commands that will tell your AI-controlled party members to use their skills, heal, only attack with magic or physically, or use an item to warp you out of a dungeon. That sort of control is nice enough, but then it goes far deeper. You can tell a particular teammate to attack a specific enemy and even dictate to them which skill or spell you want them to use. Ultimately, the system allows you to approach a battle in any number of ways and rarely are you shoehorned into using a single method to take out a monster.

The timeline of the .hack franchise actually begins with a novel, called Epitaph of Twilight. There are also a number of manga, anime, and OVA works in the series to seek out. As far as which of these you need to experience (in addition to the games) to get a better understanding of the universe, the two major anime series, .hack//SIGN and .hack//Roots, are required viewing. You really need to see both of them to get a better understanding of what’s going on in the games, but also because they’re quite entertaining, and this is coming from a guy who isn’t much for anime.

Without spoiling too much, each series of .hack games is full of twists and turns, new friends and enemies, and a noticeable rise in activity as the games progress. Even though each game takes only 15-20 hours to beat, there’s a lot to do; there are numerous side quests and optional adventures that will keep the series feeling fresh long enough to finish. The one problem this series has nowadays is the price point. Since the games have gotten hard to find in game stores, one must resort to the likes of Amazon and eBay, where prices have skyrocketed over the last few months. When I re-purchased .hack//Quarantine a few months back, it cost me $80, as it is the rarest of the seven existing titles. However, the other games all cost me less than their original price of $49.99 when they were released, so the price wound up being more than worth it.

I don’t think it’s much of a stretch to say that the Playstation 2 was the golden age of the RPG. With so many good ones out there, it’s tough to narrow your collection down to only a few; unless you’re rich, in which case more power to you. However, if you want a truly deep gameplay experience with an epic story, look no further than .hack to satisfy your needs.