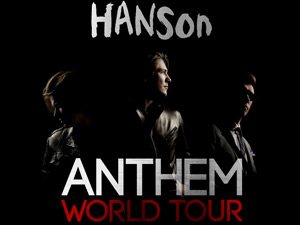 Ah, nostalgia.  You never know when it is going to happen or where it is coming from.  And last night, it hit me like a sack of bricks.  Taylor, Zach and Isaac Hanson, better known as, you know, Hanson, came to the Paramount Theater last night in Huntington as part of their “Hanson Anthem World Tour” in which Long Island (Huntington specifically) was one of the lucky spots.  Honestly, I originally went because a good friend of mine is a gigantic fan of theirs so I figured I would make her night and get us some seats and go.  The turnaround was that I left in just as good spirits as she did, and was pleasantly surprised at how phenomenal they were in person.

Hanson really exemplifies what isn’t around in the music industry anymore, which ultimately is home-bred talent.  They made an announcement during the concert last night that this marks their 20th year working together (which also made me feel elderly as two of them are around the same age as me) but it also made me realize how much of an accomplishment that is for a band to do itself.  There is a good population of people out there who for one don’t know who they are because they were popular in the late 90’s and two only see them as that band that did “MMMBop”.  Last night proved they were so much more than those near-sighted people and really gave quite a spectacular performance.

The opening performer of the night was Paul McDonald, who some might know for a couple of reasons.  One, he was a top 8 finalist on season 10 of American Idol and he is also married to “Twilight” hottie Nikki Reed.   Normally I don’t stick around for the opening act but he fit the bill completely and did great number after great number and I hope he breaks the American Idol curse per se of contestants who become a has been even though they are immensely talented.

Now, onto the main thrill of the night.  Hanson did really a great mix of old and new stuff.  The true fans knew all of the songs that they did whereas the former fairweathered fans (this guy here, now I am legit) knew the popular ones.  Each song was incredible in its own way.  They performed their new singles “Get The Girl Back” and “Been There Before” and also had some fantastic solo pieces from Zac (“Go”) and Isaac (“Love Song”) both of whom I have to say have cleaned up quite nicely since their long haired days in the late 90’s.  Of course, to my delight and happiness, they did some of their classics such as “Where’s The Love”, “This Time Around” and the pivotal track that earned them Grammy nominations and adoration from millions of fans, “MMMBop”.  The only song that was noticeably missing was my personal favorite song of theirs, “I Will Come To You”.  Sad face indeed.

Overall the concert was great and if invited I would definitely go and see them again.  Such a talented trio that I really hope sees the mainstream world again one day and ushers in a new generation of Hanson fans.