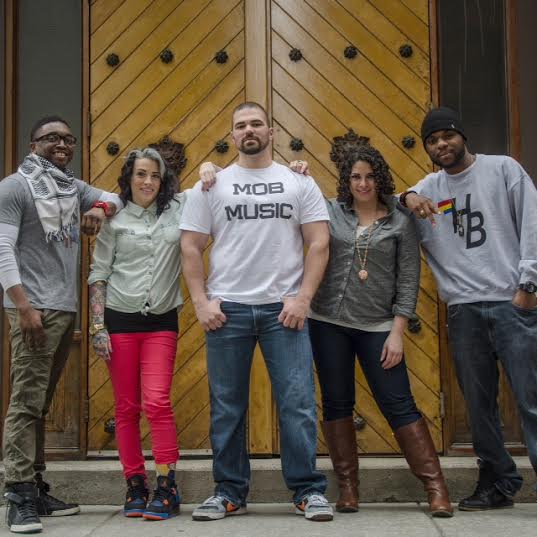 Sometimes in the most unconventional of settings you will meet some really great people and the further you get to know them and their passion makes you understand just how awesome they truly are. This can be said of jazz musician Mike Flanagan, who goes under the stage name MRF. I conveniently met him through some mutual friends at this year’s Bear Week in Provincetown, Massachusetts. On top of being a brutally handsome, charismatic and an all around great guy, I got to know him a little deeper and found out what a successful artist he has become in the jazz world.

In a short couple of years, MRF has accomplished things that many artists wouldn’t even dream about doing. He has independently released two albums, the most recent called “Mob Music”, which both have had a considerable amount of success since each of their inceptions. In a short twenty hour time frame, “Mob Music” became the highest-selling jazz album in the country on iTunes, sharing in the same company as jazz legends Miles Davis and Harry Connick Jr. Some of the singles off of that album, including “Trying” have remained in massive rotations on stations in and outside the US from Germany to Spain to name a few. On top of all of this, MRF has been able to work throughout the world with Grammy winners and nominees Esperanza Spaulding, Issa Pointer of The Pointer Sisters and Surefire Music Group. The Berklee College Of Music Graduate has also received rave reviews for his LGBT anthem “Be Strong (LGBT Youth)” as it was selected for the Flag Raising Anthem for Boston Pride last year. Quite a lot of accomplishments for a guy in such a short period of time.

The day before his big performance at Bear Week, I sat down with MRF to discuss his meteoric rise in the music industry, what and who inspires him, and what his music has meant to his fans and in particular the LGBT youth. Take a look.

So tell me how you got started in the music industry.

I graduated from the Berklee College of Music, and I wasn’t really sure which direction musically I wanted to go in. I had been playing a lot of jazz in and out of school, but I came out in my last year and it changed gears with what I was doing. I started writing my own stuff and collaborated with a singer who lives in New York, which is ultimately how my first album “Elevator Music” came to be. Once I started recording that, I ended up developing my own sound and own approach and knew exactly the direction I wanted to go in.

Jazz is such a unique part of the industry right now, so who would you say are your biggest inspirations?

I would say my number ones are D’Angelo and Lauryn Hill. That is the kind of stuff that I grew up on and it’s in me. Also, Meshell Ndegeocello is a good example. There are a whole bunch of jazz musicians and even country artists that I draw inspiration from in terms of their approach as well.

Many of my readers are unfamiliar with your work, so how would you describe your sound to them?

Its kind of a hybrid of R&B and Jazz. It also has a pop aesthetic to it as well because of the lyrics and forms of the songs. The music leaves a lot of room for my vocalists to interpret it in their own way, and for myself to stretch out on my instruments (saxophone, piano, etc) as well. The objective of my sophomore album, Mob Music, was to capture and document the magic of what we do on stage.

You are here enjoying Provincetown’s Bear Week, just as I am.  Is this your first Bear Week?

This is my seventh actually!

Oh wow!  This is my first time experiencing Bear Week in all of its glory, what would you say to convince people who are consistently on the fence about going to actually get them to go?

I really think it’s most important to figure out what Provincetown means to you, because it has so much to offer. It’s actually a great music town, and you can meet incredible people here. You can definitely go outside of the routine bear events that are going on and find something unique and different.  So I would definitely recommend coming to “Bear Week” as there is plenty to love about the experience.

You have a song called “Be Strong (LGBT Youth)” which is a very empowering LGBT anthem.  There isn’t a lot out there now that are like that, so tell me about the processing in recording this amazing song.

In 2010, when Asher Brown took his own life, and the epidemic of LGBT youth suicides made the media around that time, it made me insane. I started thinking about the work I was doing in my classroom by myself and how there are far too many kids without someone to turn to. Far too many kids that do not have an adult telling them that they are normal, and beautiful, and that they should love who they are. I felt I had to create something through music that could hopefully and potentially reach far beyond the classroom of students I was helping in my small corner of Boston. Originally, I wanted to name the song ‘Asher Brown’ but I was unsuccessful in getting in touch with his family to assure that was okay. So, “Be Strong”it was. That’s where the inspiration of the song came about.

Being an out musician yourself, do you find it to be a hindrance or a blessing to be so in the music industry?

I think everyone needs to come out. I hope everyone does. Sam Smith for example, love him. He is an incredible artist. He is in a position now where he can make a change, not saying he has to or wants to. He got rave reviews recently for his rendition of Whitney Houston’s “How Will I Know” but one thing that stood out to me was that he changed the pronoun“he”to “you”and instead of “there’s a boy I know”he says, “oh it’s you I know”to make the song entirely gender-neutral. I think most people didn’t think about that, however when I was doing my first album, I made a lot of my music gender-neutral in fear that there would backlash. It felt like I was regressing after working so hard to be who I am. I realized how important it was that I not do that on Mob Music. So, thought it may seem small, it’s a big step that fosters much needed change.

I love Joan Osbourne’s “What If God Was One Of Us”, so why did you choose to remake that on your latest album, “Mob Music”?

I started working with Lisa, Justin and Sheree in Boston, shortly after my first album was released. The first was singer Lisa Bello. Our styles have so much chemistry and when we come together, it really makes some incredible magic. We were raised similarly, share influences, and the way we approach music is similar as well. We started performing weekly in Boston at a place called “Club Cafe”every Thursday night. They were like, “What do you want to call the night?” and I was like, “Well, we are both Italian, so let’s call it Mob Music”. We loved it, and Mob Music just grew and grew. After our first month, singer Justin Waithe started coming on Thursdays and harmonized with Lisa. Then Sheree Dunwell filled in for Lisa while she was in LA and we she got back, the whole package of “Mob Music” was truly formed.

We would do popular songs and treat them like jazz standards, elevating them to the point where we took the audience on a journey every week! One of the songs we did was “One Of Us”and I knew that had to be the one cover on the ‘Mob Music’album.

On the “Mob Music” album, my favorite track is one called “This Love”.  What is your favorite on this album?

I love that song, but I would say that my favorite is “Trying”. “Trying” is the smooth jazz radio single on the record, and it is the most personal for me. I wrote that about a guy I was with, and that relationship ended right before I went into the studio to finish this record. We had two singles done at that point, and were heading in to track the rest of it. “Trying” was written right as that relationship was ending, and to this day remains my favorite.

OK, let’s do some fun questions so that my readers can see a different side of you.  If you had a dream concert, with two artists (dead or alive) that would never be on the same bill for ONE night only, who would it be?

The two on the same bill. Hmmm. I’m going to say D’Angelo and The Dixie Chicks. I’m a huge Dixie Chicks fan. I saw both live within a year’s time, and both were incredible. D’Angelo’s show had such an energy to. Knowing his entire catalog, I was dancing my ass off the entire time. When I saw The Dixie Chicks, my friends and I were lucky enough to stand right under Natalie Maines, and she was winking and smiling at us the whole time. Just great experiences for both.

Got it!  So you are stuck on an island with a CD player but it only has one song in it.  What do you want that song to be?

“Who Knew” by P!nk. It is my favorite song of all time. Everything about it, from her voice to the lyrics to the melody. The song is somewhat ambiguous, and even though it is a song about her losing a friend to an overdose I believe, it’s able to be interpreted in a lot of different ways. After my first relationship ended, I would come down here to Ptown and it was playing everywhere. So the song itself, my love for her, and the connection to PTown and gay life sort of culminates in why this truly is my favorite song.

You go to a 90’s dance party.  Which phase do you hope they play?

What do you have going on for the future?

So, I already have a third album planned. I want to continue to make music with the group I have right now. I’m hoping to go back into the studio in September in Orleans here in Mass. It will be similar to the second album however this one will be more saxophone driven. A challenge for me is the human voice. It’s something I love on others but hate my own. I’ve heard Me’Shell and Lenny Kravitz are like that too. I am tempted to get over that fear I guess and use it and see if I can come up with something that I am okay with releasing. I don’t know if it will be on this album, but sometime in the future it is something I definitely want to accomplish.