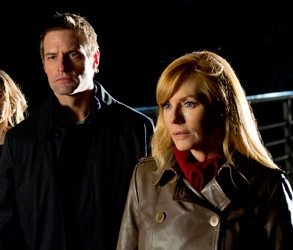 Intelligence: Mondays at 10 Eastern on CBS

Is there a network that gets more out of the procedural perpetual motion machine than CBS? For what has been seemingly close to fifteen years, the network has been able to pump out a never-ending string of crime dramas from JAG to CSI and NCIS (and their respective spin-offs) to Elementary. At times, it seems like every non Good Wife or Person of Interest drama is about either policemen, detectives, or a little bit of both columns. So needless to say, when CBS has a hole to plug in their drama lineup, they know where to go, a decision that leads to more shows like tonight’s new offering.

Intelligence is about a Gabriel (Josh Holloway), a high level government operative who has a microchip planted in his head that allows him to function as a living computer, putting access to large amounts of data right at his fingertips. This information is used by Gabriel and federal government in order to protect the country from all sorts of cyber crime. Gabriel doesn’t have to go it alone however, getting aid from his director Lillian Strand (Marg Helgenberger), a secret service agent Riley Neal (Meghan Ory), and Dr. Shenandoah Cassidy (John Billingsley) who started to program to help him.

This show, much like last week’s Killer Women and Chicago PD is built around it’s action, but unlike the other two shows mentioned, it’s action scenes are built on a base of levity, whether it’s Gabriel making his escape from an Indian military base or a gun battle that trails through a black-lighted paintball venue. The camera work is hit and miss, with the cyber-rendering effects looking pretty cool (and somewhat reminiscent of Will Graham’s investigation sequences in Hannibal), but the shows tendency to quick pan through some of the action sequences can turn disorienting.

My real complaints tend to be with the writing. While Intelligence works as a interesting case-of-the-week show, it’s underlying story and characterization seem to lack depth. This is particularly egregious in the case of some of the most prominent characters: Lillian tends to get written as a stock boss reduced to stock platitudes about how they save lives while Riley’s character feels completely undefinable. Even our most central character only seems to use his gift to dote on his ex-wife, which along with his rule-breaking seem to be Gabriel’s sole character traits.

The acting as a whole is pretty solid, even if the parts aren’t insanely meaty. I appreciate in particular John Billingsley’s work as Dr. Cassidy, as he maintains enough tough guy cred in the second episode that he earned in the pilot, while also being forced to handle the comic relief scene throughout Red-X. Marg Helgenberger and Josh Holloway also deserve commendation for holding their own in spite of the mediocre material, with Holloway in particular being a strong fit for the shows numerous action scenes.

The Final Verdict: After two episodes, I’m still not entirely sure what to think about Intelligence. In the pilot, we had a lighter, less moody show that clicked and was pretty enjoyable. However, the follow up felt lacking, being much heavier and not showing any real character progression past the first episode (closing twist excluded). That being said, it seems like the sort of show that makes for more than acceptable mindless viewing, so my recommendation is to check this out, particularly if you’re into procedurals.