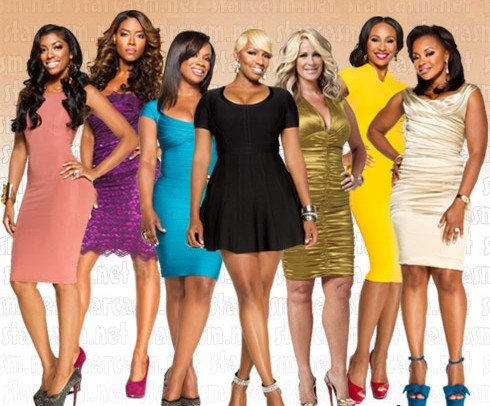 As an avid Real Housewives of Atlanta fan (and other seasons at that), this season was different in several ways yet it still brought home that punch at this particular venue does so well.  Now that Kim Zolciak has departed this year, the lone original housewive in NeNe Leakes continues to be the one that everyone watches for when it comes to her no nonsense tolerance of stupidity and her overall hilarity that comes with being her.  Besides her, there are two new housewives that were introduced in the mix, and boy did they deliver.  One more than the other though.  Kenya Moore made herself pretty comfortable in the RHOA franchise this year, coming in like a bullet from episode one when judging on a Jet Magazine contest to the finale last night when attempting to kick out other new housewife Porsha Stewart out for coming in a different costume (yes, that happened).  Regardless, this was the best season of RHOA in a very long time and I am going to breakdown each housewife and my thoughts on them this season.

NeNe is truly the best part of this show, and in many people’s eyes the best housewife to ever exist on any of the series.  Her vivaciousness and tenacity to get her career where it needs to be has been truly shown this season, in particular her always being bi-coastal in LA and Atlanta.  She is finally a series regular on the NBC show “The New Normal” and that was documented in full this year.  Also profiled heavily was her reconciliation with her ex husband Greg which culminated in him proposing to her in last weeks episode (Aww).  My personal opinion is that they should’ve never gotten divorced in the first place, as to me it just seemed like she was so career driven that she wanted her independence and that was a main focal point in her leaving.  Nevertheless, NeNe had words with every cast member this season except for Kandi (her former nemesis) and Cynthia.  She read every other girl correctly this year, from Porsha having a controlling husband to Kenya getting way out of line with everyone for no reason.  As for her relationship with Kim, that is one that will truly never flourish and be what it was supposed to be- as a modern day boughetto version of Thelma & Louise. Facts are this- NeNe is water to that shows livelihood. That franchise can’t survive without it.  So keep coming back NeNe because we love you!

In my opinion, Kandi is the most successful when it comes to being a true business woman.  Her storyline this year was falling in love with her boo Todd Tucker and the road to engagement and potentially a new baby in the works.  She is one of two of the RHOA housewives that are getting a spin off, her’s being “The Kandi Factory” in which she discovers new talent to work professionally in the music industry (pumped for that).  Kandi and NeNe are in the same realm in that they both really keep it 100 everywhere they go.  Kandi did a very good job in the drama department by sticking with Phaedra during the whole battle with Kenya and finally settling the stupid beef between her and NeNe when they were on vacation.  A true businesswoman, she continues to be the pioneer in female sex toys with her “Bedroom Kandi” line that earned her the Best Toy Sex Line at the 2012 AVN’s.  The joke here that I love is when she said “I think I am the only person to win a Grammy and an AVN”.  Really for me, Kandi is the shit and should’ve been an original housewife in season one as opposed to the woman she replaced, DeShawn (boring).  She continues to breakaway from being just a girl from a 90’s girl group and really make herself a force to be reckoned with in the business world.  Good for her.

Cynthia’s will be short and sweet.  The renewal of vows with Peter in Anguilla was nice.  Her continuing her Bailey Model Agency was fun to watch as well.  Her standing her ground when Kenya was acting a hot ass mess at her agency was great as well.  Besides that, Cynthia remains to me an anomaly on that show.  She isn’t that interesting but somehow continues a third season on the show.  I was sort of shocked they kept her around and not that insane nut job Marlo Hampton.  She does read well though.  The funniest thing this season for me is when she asks Kenya- “Now Kenya, were you before or after Vanessa Williams”.  HA. Love it.

Ugh.  There are times where I like Phaedra, and there are times where she annoys the heck out of me.  Regardless, her colorful commentary keeps me cracking up, especially her digs at onetime friend Kenya.  That seemed to be her main focal point this season as well, was her ongoing battle with Ms. Moore.  The battle began really when Phaedra didn’t want to cough up any money to pay Kenya for all the work she put into Phaedra’s workout video.  I side with Kenya here, as regardless of friendship you should pay for something like that. That is when the flood gates opened and pretty much at every event something happened between the two of them.  They seemed to squash things in the end, but besides that fight was there anything really interesting about Phaedra this season? Her going into the funeral business for pets bored the heck out of me and her relationship with her fine as heck husband Apollo bored me as well.  With baby number two on the way, is there anything left for this woman to be a vital structure when season six happens? Stay tuned.

Or as I like to call her, the Alexis Bellino of RHOA.  Meaning the girl says some dumb shit.  Porsha is a bubbly fun girl who has some great family history that was documented at the beginning of the season (she is family members with Hosea Williams).  That being said, the girl just proved why she is a real housewife this season by being married to a very controlling husband, AKA that closet case Kordell Stewart.  Now he has filed for divorce from her and it is getting ugly.  Really ugly.  I am sure the way he was portrayed on the show didn’t really hit well with him on the home front hence why he is leaving her, but was there anything else that could’ve attributed to it? There were some great and genuine moments such as Porsha revealing her problems trying to conceive and her devotion to charity work, but really all that relationship was was Kordell telling Porsha what to do in every situation.  She was another one that got into it so many times with Kenya, and originally I was on Porsha’s side, but as the season went on and all she had to throw digs on was her age really just showed how immature Porsha was.  Now with the divorce riding high, she is sure to be a cast member for next season, but will they portray her as the newly single Carrie Bradshaw of Atlanta? Time will tell.

I love Kenya Moore. I really, really do.  I have had this girl’s back from the get go pretty much and there are so many aspects about her that I find to just be freaking fantastic.  This show needed someone like her, and I understood why she did what she did.  The only thing I disagreed with was how rough she was in the first episode when judging the Jet Beauty Pageant thing at Cynthia’s agency.  Besides that, girl can stand up for herself.  Phaedra was wrong in not paying her, you don’t do stuff for free.  Porsha, miss “265 Days A Year” was wrong as well with her below the belt jokes that made Kenya seem to be this old woman when really she is the best looking girl of the bunch (and most physically fit).  Did she overreact about Walter? No.  If my friends kept inviting my ex to places and they knew it made me uncomfortable, well then they aren’t really friends to begin with? Kenya really did a great job at getting her point across and looking back on things I really get where she was coming from.  “Gone With The Wind Fabulous” is truly the best quote of the season and a mantra I use in my everyday life.  She is a beautiful and smart addition to the show and I can’t wait to see where it leads next season.

What are your thoughts RHOA fans? Did you like this season? What are your views on the ladies? Can’t wait for the reunion next week!