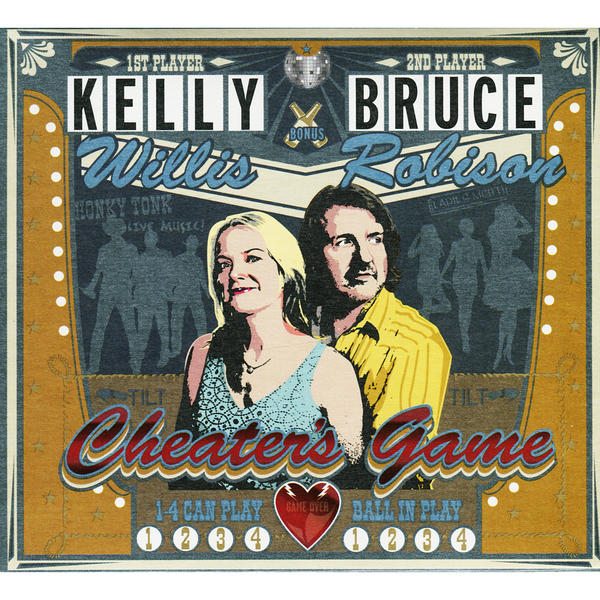 Don’t let the adolescent 1970’s album art fool you; Cheater’s Game has an accomplished, new, grown up sound. The married couple of about 16 years has decided to come together and collaborate on this album, consisting of both original and cover tracks. The album wasn’t written because they were cheating, so don’t worry this country power couple is still as strong as ever before. But the songs do carry a cheating and loving theme, so haters beware.

Both Robison & Willis have collaborated on tracks before, but this is their first full album together after taking their own journey as a solo artist. Cheater’s Game still manages to show off the talents of both individuals, while flourishing as a duo too. Vocally, they sing solo and together, some tracks are split 50/50 while others not as equal, but it appears that this may be the intention.

For example, “Border Radio” is performed equally by Robison & Willis. It discusses a woman who is alone because her man hasn’t come back around. It is implied through the lyrics that the track is neither about Robison or Willis, but rather about another women. Robison takes the lead on “Lifeline”, told from his point of view, and discusses how his life has turned for the worse and that negativity seems to follow him, “Stuck here cursing your name, Last in line first in flames”. The only portion where Willis supports him (both vocally and emotionally) is the chorus, pleading “Send me a lifeline, little bit of hope.” A track where Willis takes the lead is “9,999,999 Tears”, it may sound musically uplifting but it is awfully depressing as the title suggests. Don’t get me wrong though, it’s a great track (a cover of Dickey Lee’s original) but it’s downright sad. She sings “Sun didn’t shine this morning’ it’s been rainin’ the whole day through, suddenly without warning, you found someone new.” The portion where Willis joins her is during the chorus, where his accompaniment practically validates & promotes that she has “Got nine million, nine hundred ninety nine thousand, nine hundred ninety nine tears to go, and then I don’t know if I’ll be over you.”

Aside from the lyrically symbolic talents, the album is full of good tunes. “But I do” is a fast paced song which surprised me with its use of brass starting between the chorus and verse, filling in the hole that the typically would be by the bass. Their harmonies during “Ordinary Fool” project sadness through their vocals and lyrics, providing myself (and surely others as well) with an optimal listening experience. During “Born to Roll” they musically achieve the feeling of driving in a car down a highway. Even without knowing the lyrics, the intention of the music alludes to this. They wistfully sing through track after track without overdoing it or becoming too showy.

Regardless if the track is an original or a cover, each song in it’s own way can be a hit. What must be taken into consideration though is that the album is not electronically heavy. No electric guitar, electric bass, or weird vocal assisting devices. The talent is derived from the lyrics, the acoustical instruments and the vocals. What lacks in electrics is made up otherwise. Robison and Willis not only make a successful marriage, but make a country power couple and album. Who says married couples can’t work together was dead wrong on this one.