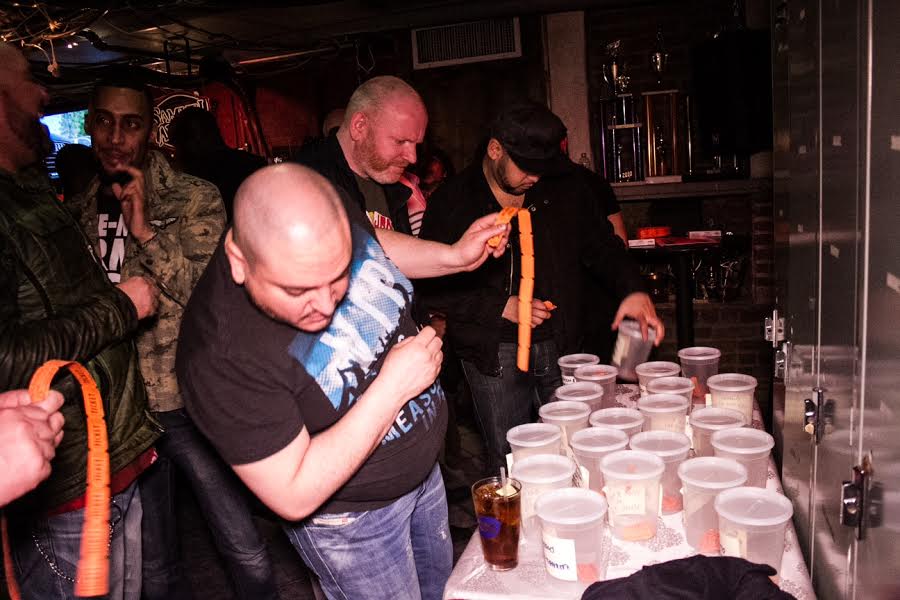 This past Saturday night, Manhattan Digest held its first fundraiser at the best gay bar in New York City- Gym Sportsbar in Chelsea.  The event itself was held from 7-9 PM in the basement part of Gymbar, and included great giveaways like T-Shirts, Dog Tags and Trial Memberships from Scruff App.  The room was packed throughout with not only friends of mine and fans of the website but a ton of great people who came down and got in on the bidding action & donating for a great cause.  A month of hard work, promotion, donations and all of that paid off and the event was a huge success not only for the website but for raising money for cancer research and patient care.

A big thank you to the following people and organizations as they helped tremendously to make the night a big success.  Rick Schmutzler, co-owner of Gym Sportsbar, for letting us have the event at your fabulous establishment and Serge Sturbois for being a fantastic and amicable bartender throughout the night and helping all of our participants out with a smile.  Thank you to my best friend in the world Nixon Saget who stepped it up ten fold and worked the front desk, encouraged people to donate and helped collect the donations throughout the two hours.  You are an amazing guy and friend and I really do appreciate what you did.  Thirdly, my buddy (and amazing photographer) Steve Alb for his amazing photography he took throughout the night.  Definitely give him a shout for your next event you are having, worth it!

I would also love to thank the following companies and organizations who generously donated an item(s) for people to bid on.  We raised hundreds of dollars for this event with more coming in the next couple of days, and the general response from the people who showed up for the event was gleeful & excitement when they saw what they could bid on for a good cause-

Upstairs at The Kimberly Hotel

We will be doing another fundraiser hopefully in the next month or two, with more fab prizes you can bid on for another great cause… to be determined!  Thanks again to everyone who came and participated!! 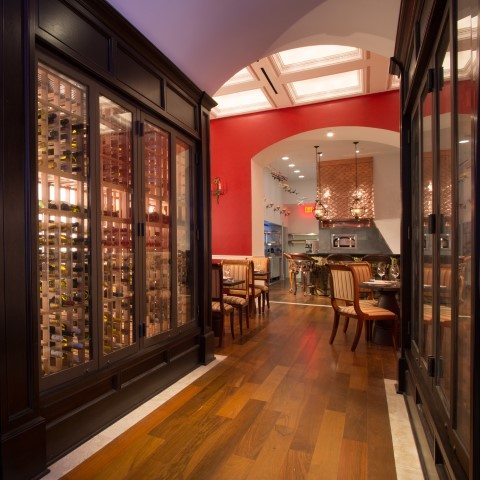 Sometimes two really is better than one.  And make no exception, these two restaurants fit that bill and then some.  I recently had a fantastic stay at The Kimberly Hotel, located on East 50th between 3rd and Lexington.  While I was there, I became aware of two great restaurants with very different cuisines at each.  Bistango, located directly to the left of the hotel, is the best in Modern Italian cooking, whereas Ibis, to the right, dabbles and dazzles in Mediterranean. During my stay at The Kimberly I was delighted to experience both first hand, and they were top notch when it came to decor, quality, service and of course taste.  Check out my review of both.

Upon entry to Bistango, you get a warm and inviting sense from its environment, in particular the way the decor is set up.  The color of red is splashed throughout, and mixing that with the beautiful decor and wooden floors elevates this particular restaurant to an entirely different level.  The staff was incredibly knowledgeable and accommodating to say the least, and for a restaurant that is very new to the NYC food scene, I would say they have a great shot of being a huge success going forward in 2015 and beyond.

As previously mentioned, they excel in all things Italian.  While I dined there, I was able to try some exceptional meals from beginning to end, and I would recommend trying these out and then some.  If you are at an Italian place, it is somewhat necessary to try out their Meatballs.  The ones they have on their appetizer menu which is traditionally called their “Meatballs Al Forno” and it comes with a zesty tomato sauce and parmesan.  Great way to start the meal off.  Another starter that I would recommend is going into the Flatbread route as they have nine different & very unique selections, all different from each other.  if I had to choose I would recommend the Agnello, sort of a Greek flatbread that comes with Braised Lamb, Feta, Lemon and Long Peppers.  All flavors really burst in your mouth and is another shining example of why Bistango is so great.

For their entrees, I would stick with a traditional Italian dish and head towards the pasta route.  The one I highly recommend is the Fettucine with Lobster, Octopus and a Marscarpone-Marinara.  As someone who has never had Octopus before I thought it was quite scrumptious and was cooked properly as I never really got that rubbery taste that Octopus can bring.  If you enjoy a good mix of meat with your pasta I would recommend the Rigatoni with Short Rib and Salsa Verde Rustico.  Good combination of flavors and the short rib was cooked to perfection.  After such a hearty meal, you can finish light or go quite the opposite by trying their delectable desserts like Olive Oil Ice Cream with a caramel gelee or their creamy and delicious Tiramisu.  Overall, 10/10 in my book.

Ibis is a stark contrast compared to how Bistango looks.  It is quite large in its space and has a theatrical vibe upon arrival, something that would’ve been popular back in the 50’s and 60’s.  Upon further investigation i found out that Ibis actually used to be an opera house back in the 1920’s where legends like Lucille Ball would come and perform.  Honestly, when you are in the same building as someone as legendary as that, you get the sense that this place is doing it right.  This location has gone through its changes over the past century, however Ibis looks like its doing the overall scheme of things as a job well done with its food and atmosphere.  I love how dark and beautifully colored the walls and decor is, and they also have a great upstairs portion where you can host a party or gathering with your friends and family.  Quite grand indeed if I do say so myself.

The food itself was quite majestic as well, all with a Mediterranean theme.  If we start in the appetizer category, try the Calamari as it is fresh with a great crunch.  You can’t avoid Hummus when you are at a place like this, and they do not disappoint. The chickpea, sesame sauce, garlic and lemon juice really compliment each other and go well when you are dipping the fresh bread into the Hummus itself.  Another two items worth dipping something into is the Smoked Eggplant pureed with garlic & olive oil and the Artichoke Heart with carrots, potatoes and green peas.  Definitely a great way to start your meal off.

For the main courses, a Dry-Aged New York Steak is something one should never say no to.  They cooked it to perfection and complimented it with some tasty mashed potatoes and flavorful Asparagus.  My friend opted to go the fish route and try the Branzino served with an Arugala salad.  Lighter, fresh and overall tasted great.  Once again, another 10/10 experience.

For more information on Ibis, Bistango and The Kimberly Hotel, check out their official sites below.  If you are ever in Midtown east I would highly recommend trying them out! 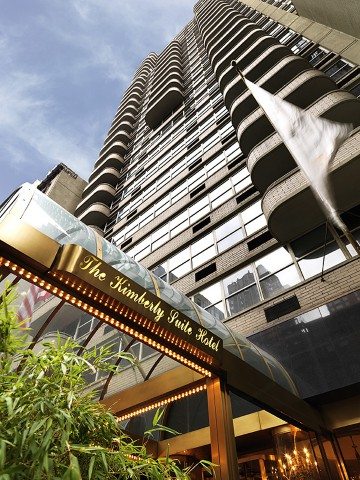 When it comes to your hotel stay in Manhattan, several ones simply just don’t go the extra mile when it comes to providing more than just a bed and free Wifi for their guests.  When and if you are staying in a city like Manhattan, you want it to be a memorable one for more than just that.  So when I heard about the fabulous offerings that The Kimberly Hotel was providing, I knew I had to learn more about it.  The Kimberly Hotel is a European-style boutique hotel, offering gracious hospitality, timeless elegance and a renowned location in the heart of midtown’s fashionable East Side. A member of WORLDHOTELS Deluxe Collection, the Kimberly Hotel offers 192 spacious guestrooms including luxurious one and two-bedroom suites highlighted by private balconies and wet bars.

The one fantastic thing that is worth noting about The Kimberly Hotel is that you really don’t have to leave it to have an amazing night.  I mean, you are in New York City so naturally you will want to go out and experience all that this city has to offer, but in this situation I would beg to differ.  The Kimberly Hotel has not one, not two, but three different types of entertainment amenities right on their premises.  In the mood for some delicious food?  They have you covered.  You can check out the best in Mediterranean cuisine at Ibis, which is located directly to the right of the main location.  Not in the mood for Mediterranean and want to go a different route?  Definitely try out their Italian counterpart and brand new restaurant called Bistango located directly to the left.  Want a chilled, relaxed environment with great music and cocktails?  Try ‘Upstairs,’ the 3,000 square-foot rooftop bar offering spectacular 360-degree views of Manhattan.  I was able to review all three (Ibis & Bistango will come in a later review.  A delicious review mind you).

The suites at The Kimberly Hotel are majestic and grand, with beautiful colors throughout.  The bed itself has got to be the comfiest bed I have ever stayed in, and the amenities in the room itself were quite spectacular.  The balcony overlooked some of the best of New York City, and the overall room experience I have to say was a 10/10 in my book.  If you are a single person checking in or with a group, this particular hotel has you covered when it comes to the size of the suite they have prepared for you, on top of the fabulous customer service they provide.  Truly had a wonderful time.

With the warmer weather hopefully coming soon (Snow this weekend! No!) many New Yorkers are set to be spending more time outside with friends and family to experience this city in the heat most of us have been waiting for.  Something that is great about The Kimberly Hotel’s lounge Upstairs is that it has dual functionality when it comes to its look.  In the situation above, the cover that is usually up is taken down and customers can experience the warm summer breeze with some of the best top shelf drinks that the city can provide.  It also offers a 360 degree angle of Manhattan, and the sights from Upstairs are quite breathtaking and spectacular if I must say so myself.  It is a very chill vibe as I stated previously, and the perfect place for your next assortment of parties you are having as Upstairs itself is spacious and large.  Definitely an amazing add on to an already fabulous location.

I’m not the only one that thinks The Kimberly Hotel is pretty freaking awesome.  Check out some of the awards they have won in recent years-

When top publications like Conde Nast and Expedia are referencing you as the best, you have something great going on.  Some other things to mention about The Kimberly Hotel is that they include newly designed meeting and private event spaces, an on-site fitness center, and complimentary access to New York Health & Racquet Club’s fitness facilities and seasonal private yacht sails further to heighten the guest experience.  So when you have all of this under one roof, why bother staying anywhere else?

Want to know even more information about The Kimberly Hotel?  Check out their official site.