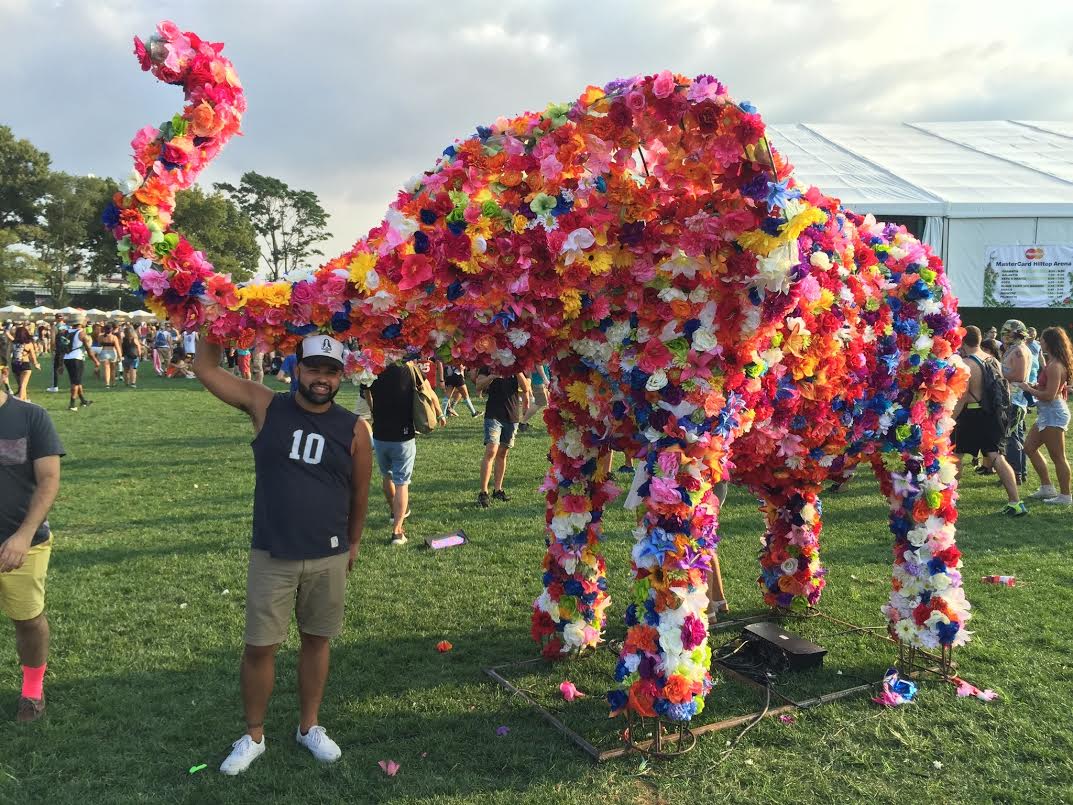 My first encounter with the Electric Zoo Festival was on opening night of the three day electronic music festival- Friday, September 4, 2015. The theme of this year’s zoo was “Transformation” and they really did need a transformation after the backlash the festival received from the last two years after reports of multiple drug overdoses, including one death, and last year’s shut down on day 3 because, contrary to popular belief, the cause was lightning storms, not drug use.   This year saw an increase in overall security- in the crowds, by the bars, by the portable toilets, and especially at the front gate.

I was greeted by friendly people wearing their best smiles and their bright pink T-mobile shirts, one of this year’s festival sponsors.  Immediately after the friendly T-Mobile smiles came the search dogs and the legion of security guards at 2 checkpoints.   We stood in line for a good 15 minutes while dogs were forced to walk around us. After the awkward drug sniffing police dogs, came the harassing TSA–like pat-downs. A security guard asked if I had drugs and I responded “Nope, no drugs on me.” Then again with his finger in the air, security said “I’ll give you 1 last chance. Do you have any drugs?” This time I was more annoyed and said in a pointed tone “Do I look like I have any drugs on me!?”  He gave a half frown and rolled his eyes while he patted me down and let me go.  From that point on, the “Transformation” began.

We walked to the MasterCard hut (another sponsor of this year’s Electric Zoo) picked up VIP wristbands, and went straight into the hilltop arena where MasterCard holders had a VIP stage overlooking the entire arena with our own bar.  The MasterCard Hilltop Arena provided the best performances I saw the entire festival.

We started with Snails, a DJ from the Skrillex label OWSLA.  Snails’ set placed the performance level bar so high that the rest of the day we were looking for someone with even more energy to beat his performance.  One highlight from the Snails set was when the crowd exploded into fist-pumping cheers at his Backstreet Boys remix of “Everybody”. Snails manipulated the bass hook in the original song into a 2015 dance-floor ready dubstep anthem, unquestionably one of his specialties.

After the high energy of Snails, we were ready for a drink. The Electric Zoo Festival creators were smart to make wrist bands with RFID chips that hold money which you load at specific huts marked in the festival.  This year’s festival saw even more food vendors, including taco trucks and Jamaican patties (yum!).  However, to buy anything you MUST exchange your US Dollars for EZ Bucks (EZB) at an exchange rate of $2.22 USD for 1 EZB.  At that rate a 16 ounce can of beer costs 4.5 EZB (or $10 USD), and the tacos cost 2.5 EZB ($5.50 each). The high cost of food and drinks at music festivals is not anything new, but to the average drunk-twenty-something a taco worth 2.5 EZB looks more pleasing to the eye than a small taco for $5.5.  A very tricky, and very smart way of making us spend more money at the festival, not to mention it was fun to wave my wrist in front of the machine to pay for my food and drinks.  I might have to invest in one of those Apple Watches soon…

Festival highlights from the main stage included eclectic afternoon sets from Don Diablo, Slander, Audien, and the hyper-exciting high-energy 3LAU. These DJs mixed and mangled, twisted and re-tuned familiar popular music with new electronic drops, including original songs, which literally made all of our hearts jump with excitement and obviously faces melted.

Back in the Hilltop Arena, Keys N Krates left people in awe after their jaw dropping live trap music performance on stage with drums and synth/keyboard.  Keys N Krates is definitely a band worth catching live if you ever have the chance.  The Galantis set came right after Keys N Krates.

The one and only performance which stood out from the rest on opening night was the popular Swedish production duo Galantis.  The group, famous for their hit singles Runaway (U & I), You, and Peanut Butter Jelly, is comprised of Christian “Bloodshy” Karlsson and Linus Eklow aka Style of Eye.  Bloodshy is famous for his Grammy winning hits with artists like Britney Spears, JLo, Katy Perry, Kylie Minogue and Madonna. And his partner, Style of Eye, co-wrote Icona Pop’s “I Love It” ft. Charlie XCX. We stood under the hot sun, in the 80 degree tent, with crowds overflowing outside of the tent (a venue too small for the duo), when the lights went down and Galantis came out to the biggest crowd the MasterCard Hilltop Arena saw all weekend. We were lucky enough to beat the crowds to get on the VIP deck and watch the action unfold before our eyes.  Thirty minutes into the performance we were all dripping with sweat, and soaked!  The thousands of people under the tent jumped around, danced, and watched as the Swedish duo’s performance included a pair of drum high-hats for each of them to bang on while they themselves jumped up and down and off of their turn tables.  Their music transitions were less seamless and more like a pre-selected playlist strung together with awkward modulations between the sets. The awkward modulations weren’t too obvious, but enough for me to mention and for a group who will probably make even bigger hits in the future, I’m curious to see how their live sets transform after this small and intimate performance at Electric Zoo.

Most people will argue that EDM festivals are all the same and won’t matter who is on stage (because they all play the same music), but I am here to say those people are all wrong.  If they’ve been to the Electric Zoo Festival – Transformed they would have seen that not all DJs are one in the same.  Big-name, multi-day festivals around the world offer bigger stages and bigger crowds, while Electric Zoo focused on the smaller names, which allowed smaller stages, and in turn brought out smaller crowds. At the end of the day what every single festival does right is bring the right audience. Everyone shows excitement, dresses to impress, and shows the utmost respect for each other. The morning after opening night the intense sense of FOMO kicks in, and you absolutely must go back and experience day 2, and 3 just so you can say you saw it all. I can’t wait for the next festival.

For more info on Electric Zoo Festival, check out the official site.