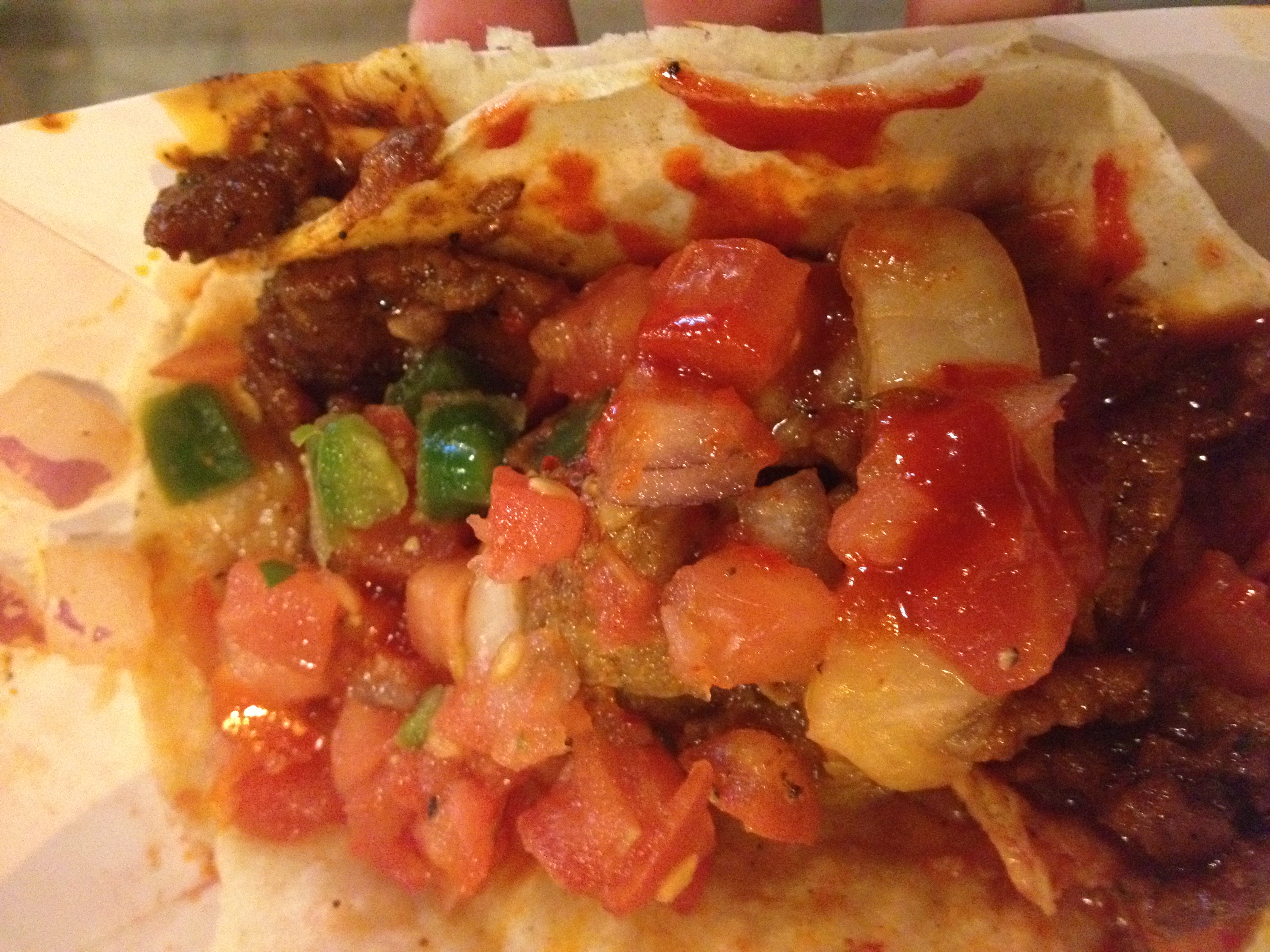 New York City’s Food and Wine Festival took place this weekend. Every event has its highs and lows and as did the Meatpacking Uncorked presented by Cupcake Vineyards. This was one of the few events that was affordable for the average Jo who wants to swim with the big food fishies.

Twenty-two food vendors and thirty-two wine stops filled NYC from West 16th to Horatio street between 9th and 10th Avenue. Now if your thinking where exactly, then you and I are on the same page. I found myself constantly needing to find a seat to look at the map, my maps app and the food and wine key found in the materials you received from the welcome center. Thank god for wearing flats…ladies I hope you wore the same if not, I recommend ice and sipping on that vino you picked up somewhere along the way. Of the twenty two food vendors I was able to hit ten of them; Bagatelle, GOBurger Truck, Gorilla Cheese NYC, Korilla BBQ, Luke’s Lobster, Macelleria, Mac Truck NYC, Old Traditional Polish Cuisine, Rouge Tomate’s Cart in the Park and STK Meatpacking. Of the ten vendors I truly enjoyed 5, found two to be okay, and three I would not eat again. My top 5 included Bagatelle, Luke’s Lobster, Macelleria, Mac Truck NYC and STK Meatpacking.

Bagatelle’s Tuna Tartar was delicious. It was perfectly spiced with the lime juice bringing the whole spoon together and the taro chips to add the right texture to the succulent bite. The only issue with the spoon (aside from there not being more) was that the beautiful tuna was cut in advance and had started to oxidize and give that grey color…good thing it was dark out. Regardless this was still my favorite bite of the night, again too bad it was just a bite.

Luke’s Lobster served deliciously sweet shrimp roll on buttery toasted half hot dog rolls. Your traditional sweet shrimp roll was served quickly and eaten easily while listening to the blues grass quartet play on the city street. They did not let the experience part of the evening get away from them. It was one of the more enjoyable stops of the night.

Macelleria served a delicious Polenta Crostini with Bolognese Ragu and Pecorino Toscano. The Polenta was nicely salted and seasoned and served as a nice vesicle for the Bolognese Ragu, expect someone must have forgotten to order the forks for the event or really scere off the Polenta because it fell apart when you picked up the solidified cornmeal cup. The serving looked whimsically like a piece of bone with the marrow ready for your to suck it out. The Bolognese Ragu was also very nicely seasoned and had that fresh from grandma’s stove feel to it; warming me from the inside. But, I did not get to enjoy the Pecorino Toscano as advertised. Not I’m not sure if it was just too little to be noted or if my tray did not get that hit of cheese before leaving the busy kitchen.

Mac Truck NYC; what can I say about Braised Beef Short Ribs served over mac and cheese. Except for maybe, “More, Please!” The mac was al dente and creamy and would be missing a serious amount of salt; except for the incredibly tender and rich short rib that was on top. I was ready to turn in for the night, if someone was to give me a vat of that, I would high tailed it home to cuddle up on the with a deep zinfandel and just manja! It would have been very had to get anything to-go, since they ran out of food early.

STK Meatpacking provided such a nicely seasoned and sceared hanger steak with a outstanding earthy mushroom puree. The only problem I had was with the size of the piece of steak. I wish it was cut down further so that I could really sop up all of that mushroom puree with the steak in a couple of bites. Instead I enjoyed that one big juice bite with as much of the puree I could get in there while still trying to save face and not completely embarrass myself. (Which I think I would have if I started licking that plate) Not for the not so great news; Old Traditional Polish Cuisine and Rouge Tomate’s Cart in the Park. Old Traditional Polish Cuisine; Well, i’m a Russian Polish woman, I have eaten my fair share of traditional perogi, and I left here a bit disappointed. I was lucky enough to not have to choose between the meat and cheese preparations; but I could have skipped the meat one all together. The question I have is, well, what type of meat did I just eat. That’s not what I want to wonder about. The meat was dry and had lots of other flavors or onions and spices, but I just could not get past how dry the filling was. The dough for both of the perogi’s was very good. A little greasy, but all and all the was a nice texture and feel to the wrappings. The cheese perogi was very good; rich and creamy, just greasier than I would have wanted.

Rouge Tomate’s Cart in the Park disappointed me. I love their restaurant, I love their summer time cart by central park, I love how the treat and respect the food. The problem here was not with the chefs if was with the way the Squash Soup was handled. Despite the speed in which people were able to get through the line at their food truck stop; the soup was too cold to taste the flavors that were really in there. I am almost positive that if they were able to keep the heat on the soup much closer to serving it the soup would have been delightful. Instead it was very one noted by the time the not at all steaming cup got to my mouth. This was the ONLY one stop along the way where water was provided. You had a choice of water and or iced coffee, which I greatly appreciated.

Now for the stops that did not fare so well; Korilla BBQ, GO Burger and Gorilla Cheese NYC. Now it might be surprising to see Korilla BBQ on this end of my list. But they are here for one reason and one reason alone. I am allergic to RAW red onions. So whenever I go somewhere where red onions are a main part of the cuisine (Mexican, Thai, etc) I always ask, “Does this contain any RED ONIONS?” I was told no. And thankfully waited to get onto the next line to eat this dish (where there was light), because the first thing I saw were diced red onion. I went as far to ask about their salsa and if that had any red onions. The answer was no, but what they really meant was yes. We have red onions layered throughout the dish. I handed my dish off to the ladies in line with me and they were happy to have the food. But as far as I am concerned, you put my health at risk. I do not appreciate that, and I believe it is a big problem in the food industry. Chefs, waiters and management need to work together to make sure that people with food allergies, intolerances and other pathologies do not have to fear eating; they should be able to enjoy food nearly just as much as anyone else.

GO Burger NYC was just way, way, way to dry to enjoy. They said the burger was going to be dry BLT Dry Aged Beef Sliders. They would have benefited from serving water. But I did not see anything resembling a BLT, as in no bacon, no lettuce and no tomato was provided. I enjoy dry aged meats but I do not enjoy dry meat. Too bad we got dry meat with nicely caramelized onions on a very bready slider role. All and all I got dry out of this bit and it was certainly not worth the time spent on the line.

Gorilla Cheese NYC did not do much better. Their bread was soggy and the cheese was cold, despite being melted and just tasted like your typical processed American cheese on soggy buttery white bread. The only redeeming quality from this stop was the greasy tater tots. They were crisp and flavorful despite leaving my fingers, and tongue with a little layer of grease after consumption. All and all if you were going with your friends for a food and wine scavenger hunt in NYC, this was the place to be. But, if you went for the food; you may have been seriously disappointed with the large wait times and confusing materials provided by the food and wine festival creators. 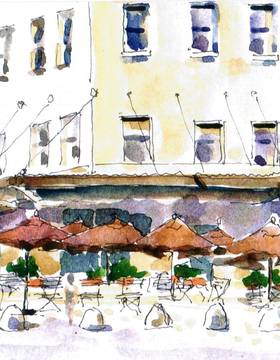 Being press sure does get you going to a lot really unique and different places inside and out of Manhattan to try out and review.  Normally my reviews tend to be a mixture of mostly good but some things that can be improved on.  For Macelleria, in the heart of the meat packing district, it is not only all good, it’s freaking amazing.  Macelleria was part of New York City’s first ever Italian Dine Out Week, which featured twenty three prominent Italian restaurants located all across New York City.  This one stood out to me for its location and great buzz I have heard about it, and boy did it not disappoint. 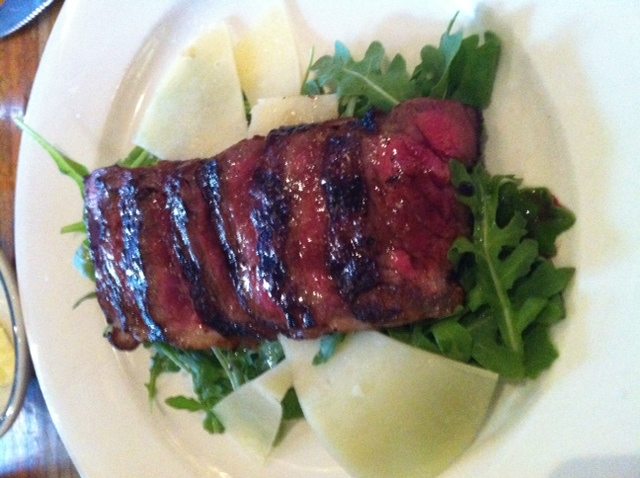 My friend and I each chose an appetizer, entree and dessert for us to taste and try out.  The two big highlight dishes in my opinion was the Branzino and the Steak option that I chose.  The steak was thinly sliced but such a fantastic cut of meat and the flavoring that came with it was truly phenomenal.  Other options that we tried out that were just as fantastic if not better was the Carpaccio and Prosciutto de Parma, which is where the Olive Oil truly shined in anything we ate.

I got to know Violetta Bitici and her father Sergio, who are the owners of the esteemed restaurant.  The location has been around for over a decade and boasts an incredible array of authentic and imported Italian delicacies (one more noted on mine and my friends end was the best tasting Olive Oil I have ever had).  During my time there I got to know more about the background of Macelleria, especially Sergio Bitici’s journey to being quite the restauranteur from his days growing up in Italy to a force to be reckoned with in the New York City restaurant scene.  I also met head chef Diego Bigucci, who from the food that he made me and my friend deserves a ton of James Beard awards and anything else that might be out there for him to win.  All three of them are class acts  in their own ways.

If you are in the Manhattan area and are craving all things Italian, stop on down to Macelleria on 48 Gansevoort Street and see for yourself why it is truly the best of the best. Macelleria offers lunch from 11:30 am to 5 pm, then dinner from 5 pm to 1 am on Monday through Friday, and on Saturday/Sunday offers brunch from 11 am to 4 pm, and dinner from 5 pm to 1 am.  For more info, log on to their official website.