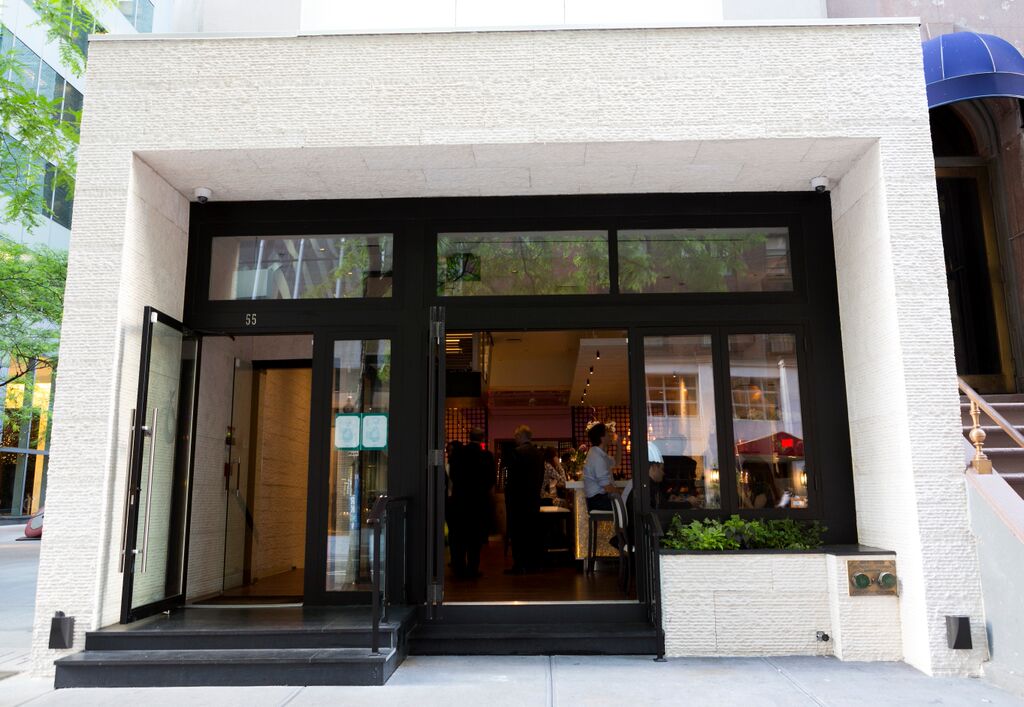 Sometimes its good to try something new and get yourself out of the everyday norm that has become your food situation.  Especially when it comes to the variety of foods you can have for the ever popular event that happens all throughout New York City- weekend brunch.  With so many different options out there, including cuisines and locations, it can be hard to find something that best suits you and your palate.  If Greek, however, comes to mind when it comes to a cuisine that sparks your interest, you really should try Nerai located in Midtown East on East 54th Street between Madison and Park Avenue.

Midtown East is already such a beautiful part of Manhattan with several areas that you can find yourself in to appreciate why this is the best city in the world.  Nerai is another great example of this particular location. The place itself has a very calming presence with stunning architecture including fantastic floors and walls that exemplify the Greek lifestyle.  I prefer settings like this for brunch rather than your run of the mill location that can tend to get loud and rowdy where it should really be a place for you to recooperate from the late night that you had before.  I was also very impressed by the professionalism from the staff themselves, who kept me and my friend satisfied throughout the entire meal.  This part alone made the experience that much better.

Of course you can’t go to brunch without talking about the food itself!  I was quite impressed with the spread they gave us which of course had a Greek vibe and taste to it.  They have a great assortment of the usual cocktails you can have for brunch however if you wanted something Nerai-specific I would go with the Greek Island Ice Tea with Linden Honey and Lemon. Sweet and goes down really well all together. For starters I would recommend the Grilled Octopus with chickpeas, onions, capers and roasted red peppers and the Spinach Pies with spinach, feta and ouzo yogurt .  Two great starters that definitely had that Greek kick to them, in particular the pies with its yummy yogurt and the Octopus which was cooked to perfection.

For mains, I would go with one savory and one sweet.  For savory, the Maine Lobster Benedict with a poached egg and lobster hollandaise and the Tsoureki French Toast with bananas and seasonal berries will definitely fill you up in the best way possible.  The Lobster and hollandaise really bring that particular dish together and I really fell in love with the french toast as the berries and bananas on top really made it taste that much more scrumptious.  Each of these options comes with a Bloody Mary, Mimosa or Persephone, so there is an added incentive- alcohol!

To finish the meal with something sweet (which I always recommend) I would go with the Lavender Mousse with pineapple, lavender honey and pecans and the Fiji Apple Bougatsa with semolina custard and cinnamon.  I loved the shaved pineapple with the mousse as well as how sweet yet filling the Bougatsa really was.  Overall, a 10 out of 10 in my book.

For more information on Nerai, please check out their official site.  Happy eating everyone! 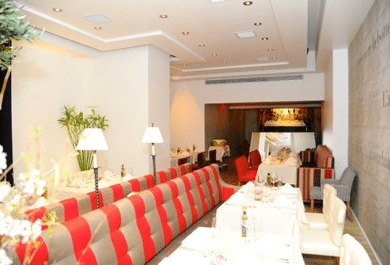 A week ago I got the opportunity to bring a friend of mine to one of the hottest new eateries in the midtown east area called Fabio Cucina Italiana.  The brand new space has opened to some great fanfare and buzz alike, and I was eager and excited to see what all the buzz was about.  The space alone felt quite contemporary and had lovely designs, hardwood floors and pops of color that really made the whole place feel warm and inviting (see the picture above).  This also was my first true “Fine Dining” review that I have done for Manhattan Digest as we really got the 5 star, “Michelin” like experience there with the utmost professionalism from the wait staff, manager and executive chef Fabio Hakill, who prepared the meal for us.  Here is more information about him and the design of this beautiful place.

Fabio Cucina Italiana is owned by Executive Chef Fabio Hakill, an internationally trained chef whose career has spanned across two continents over the last 27 years. The Italian born chef first honed his culinary skills in Rome at the famed restaurant Il Caminetto in Rome, Italy. He moved to New York City in 1994 where he cooked in the kitchens of Park Side Restaurant, Piccolino, and finally as a partner and chef in Midtown. During his nearly three decades as a chef, the 48 year old has had the pleasure of serving his delicious Italian cuisine to a prestigious clientele that includes many bold faced names, including Colin Powell, Alec Baldwin, and Joe Torre. In 2013, Chef Fabio decided it was time to realize his dream restaurant and in February of this year, will officially open the doors and welcome guests to experience his cooking at Fabio Cucina Italiana on East 52nd Street.

Italian designer Dominic Gasbaroly created a restaurant rich with charm and character. From the birch canopies perched above the restaurant’s windows and entrance, to the trees and greenery that breathe life inside, no expense was spared to create a warm and inviting space for diners to enjoy. Large red and gold banquettes run down the main room, separated by a table of Italian cookbooks from around the world. Italian sayings adorn the walls and two gothic chandeliers hang over a private dining area for 12 in the main room. Fabio Cucina Italiana also features a downstairs dining room for up to 25 guests with projection capabilities.

Now of course onto the food!  Some of the stand out dishes that they presented to me and my friend include the Branzino which was served in a salted crust complimented with a delicious side sauce, the Calamari Fritti which was served with a really yummy spicy tomato sauce, and my personal favorite which was the Linguine Neri All’Aragosta which is black linguine with Maine Lobster in a spicy tomato sauce.  I have never had black linguine before but the taste was spectacular with the Maine Lobster and the sauce that went along with it.  As stated before, the hospitality me and my friend experience was beyond anything I have ever experience before so this dining experience was a 10/10 for sure with all the factors taken in.  Definitely a place I would recommend going to on your next date or family gathering!

So the next time you are in midtown stop on by to Fabio Cucina Italiana.  It is a great experience that is not to be missed!  Check out their official website for dates and times they are opened as well as a better look at their innovative and amazing menu. 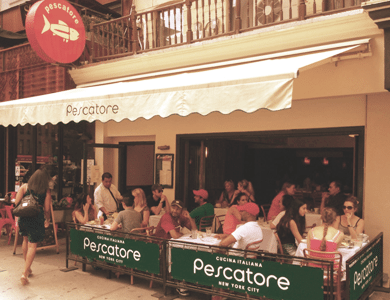 Pescatore and great food go together like Peanut Butter & Jelly.

I am the first person to admit that fish to me is never the first thing I am looking to order when I go to a restaurant that has a meat or pasta option on the menu.  So when I first heard of a place called “Pescatore” I had to mentally change my game palate up due to thinking that everything on the menu was fish related.  I was wrong, yet at the same time pleasantly surprised with the entire meal (which included some of the best fish I have ever had, more to come later).  My friend and I went there a week ago and were treated like kings in so many different ways.  Here is more about our great experience.

Pescatore itself has such a warm and friendly vibe to it that is nestled in the heart of Midtown East.  The service was spectacular throughout the meal, and I got a chance to talk a little more with the owner Charles Devigne, who is celebrating the restaurant’s 20th Anniversary this year (Congrats!).  He started us off with a bevy of appetizers, all of which were unique in their own right but had great depth of flavors to them.  My personal favorite was the risotto balls with the truffle aioli sauce, something that we got a sneak peek of because they aren’t currently on the menu! Hooray for behind the scenes access!  We were told this was something that was being placed back on the menu eventually, to which I agree with that decision.  Better yet, do it sooner because my mouth is watering thinking about how damn good they were.  One thing that my friend was a big fan of that didn’t really work for me was the ricotta cheese with chives, pease, hazelnuts, honey, and mint.  It might have been a bit much for my palate but it was still tasty to say the least.

We also were treated to two different types of pasta dishes. One was Linguine alla Vongole which included steamed little neck clams with Chorizo, green onions, toasted garlic and fresh parsley.  The other was Spaghetti Carbonara with pancetta, caramelized onions, pecorino and egg.  Once again, my friend and I had a difference in opinion as I thought the latter was better than the former, yet both were equally delicious.  It was just a matter of our taste buds.  Out of all the dishes that we had, hands freaking down the best thing from the entire night was the Chilean Sea Bass.  Chilean Sea Bass is one of the few seafood that I really enjoy personally, as it is foodporn to the umpteenth level.  I can say this was the best Sea Bass I have ever sank my lips into, and that is because the supporting cast really made the star shine.  The bass was surrounded by peas, porcini farro and brown butter vinaigrette with a cauliflower, currant and almond condiment.  So amazingly yummy.

After all of that, the last dish that we had of course was dessert, which was a homemade cheesecake.  Delicious and then some.  Overall, an 8.5 out of 10 in my book.  Great place to go to if you want some hearty Italian cooking with an edge and an overall great environment.  Check out Pescatore’s official website for more information on menus and location.  Definitely worth the visit!