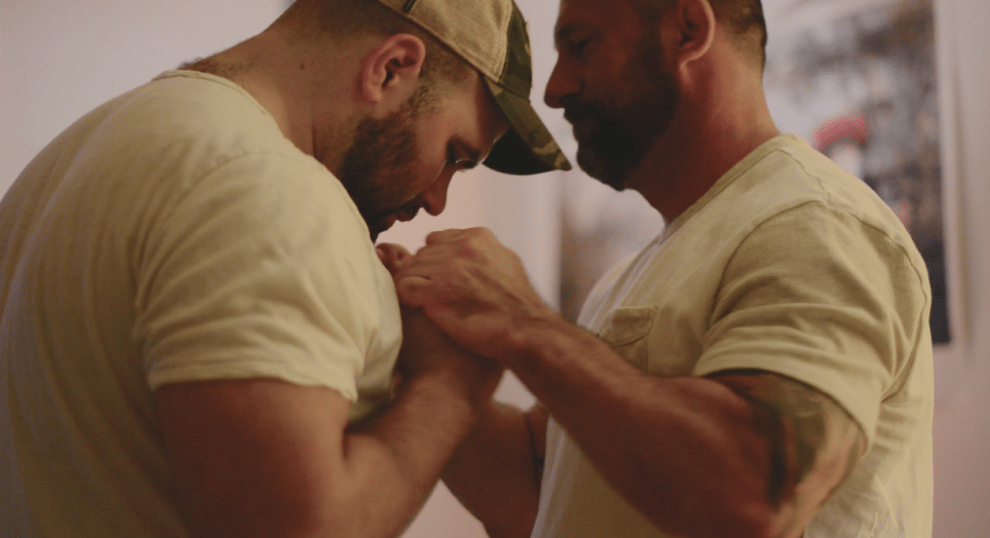 Something I happen to love is when an artist goes outside the grain and makes something of quality that gets people thinking.  That is what Mike “MRF” Flanagan has done with his latest video “Trying“, which details the high’s and ultimate lows in a relationship.  MRF, who is an openly gay musician based out of Boston, is someone that I met a couple of months ago at the one and only Bear Week In Provincetown, Mass.  After hearing the beautiful music that he made on both his freshman and sophomore albums, I knew I wanted to interview him as he was someone I saw on the rise.  You can check out that full interview here.

As for “Trying” which is off of his phenomenal sophomore album “Mob Music”, the song and video both are beautiful in its lyricism, sound and portrait of the end of a relationship.  Only being out for 3 days, yes 3 days, the video itself has received 20,000 views and counting and has amassed quite the positive feedback from the LGBT community and outside of it as well.  I got to sit down with MRF again to discuss the video at hand, the concept in making it and what is next for the chart topping piano player.  Take a look.

Hey MRF! The “Trying” video is simply beautiful! Tell me about the concept behind it.

The concept is about not being able to find resolution in your most significant relationship ending. The good was everything you’ve ever wanted, but ultimately that person is never going to allow the two of you to be together. And therefore, it’s about being in position where grieving that loss is not possible and you’re haunted by the memories of all you shared with that person. I left the ending ambiguous for a reason. I wanted people to relate to it in their own way and plug in their on experience as to how and why their own personal relationship ended.

How did you go about casting your hunky costar to play the man you are in a relationship with?

I’ve known Mladen for about 5 years now. He’s an absolutely stunning man and a good friend. I knew his look would be amazing on camera and I also thought the chemistry between us in this narrative would work really well. His look and demeanor is so masculine, I felt it important to represent masculine men in a narrative that was loving and normal and sensual and not just hyper-sexual.

Where was the video shot and how long did it take to put everything together? Were you a part of the creative process as well?

The video was shot in Boston. We did three days of shooting and about two weeks of editing. We shot at a rehearsal space in Boston, at a friend’s place and partly at my place. I wrote and directed the scenes and Steve Osemwenkae shot the video and co-directed.

The song “Trying” alone is stunning. Can you tell my readers what you think the ultimate message of the song is?

The main message is that despite you and that person having it all together, there is something in the way and her or she will not allow the relationship to be. I think the most potent lyric in the entire song is “When will you believe in us” and that really sums up the entire message.

You recently stated that this is your most personal song to date. Why is that?

I wrote this song about my last relationship. I was a total wreck as it was nearing the end and both the lyrics and melody came to me simultaneously. I sat with Lisa and sang the reference for her and within a few minutes, she was singing it in the booth as though she wrote it. I had Justin do 2 harmonies with her melody and the harmonies absolutely transformed the song. It’s my most personal but also favorite song to date.

When it comes to LGBT music videos, we usually don’t see ones like this that show two men in such an intimate, physical embrace. What are your thoughts on that?

One of the best parts about making this video is the overwhelming amount of messages I’ve received from people from all over saying that they cried and finally felt represented. I think giving that visibility to the diverse stories within the massive umbrella that is the LGBT community at large, is important and tells people that their story is worth telling.

Now that the video is released and is trending high on YouTube, what are you hoping that people come away with it upon watching?

I of course want the video to speak to people but I’m really hoping this turns a lot more people onto my/our music and the chemistry/magic that we ‘mob music’ have together. And follow me and us on our journey as we create more for you.

What is next for you?

I have already started mapping out the next album which will probably surface in mid 2015. In the meantime, we’re considering doing a video for another song off of the Mob Music album called “This Love”.