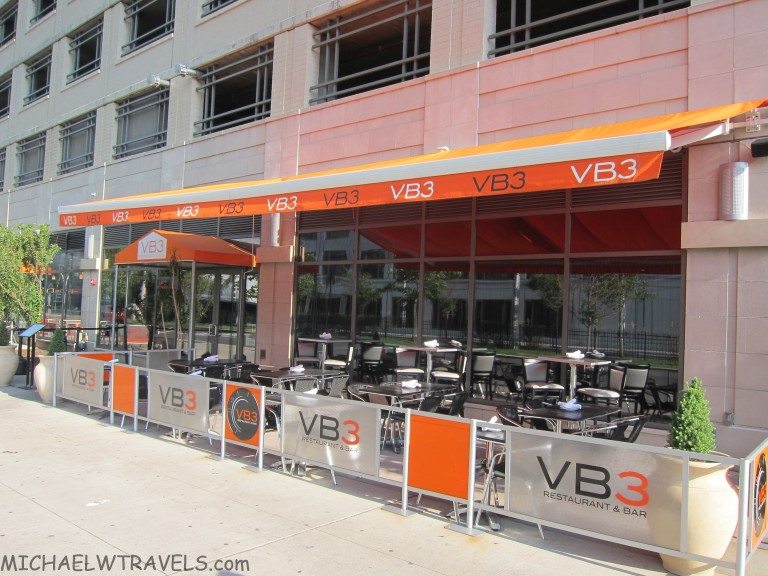 As far as I am concerned, if Italian food is good… you travel for it.  With the endless options you can try with one of the best cuisines in the world, you might be surprised that there are good places that can provide such a treat for your palate that runs outside of New York City.  Shocking, right?  One of these places is called VB3, short for Villa Borghese, located right off The Path Train in Jersey City.  When you can master a hard combination of exquisite Italian cuisine in a sports bar setting, you must be doing something right.  And VB3 does that… and more.

END_OF_DOCUMENT_TOKEN_TO_BE_REPLACED

As great as the endless variety of restaurants are in Manhattan and the five boroughs, sometimes you have go to outside the grain and see what else is out there in the foodie world that I love so much.  I have spent quite a bit of time recently in Hoboken, New Jersey for a multitude of reasons.  My best friend from college lives there now and I find it to be very up and coming when it comes to the food and bar scene, and wanted to experiment a bit more and see what was out there.  Luckily for me, I found the gold mine in terms of taste & hospitality in the restaurant Little Town, which is located right on the water in Hoboken.  When I was granted access to cover it with my best friend, we purposefully starved ourselves that morning just so we had our game faces on when it came to what we were about to eat.  Touchdown indeed.

Little Town, a restaurant that has only been opened for a short period of time, is actually known a bit more on a national scale due to its exposure on Bravo’s wildly successful “The Real Housewives Of New Jersey” which chronicles part owners Albie & Chris Manzo opening up the restaurant with the advice from matriarch Caroline.  Since those episodes aired Little Town has done a complete 180 and is now fully furnished, spacious and a wonderful atmosphere.

As mentioned earlier, part of what makes a great dining experience that much better is the hospitality, and it shows in executive chef Jordan Andino.  I got to know him throughout the meal and developed such an appreciation for his hard work getting to where he is now.  He was raised on Toronto, Canada and began a love for cooking at a young age and kept that tenacity going throughout his adulthood by training himself with world renowned chefs from Wolfgang Puck and Thomas Keller.  After graduating from Cornell University’s Hotel School of Administration, he developed himself as a star in the culinary world by running a multitude of restaurants and even recently appearing on The Food Network’s “Chopped” where he made it all the way to the dessert round.  Now he runs both the New Jersey Little Town location as well as the one in Union Square as well as another restaurant called Side Bar.  Something that I respect more than anything is that just like my mother with her culinary career he wasn’t classically trained and got himself where he needed to be on his own.  Also, my friend enjoyed how cute he was which is always a plus 🙂

Now onto the freaking food, which was amazing.  Jordan gave us quite the variety of food that he makes, from appetizers to brunch to lunch to quite possibly the most filling and delicious dessert I have ever had.  Some of the standouts to me were the “Manzo Balls” (tee hee), which came with a couple of Crostini’s for dipping in the warm and flavorful tomato sauce that accompanied said balls.  Great flavor on both and a delicious way to start things off.  Another appetizer that he presented us that me and my friend really enjoyed were the Little Town Rice Balls, which were stuffed with New Jersey Taylor Ham and Cheese and was complimented with a yummy hollandaise sauce.

You can’t go wrong with wings, you really freaking can’t!  So hands down my favorite meal of all that Jordan presented at Little Town was their “Garbage Wings” which are flavored with a homemade hot sauce, barbeque sauce and fresh garlic with blue cheese crumbles.  Had just the perfect mix of sweet and spicy that worked well with both mine and my friends palate.  He also unveiled two burgers, one that is very popular at Little Town already which is the “Boss Burger” and a new addition to the spring menu which is their “Salmon Burger”.  I had a preference for the Boss Burger, which had melted fontina cheese and caramelized onions where my friend preferred the Salmon due to its flavor and texture.

We finished off with quite the decadent dessert, Fried Oreo Neapolitan.  Basically a Fried Oreo sandwich that had three different ice creams in the middle (Vanilla, Chocolate, Strawberry).  I mean the Fried Oreo alone was just scrumptious but when you add the cooling flavors of ice cream on top of it made it that much better.  Honestly, it was a 10/10 experience for me and my friend and I cannot wait to hop on the PATH again soon to try out more of his delicious creations.

Next time you are in the Hoboken area please stop by Little Town and try it for yourself.  I guarantee you will not be disappointed.  For more information on Little Town and Chef Jordan Andino, check out their sites.  Happy Eating.